The Pfizer COVID-19 vaccine needs to be stored at minus 70 Celsius. Health care providers will need to store it either in dry ice for shorter stints, or in specialized freezers. 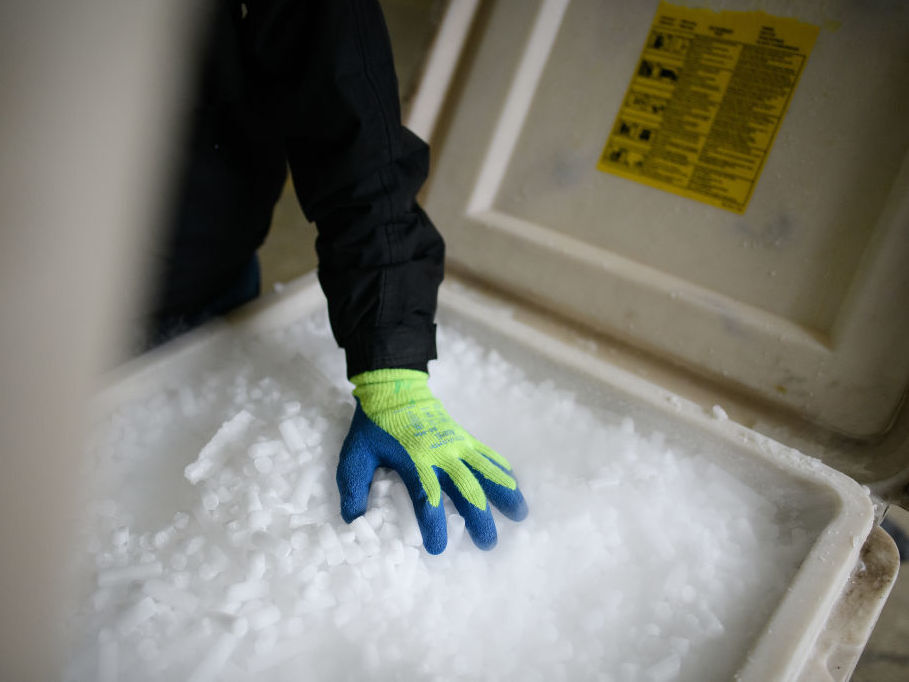 The Pfizer COVID-19 vaccine needs to be stored at minus 70 Celsius. Health care providers will need to store it either in dry ice for shorter stints, or in specialized freezers.

Two drugmakers, Pfizer and Moderna, have announced promising interim results for their vaccine candidates, raising hopes in the U.S. and abroad that the end of the pandemic may be in sight. But, if and when the vaccines are authorized by the Food and Drug Administration, distributing them presents a daunting challenge.

One big reason? One of the frontrunners in the vaccine race — the one made by Pfizer — needs to be kept extremely cold: minus 70 degrees Celsius, which is colder than winter in Antarctica. Moderna has said that its vaccine needs to be frozen too, but only at minus 20 Celsius, more like a regular freezer.

Since there will be limited vaccine doses at first, immunization managers across the country will need to have plans to distribute any and all vaccine doses that are available. For months, they’ve been puzzling over the particular challenges presented by the Pfizer vaccine, which requires these ultra-cold conditions.

“I believe it can be done,” says Debra Kristensen, a 30-year veteran of vaccine innovation and supply chains at PATH, an international nonprofit focused on public health. “Ebola vaccine, for example, was successfully used in a few African countries and also required this ultra-cold chain storage.”

Distributing vaccines in these conditions “is possible, but it’s definitely going to be much more expensive and more difficult,” she says. Pfizer has tried to calm concerns about the challenges presented by these cold temperatures. It has designed its own packaging to keep doses super cold with dry ice, so that they can be stored for a few weeks without specialized freezers (the packaging has been informally nicknamed “the pizza box”).

Moderna’s vaccine, Kristensen explains, “can be distributed in more of a standard fashion — health workers are used to it, facilities are used to it — it’s more normal.”

Here’s some background on why these vaccines need to be kept so cold — and how they differ.

Why the deep freeze? Think about M&Ms

To understand why these vaccines need to be frozen, it helps to understand a bit about how they work.

Both the Moderna and Pfizer vaccine candidates use a new approach to unlock the body’s immune defenses. The approach uses messenger RNA, or mRNA, to turn a patient’s cells into factories that make one particular coronavirus protein.

That protein kicks off an immune response as if there was a real coronavirus infection (to be clear, since it’s only one virus protein, there’s no way the vaccine could actually infect someone or make them sick with COVID-19). Then, if someone who was immunized gets exposed to the coronavirus later on, their body’s immune system will be able to fight it off more easily and they’re more likely to avoid serious illness.

It’s a vaccine technology that’s so new, no mRNA vaccines have ever been approved by the Food and Drug Administration.

Vaccines made from mRNA can be made much faster than older vaccines could, explains Margaret Liu, a vaccine researcher who chairs the board of the International Society for Vaccines and specializes in genetic vaccines. The problem, says Liu, is that mRNA is “really easily destroyed, and that’s because there are many, many enzymes that will just break it apart.”

Here’s an analogy: Think of the vaccine as a chocolate bar that melts easily. Just as there are ways to keep the chocolate from melting into goo, there are things the drugmakers did to protect their COVID-19 vaccines.

The first step, Liu says, was to modify the mRNA nucleosides — the “building blocks” of the RNA vaccine. “They’ve used modified versions because those are more stable,” she says. This would be like changing the chocolate recipe so it’s not quite so melty.

The next step was to use lipid nanoparticles, which, Liu explains, “is kind of like putting your chocolate inside a candy coating — you have an M&M, so the chocolate doesn’t melt.”

But even with the stabilized building blocks and lipid coating, the mRNA could still fall apart easily, which is why the vaccine is frozen.

“Everything happens more slowly as you lower the temperature,” Liu says. “So your chemical reactions — the enzymes that break down RNA — are going to happen more slowly.” It’s the same idea as freezing food to keep it from spoiling.

Liu says because the specific formulations are secret, it’s not clear exactly why these two mRNA vaccines have different temperature requirements.

“It just comes down to what their data is,” she says of Moderna’s vaccine. “If their data shows that it’s more stable at a certain temperature, that’s it.”

“Stress testing” to tease out these temperatures

It’s possible Pfizer’s vaccine could eventually be shown to be stable in somewhat warmer conditions — or for longer times out of the freezer.

To figure out a vaccine’s temperature requirements, drugmakers do extensive, time-consuming thermostability studies.

That research involves keeping the vaccine “at other temperatures to see how much you can stress the system,” explains Liu. She says you would start at ultra-cold temperatures, then try regular freezer temperature, then refrigerator temperature, and finally room temperature.

You might also put the vaccine at fluctuating temperatures, “to sort of mimic what would happen if [a vaccine shipment] got left on a loading dock and something went wrong,” Liu says.

Then drugmakers have to analyze the vaccine samples that have been put through all that and do tests (usually in mice) to see if the vaccine still works the way it’s supposed to.

All of this is measured in real time. “If a vaccine has a two-year shelf life at refrigerator temperatures, then the manufacturer actually needs to put the vaccine at that refrigerated temperature for two years and see if at the end the product is still effective,” Kristensen explains. “Given the urgent need for these COVID-19 vaccines, manufacturers will likely begin releasing them with shorter shelf lives and then they’ll expand the shelf life durations as they gather more data.”

Pfizer spokesperson Jerica Pitts told NPR “there are ongoing studies on this front,” but did not answer whether any imminent changes to the temperature requirements might be coming as a result of those studies.

“I doubt that [Pfizer] will be able to move away from the ultra-cold conditions during initial transport and storage,” says Kristensen “But if they can prove that the vaccine can be kept at refrigerated temperatures for some time after being removed from frozen storage, that helps facilitate distribution and administration out to more remote areas and to specific groups of people.”

Right now, Pfizer says its vaccine needs to be kept at minus 70 degrees Celsius, and can last in a specialty freezer for up to six months. The specialty shippers can hold up to five “pizza box” trays of vials, and be refreshed with dry ice every five days for up to 15 days to keep the vaccine at the right frozen temperature.

Even that presents challenges, though — a Pfizer scientist told a CDC advisory council in August it’s not supposed to be opened more than twice a day, and needs to be closed within one minute of opening. Once it’s thawed, the vaccine can be refrigerated for five days.

Moderna says its vaccine candidate is stable at regular freezer temperature — minus 20 degrees Celsius — for up to six months, and after thawing, it can last in the refrigerator for 30 days. It can also be kept at room temperature for up to 12 hours. This, explains Kristensen, is useful for health care workers in the field, “because now the vaccine doesn’t need to go in and out of the refrigerator each time it’s administered.”

Given the demand, if both Pfizer and Moderna’s vaccines are authorized around the same time, states will figure out how to use both in different settings.

Christine Finley, the immunization manager in Vermont finalizing that state’s distribution plan, says it makes sense to think about distributing Pfizer’s vaccine to larger population centers, not just because of its temperature, but because the smallest amount you can order is 975 doses (usually it’s more like 100 doses or fewer).

“[If] you have a large university where you’re going to be able to reach a larger number of people, that would make sense that you might consider distributing your ultra-cold there,” she says. The Moderna will work better, she says, “in areas where it might be more difficult to use up such a large order or they may not have the [cold] storage.”

CDC, the federal agency in charge of vaccine distribution and decisions about which groups receive the first shots, has tried to discourage health departments and hospitals from going out and buying expensive freezers to accommodate the Pfizer vaccine. But according to a recent report in Stat, wealthier hospitals are buying up specialized freezers, raising concerns that hospitals with fewer resources or in rural areas will be left behind.

Moderna’s announcement may temper those fears, although since Pfizer’s vaccine doses will be urgently needed as well, it doesn’t mean that ultra-cold storage is no longer an issue.

“I think the best news is that there may be two vaccines that are effective because that means we can reach more people,” says Finley. “We still need to show that they’re safe and they’re effective and we need to build trust with the public — so there’s still a ways to go, but this is good news.”

Despite the excitement and hopes riding on Pfizer and Moderna potentially having the first authorized COVID-19 vaccines, “this really isn’t a race,” says Liu. “Just by sheer numbers, we probably need multiple, multiple vaccines.”

And in the end, she says, “it may be that the second one or the 50th one is actually a better vaccine.”

Stop Trying To Win All The Time

Vaccine Unproven? No Problem in China, Where People Scramble for Shots

Three Fruit Salsa Recipes That Can Brighten Up Your Mood,…

Let’s Talk Sex | Tips for Dealing with Sexual Issues After…

Why You Must Start Taking Steps To Prevent Chronic Kidney…