Liz Truss played down her Remainer background and denied tax cuts will fuel inflation today as she vowed to defy ‘economic orthodoxy’ at the Treasury.

The Foreign Secretary ramped up her campaign after Tory MPs voted her into the head-to-head run-off against Rishi Sunak – with the prize for winning the ballot of party members the keys to No10.

The new PM will take over from Boris Johnson at the start of September, but they have a gruelling six-week schedule of hustings and media appearances to navigate first.

In a bullish interview on BBC Radio 4’s Today programme, Ms Truss laid out her case for a fresh approach. She dismissed her pro-EU stance in 2016, saying she ‘was wrong’, and said simply that her views had changed when confronted with her early dalliance with the Lib Dems.

Despite figures this morning showing government borrowing in June at the second-highest level ever, and interest on the £2.4trillion debt mountain setting a new record of £19.4billion, Ms Truss said tax cuts were the way to restore the UK’s fortunes and ease the cost-of-living crisis.

She warned that the current tax plans put in place by Mr Sunak when he was Chancellor – which include an increase in corporation tax from 19 per cent to 25 per cent in April – will lead to recession.

Asked what the current level of debt interest is, Ms Truss said: ‘I know we’ve got significant debt interest… tens of billions of pounds.’

But she added: ‘We have got the highest taxes for 70 years and we have got lower debt than the United States, than Japan, than Canada.

‘No other countries are raising taxes.’

She said: ‘My tax cuts will decrease inflation… We have had a consensus of the Treasury, of economists, with the Financial Times, with other outlets, peddling a particular type of economic policy for 20 years. It hasn’t delivered growth.’

Ms Truss, a former Treasury chief secretary, said: ‘What I know about the Treasury, from having worked there, is they… do have economic orthodoxy and they do resist change.

‘What people in Britain desperately need now is change. We need to unleash investment in our country, we need to get the EU laws off our statute books and be attracting more funds – for example from pension funds – into high-growth businesses.’

She said reducing National Insurance and cutting corporation tax ‘increases the supply side of the economy’.

‘The reason we have inflation is it’s a supply shock, combined with a slightly loose monetary policy over time.’

She added: ‘It’s not a gamble, it’s an economic reality that the higher taxes you have the more growth is choked off.’ 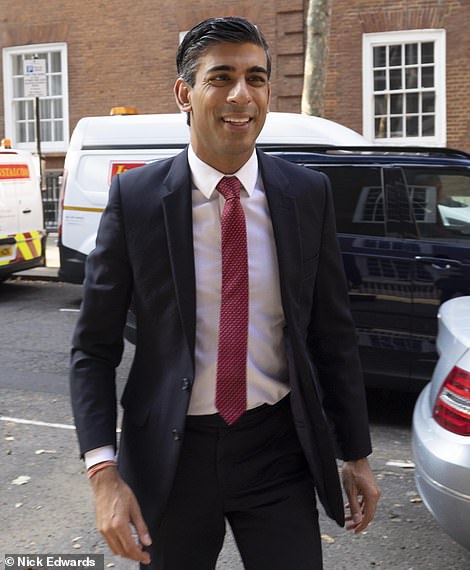 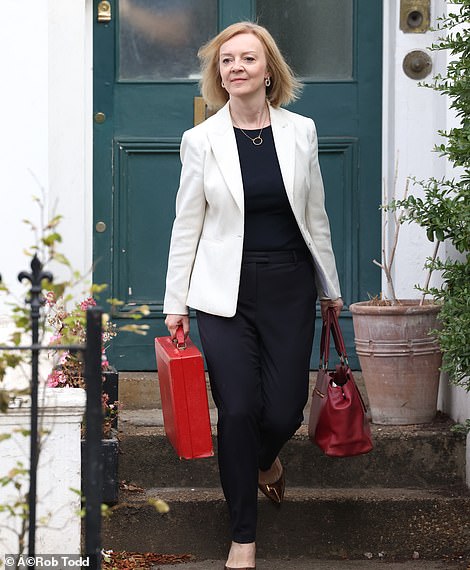 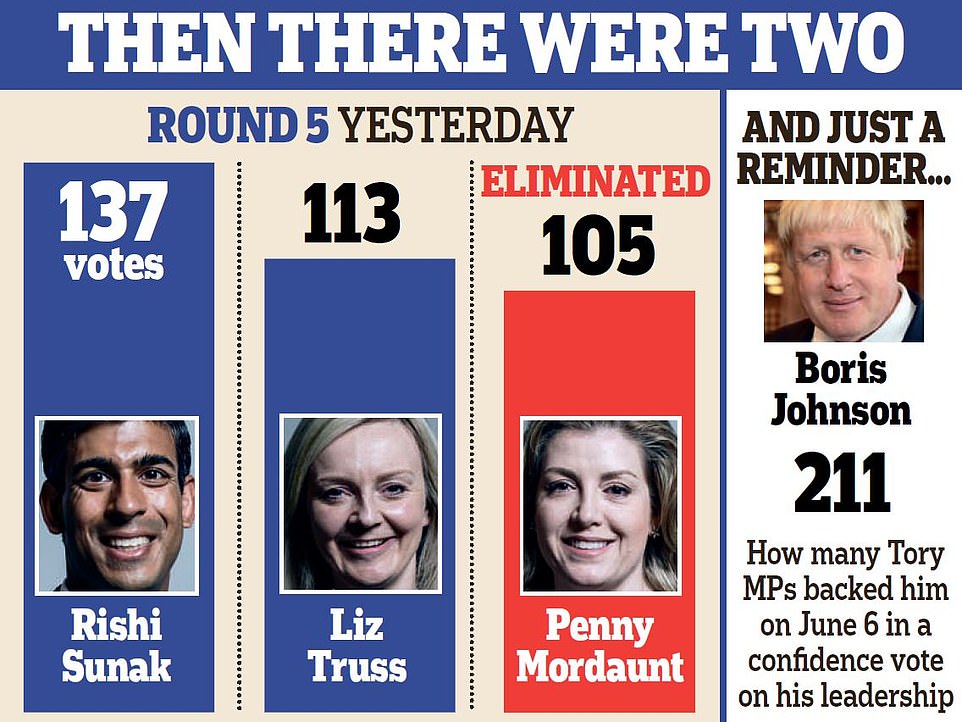 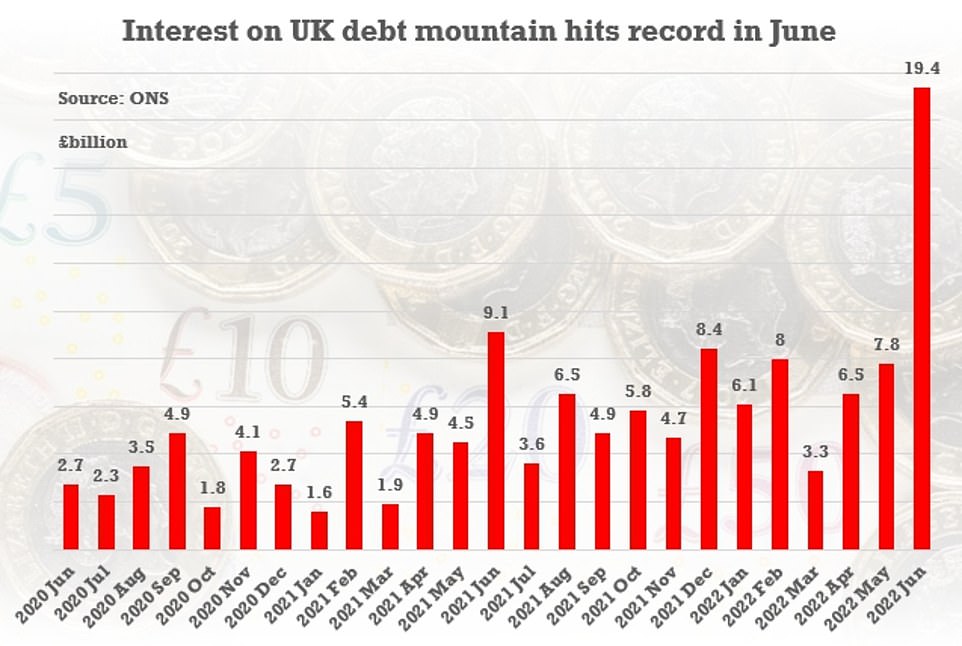 was more than double the same month last year, and a peak since records began in 1997 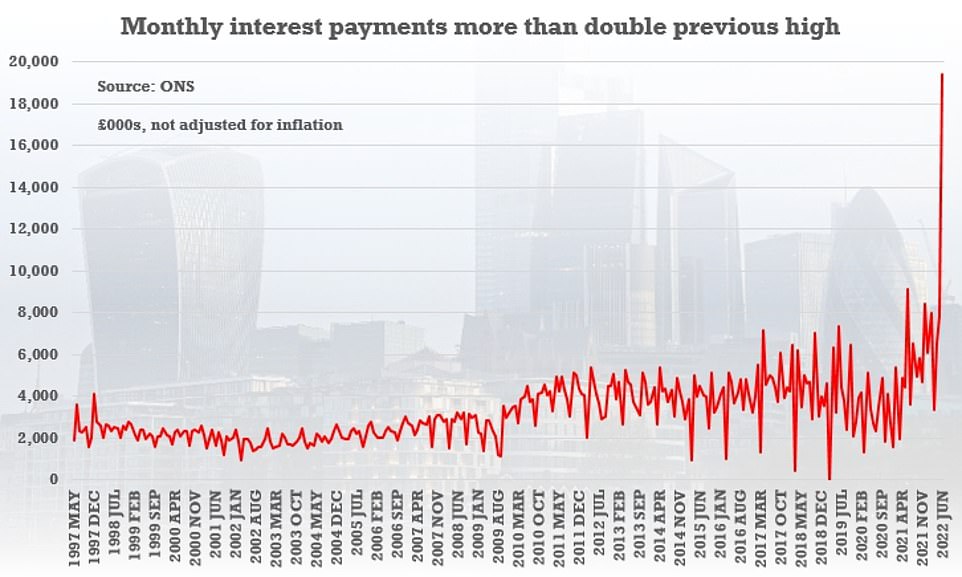 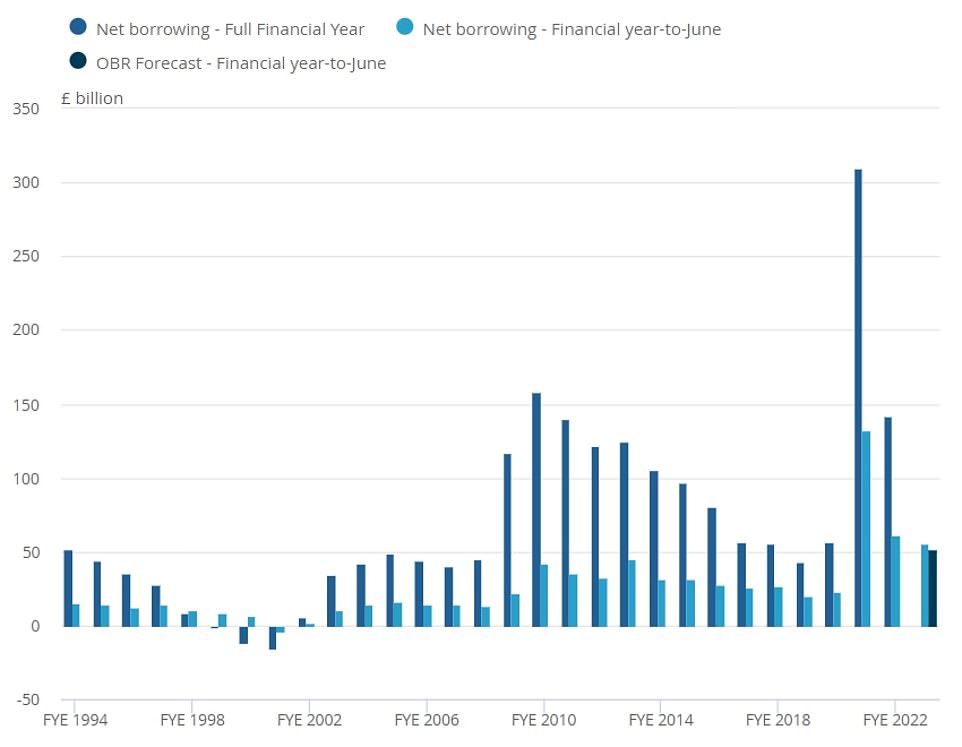 In an attack on the former chancellor’s record, she said the Government has been ‘going in the wrong direction on tax, with the tax burden at its highest in 70 years’.

She pledged to hold an emergency budget to push through immediate tax cuts to ease the cost of living and encourage enterprise.

‘We cannot have business-as-usual managerialism on the economy,’ she writes.

‘I am the tax-cutting candidate who will help squeezed families by reversing April’s national insurance rise and suspending the green levy on energy bills.’

Ms Truss also promises to take on the ‘Whitehall Blob’ to drive through ‘tax-cutting, enterprise boosting, business-friendly Conservative policy’. And she signals that she will take on the Left in the ‘culture wars’.

‘The British people can trust me to govern as a Conservative,’ she writes. ‘I won’t apologise for Britain or who we are as a nation and will stand up to people who talk down our country, our history and our values. I reject dehumanising identity politics, cancel culture and the voices of decline.’

Ms Truss’s comments came as bookies installed her as favourite to claim the Tory crown.

Mr Sunak topped yesterday’s final ballot of MPs with 137 votes, but he faces a frantic few weeks to convince Tory party members to back him.

His final tally was well short of the 200-mark once predicted by allies and means he enters the second phase of the contest without an indisputable mandate from Tory MPs.

Multiple polls have suggested he starts the race less popular than Ms Truss among the party faithful. 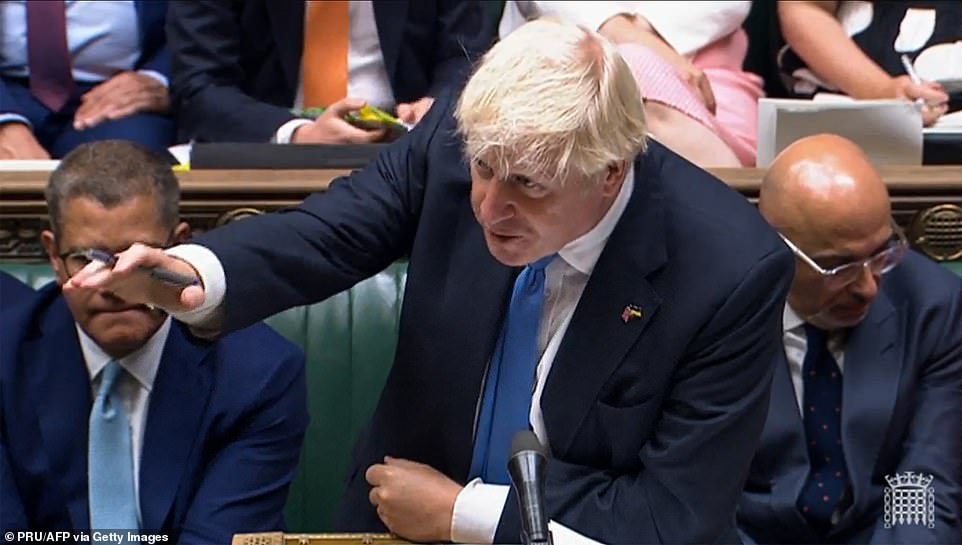 The former chancellor, whose resignation triggered Mr Johnson’s downfall, claimed he was the only candidate who could beat Labour at the next election.

‘We need to restore trust, rebuild the economy and reunite our country,’ he said. ‘I’m confident we can do that and we’ve got a really positive message to take out to all our members now – crucially, who is the best person to beat Keir Starmer and the Labour Party at the next election? I believe I’m the only candidate who can do that.’

Mr Sunak, Ms Truss and Penny Mordaunt were the final three in the parliamentary phase of the contest yesterday.

But Ms Truss leapfrogged Ms Mordaunt into second place in the last round, securing the backing of 113 Tory MPs. 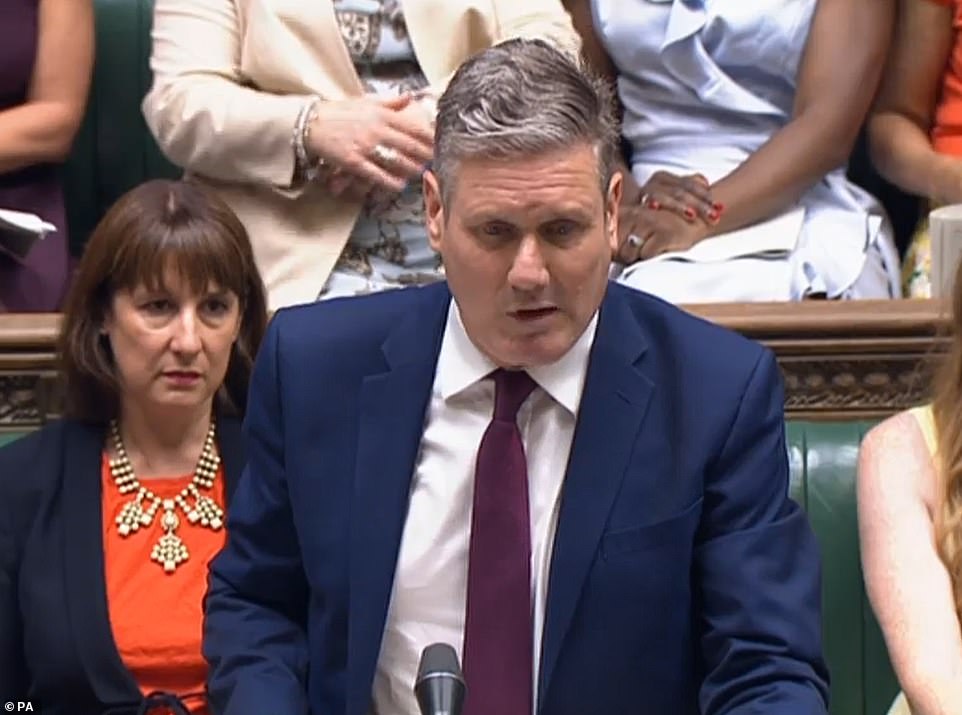 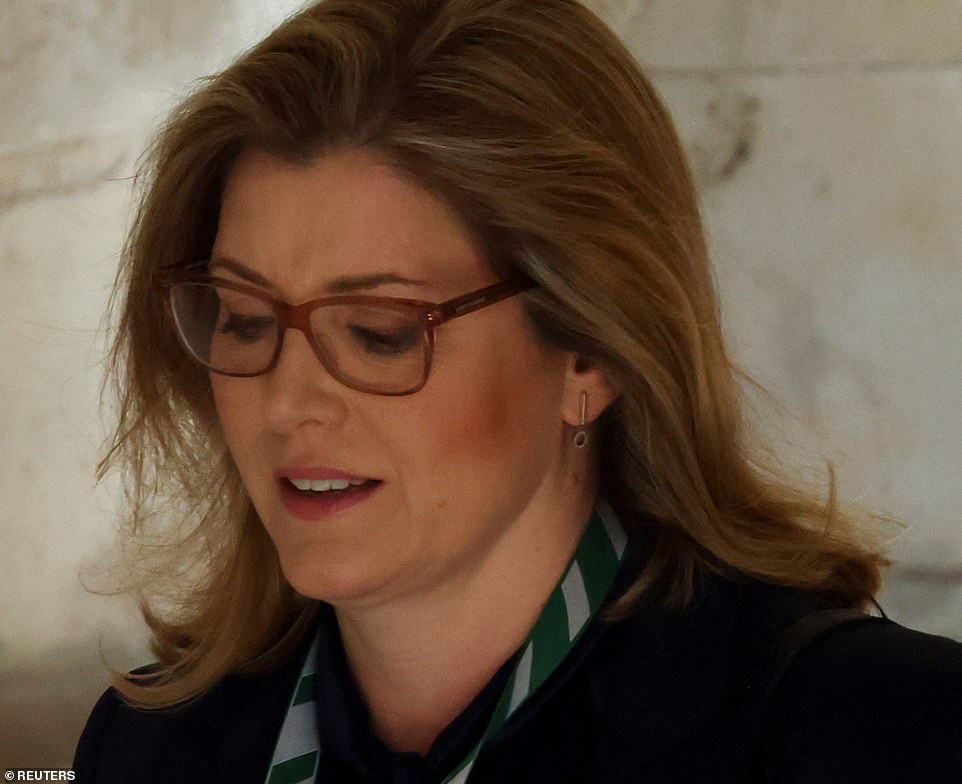 Penny Mordaunt, a Minister of State at the Department for International Trade, looks down as she is announced out of the Tory leadership race today

Trade minister Ms Mordaunt was second in all earlier rounds of voting but her campaign hit the buffers and she slipped into third place with 105 votes. She said: ‘We must all now work together to unify our party and focus on the job that needs to be done.’

Her allies later attacked the media for highlighting her changing views on issues like trans rights and claims that she failed to pull her weight as a minister.

Mr Sunak and Miss Truss will now campaign to win the votes of up to 200,000 Conservative Party members. Ballot papers will begin to land on doorsteps from August 1, and the ballot closes on September 2. The first of 12 regional hustings for party members will be held in Leeds next Thursday.

The result of the contest will be announced on September 5, and the winner is expected to replace Boris Johnson as prime minister the following day.

In these tough times, the Conservative Party is rising to the moment. I am proud to have attracted a broad base of support among my parliamentary colleagues for the leadership. Every candidate who stood has contributed enormously. I am now looking forward to making my case to Conservative members across our great country, and also to the wider public.

Over the next few weeks, I will be setting out a bold new plan that I will have ready to go from day one in Downing Street.

I will hit the ground running by immediately cutting taxes, growing our economy and unleashing the potential of everyone in the United Kingdom. This is a key part of my mission to build an aspiration nation, where people from all parts of Britain, from all backgrounds, can succeed on the basis of their talent and hard work alone.

That is how I got to where I am today, and that is what I want for everyone in our country. 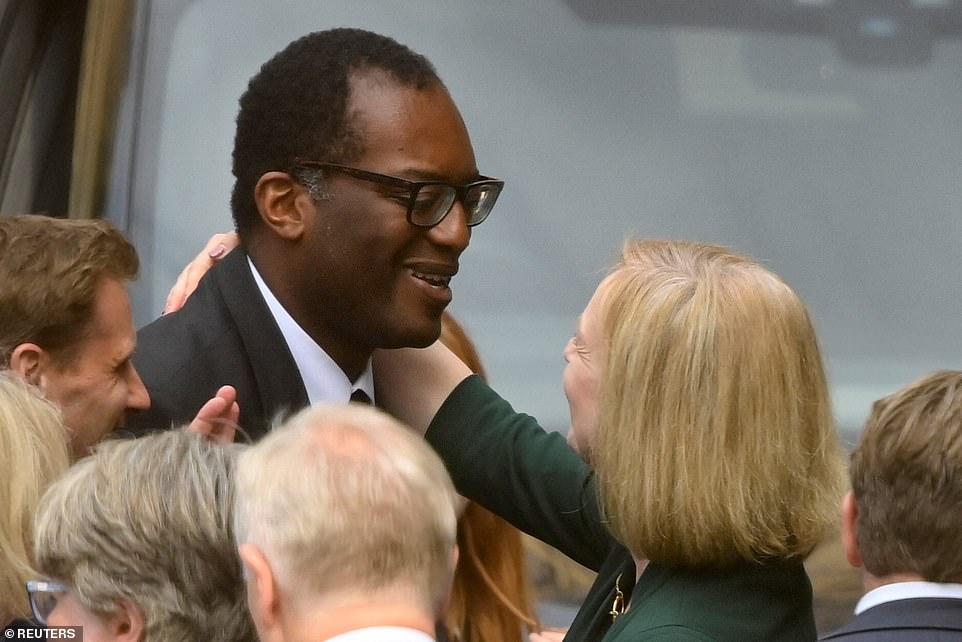 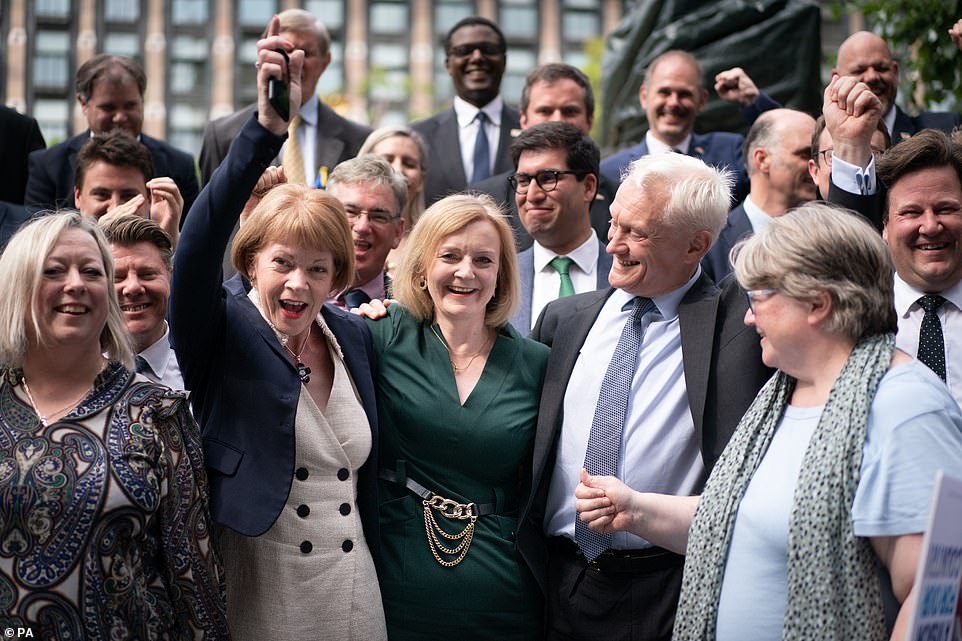 I didn’t come from a traditional Conservative background. I grew up in Paisley and went to a comprehensive school in Leeds. I remember the lip service paid to equality, only for children from disadvantaged backgrounds to be let down.

I entered politics to stop this ‘soft bigotry of low expectations’ and bring equality of opportunity for all. My approach is rooted firmly in Conservative values of aspiration, enterprise and freedom, which I know are shared across the country.

As prime minister, I will work night and day to deliver on my promises. I will be relentlessly focused on the people’s priorities, from the cost of living to seizing the opportunities of Brexit, to making the streets safer. The central issue at the next election is going to be the economy. We have been going in the wrong direction on tax, with the tax burden at its highest in 70 years. The central battleground will be about whether we go for growth and cut taxes, or carry on with business as usual and tax rises. 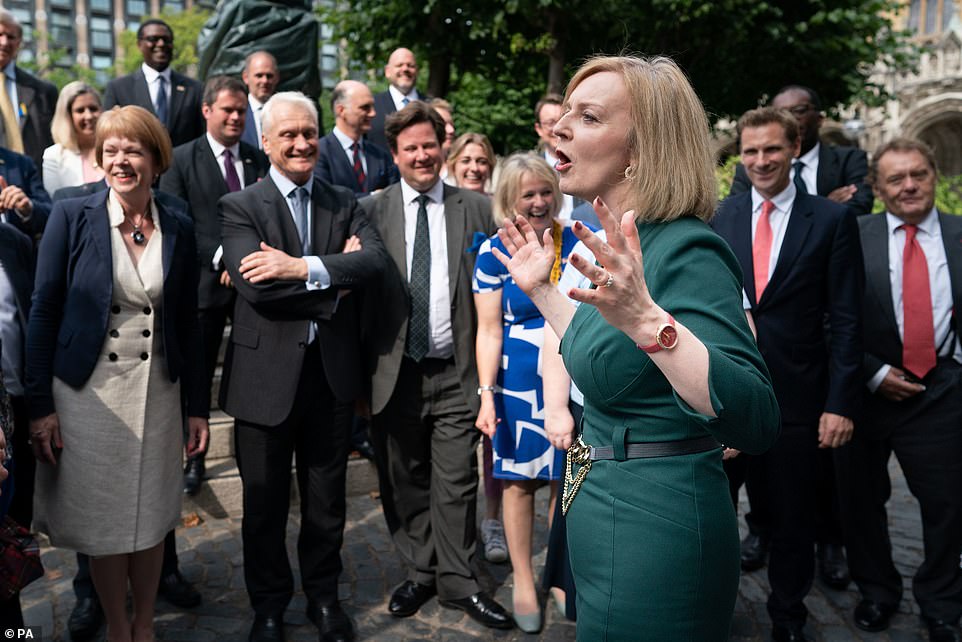 We cannot have business-as-usual managerialism on the economy. I am the tax-cutting candidate who will help squeezed families by reversing April’s national insurance rise and suspending the green levy on energy bills. I will move to bring in an emergency budget to get on with doing this quickly, and announce a spending review to find more efficiencies in government spending.

I will drive tax-cutting, enterprise-boosting, business-friendly Conservative policy through the Whitehall Blob to help working families.

The British people can trust me to govern as a Conservative. I won’t apologise for Britain or who we are as a nation and will stand up to people who talk down our country, our history and our values. I reject dehumanising identity politics, cancel culture and the voices of decline.

I am determined to win the fight for freedom at home, namely the freedom for people to live the lives they want. The economy isn’t just about numbers on a spreadsheet but livelihoods, hopes and ambitions. That is why I would drive decisive reforms to unleash people’s potential and advance equality of opportunity.

I believe in Global Britain’s great potential as a sovereign nation. 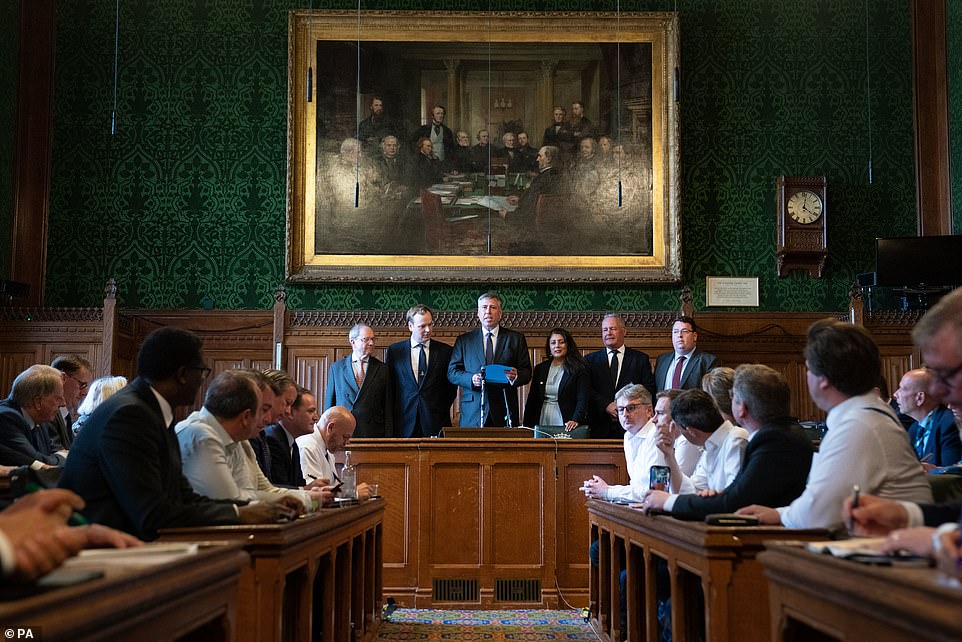 Sir Graham Brady (third from left) chairman of the 1922 Committee, announces the results of the ballot giving the final two candidates, Liz Truss and Rishi Sunak

As prime minister, I will accelerate our regulatory divergence from the EU and create new low-tax opportunity zones to drive growth and investment across the country.

I will help Britain lead the world in tackling aggressors and in advancing and defending freedom and democracy, continuing to take as tough a position on Vladimir Putin as prime minister as I have as Foreign Secretary.

This is a defining moment for the country. The global economy is in difficulty, we face a cost of living crisis here at home, and our enemies are emboldened abroad. To steer our way through the storm, we need strong leadership and a bold approach that takes our economic policy in a new direction.

I will beat Labour in 2024 by governing as a true tax-cutting, freedom-loving Conservative. We know Conservative principles of low tax, equality of opportunity and a strong national defence are what the majority of the British people want. That is exactly what I will deliver.

As prime minister, I will lead us to economic growth, remain true to my Conservative philosophy and deliver for families up and down the country.

The British people can trust me to do what is necessary and right.

Confused About What To Wear? We Have Sidharth Malhotra’s Wardrobe Here

Is sleeping with a fan on bad for you? Expert on 4 ways it could impact your health

5 Reasons Why You Should Get Your Pet Sterilised