Unconscious Bias Crops Up In Health Care, Even During A Pandemic : Shots

Karla Monterroso says after going to Alameda Hospital in May with a very accelerated heart rate, very low blood pressure and cycling oxygen levels, her entire experience was one of being punished for being ‘insubordinate.’ 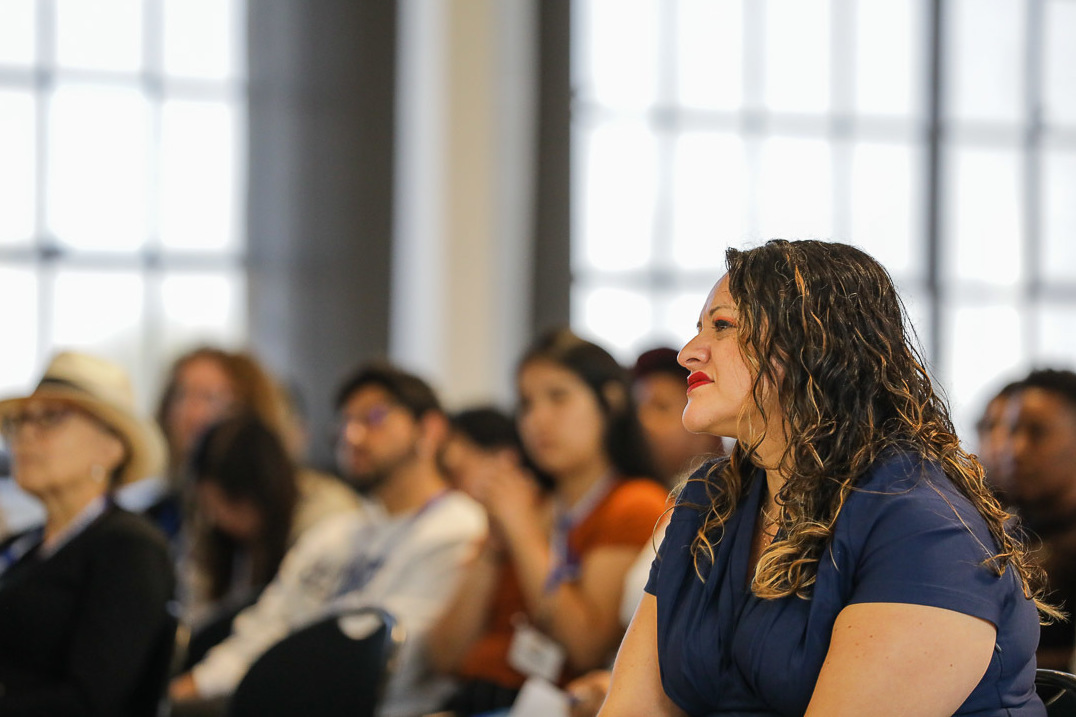 Karla Monterroso says after going to Alameda Hospital in May with a very accelerated heart rate, very low blood pressure and cycling oxygen levels, her entire experience was one of being punished for being ‘insubordinate.’

“That night I had written down in a journal, letters to everyone I’m close to, the things I wanted them to know in case I died,” she remembers.

Then came a new batch of symptoms in the second month, headaches and shooting pains in her legs and abdomen that made her worry she could be at risk for the blood clots and strokes that other COVID-19 patients in their thirties were starting to report.

But still, she wasn’t sure if she should go to the hospital.

“As women of color, you get questioned a lot about your emotions and the truth of your physical state. You get called an exaggerator a lot throughout the course of your life,” says Monterroso, who is Latina. “So there was this weird, ‘I don’t want to go and use resources for nothing’ feeling.”

It took four friends to convince her that she needed to call 911.

But what happened in the emergency room at Alameda Hospital only confirmed her worst fears.

At nearly every turn during her emergency room visit, providers dismissed her symptoms and concerns, Monterroso says. Her low blood pressure? That’s a false reading. Her cycling oxygen levels? The machine’s wrong. The shooting pains in her leg? Probably just a cyst.

“The doctor came in and said, ‘I don’t think that much is happening here. I think we can send you home,'” Monterroso recalls.

Her experiences in the medical system, she reasons, are part of why people of color are disproportionately affected by the coronavirus. She says it is not just because they’re more likely to have front-line jobs that expose them to the virus, and the underlying health conditions that can lead to a more serious COVID-19 infection.

“That is certainly part of it, but the other part is the lack of value people see in our lives,” Monterroso wrote in a Twitter thread detailing her experience.

I’m writing this because all the coverage of Latinx and Black death as a result of Covid is being covered like it’s JUST the pre-existing conditions of racism that make us susceptible. That is certainly part of it, but the other part is the lack of value people see in our lives.

Research shows how doctors’ unconscious bias affects the care people receive, with Latino and Black patients being less likely to receive pain medications or get referred for advanced care, when compared to white patients with the same complaints or symptoms. Black and Native American patients are also more likely to die in childbirth from preventable complications.

In the hospital that day in May, Monterroso was feeling woozy and having trouble communicating, so she called a friend and her friend’s cousin, a cardiac nurse, for help. They started asking the doctor questions: What about Karla’s accelerated heart rate? Her low oxygen levels? Why are her lips blue?

The doctor walked out of the room. He refused to care for Monterroso while her friends were on the phone, she says, and when he came back, the only thing he wanted to talk about was Monterroso’s tone and her friends’ tone.

“The implication was that we were insubordinate,” Monterroso says.

“Well, you know, the CT scan is radiation right next to your breast tissue. Do you want to get breast cancer?” Monterroso recalls the doctor saying to her. “I only feel comfortable giving you that test if you say that you’re fine getting breast cancer.”

Monterroso thought to herself, “Swallow it up, Karla. You need to be well.” And so she said to the doctor: “I’m fine getting breast cancer.”

He never ordered the test.

Monterroso asked for a different doctor, and then for a hospital advocate. No and no, she was told. She began to worry for her safety. She wanted to get out of there. Her friends, all calling every medical professional they knew to confirm that this treatment was not right, came to pick her up from Alameda Hospital. They drove her to another hospital, UC-San Francisco. The team there gave her an EKG, a chest x-ray and a CT scan.

“One of the nurses came in and she was like, ‘I heard about your ordeal. I just want you to know that I believe you. And we are not going to let you go until we know that you are safe to go,'” Monterroso recalls.

“And I started bawling. Because that’s all you want, is to be believed. You spend so much of the process not believing yourself, and then to not be believed when you go in? It’s really hard to be questioned in that way.”

Alameda Health System, which operates Alameda Hospital, declined to comment on the specifics of Monterroso’s case, but said in a statement that it is “deeply committed to equity in access to health care” and “providing culturally-sensitive care for all we serve.” After Monterroso filed a grievance with the hospital, management invited her to come talk to their staff and residents, but she declined.

She believes her experience is an example of why people of color are faring so badly in the pandemic.

Experts say this happens routinely, and regardless of the doctor’s intentions or race. Monterroso’s doctor in the Alameda ER was not white, for example.

Unconscious bias in health care can emerge in high-stress settings

Research shows that every doctor, every human being, has biases they’re not aware of, says Dr. Rene Salazar, assistant dean for diversity at the University of Texas at Austin medical school.

“Do I question a white man in a suit who’s coming in looking like he’s a professional when he asks for pain meds versus a black man?” Salazar says, noting one of his own possible biases.

Unconscious bias most often surfaces in high stress environments, like emergency rooms — where doctors are under tremendous pressure and have to make quick, high stakes decisions. Add in a deadly pandemic, where the science is changing by the day, and things can spiral.

“There’s just so much uncertainty,” Salazar says. “When there is this uncertainty, there always is a level of opportunity for bias to make its way in and have an impact.”

Salazar used to teach at UC-San Francisco where he helped develop unconscious bias training for medical and pharmacy students. While dozens of medical schools are picking up the training, he says it’s not as common for hospitals. Even when a negative patient encounter like Monterroso’s is addressed, the intervention is usually weak.

“How do I tell my clinician, ‘Well, the patient thinks you’re racist?'” Salazar says. “It’s a hard conversation: ‘I gotta be careful, I don’t want to say the race word because I’m going to push some buttons here.’ So it just starts to become really complicated.”

Dr. Ronald Copeland says he remembers when doctors resisted these conversations. When managers suggested trainings in cultural sensitivity or unconscious bias, they were met with a backlash.

“It was viewed almost from a punishment standpoint: ‘Doc, your patients of this persuasion don’t like you and you’ve got to do something about it.’ It’s like, ‘You’re a bad doctor, and so your punishment is you have to go get training,” says Copeland, who is chief of equity, inclusion and diversity at the Kaiser Permanente health system.

These days Kaiser Permanente’s approach is rooted in data from patient surveys. The patients are asked if they felt respected, if the communication was good and if they were satisfied with the medical experience.

KP then breaks this data down by demographics, to see if a doctor may get good scores on respect and empathy from white patients, but not Black patients.

“If you see a pattern evolving around a certain group and it’s a persistent pattern, then that tells you there’s something that from a cultural, from an ethnicity, from a gender, something that group has in common, that you’re not addressing,” Copeland says. “Then the real work starts.”

When doctors are presented with the data from their patients and the science on unconscious bias, they’re less likely to resist it or deny it, Copeland says. At his health system, they’ve reframed the goal of training around the importance of delivering better quality care and getting better patient outcomes, so doctors are motivated to participate.

“Folks don’t flinch about it,” he says. “They’re eager to learn more about it, particularly about how you mitigate it.”

Her heart rate continues to spike, and doctors told her she may need gallbladder surgery to address the gallstones she developed as a result of COVID-related dehydration. She decided recently to leave the Bay Area and move to Los Angeles, so she could be closer to her family for the long recovery.

When Monterroso declined Alameda Hospital’s invitation to speak to their staff about her experience, she concluded it wasn’t her responsibility to fix the system that abused her. But she still wants Alameda — and the broader health care system — to take responsibility for the bias perpetuated in hospitals and clinics.

Monterroso acknowledges that Alameda Hospital is public, and it doesn’t have the kind of financial resources that Kaiser and UCSF do. A recent audit warned that Alameda Health System was on the brink of insolvency.

But her experience still haunts her. Monterroso is the CEO of Code2040, a nonprofit that works on issues of racial equity in the tech sector. Despite her professional status and experience working on these issues, she still needed to summon an army of friends to support her as a patient and make sure that she was heard.

“Ninety percent of the people that are going to come through that hospital are not going to have what I have, to fight that,” she says. “And if I don’t say what’s happening, then people with much less resources are going to come into this experience and they’re going to die.”

This story comes from NPR’s reporting partnership with KQED and Kaiser Health News.

Kaiser Health News (KHN) is an editorially independent program of Kaiser Family Foundation (KFF); neither have any affiliation with Kaiser Permanente.

The F.D.A. Wanted to Ban Some Hair Straighteners. It Never Happened.

Paxlovid Has Been Free So Far. Next Year, Sticker Shock…

Liz Earle Your Daily Routine Kit – The Gift That Gives…

Fatty liver disease: Symptoms may include waking up between…