How Jess Sims’ Father Played a Role in Her Fitness Journey 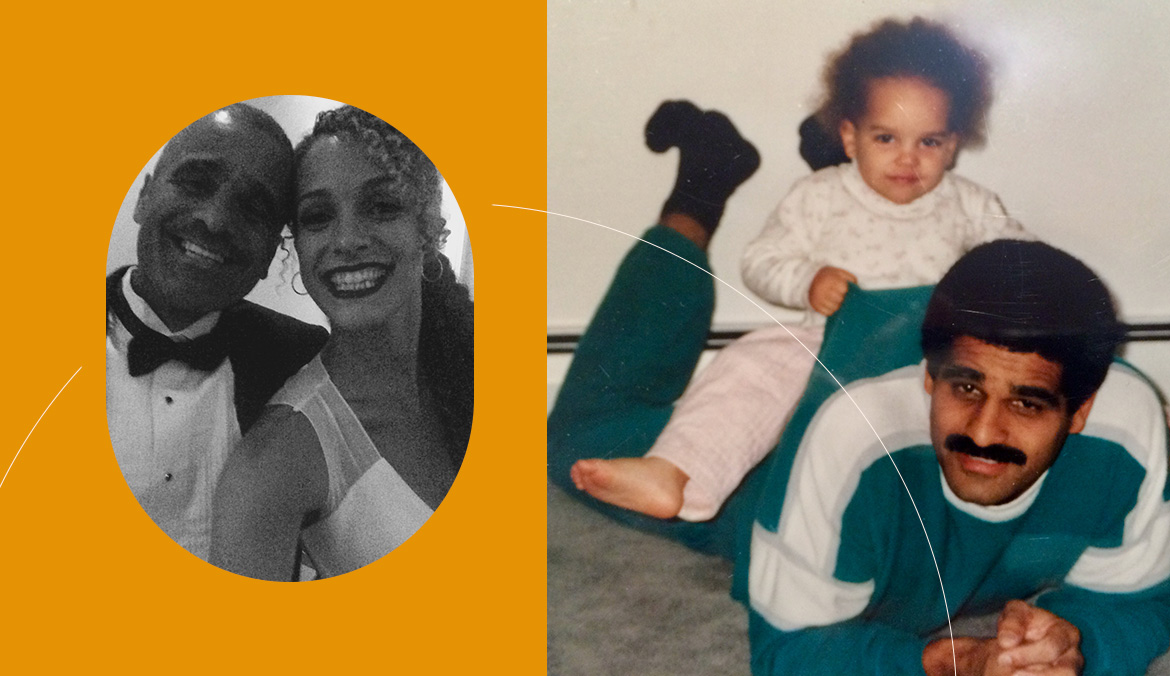 0
Share
From the time I started playing basketball at six years old, my father never missed a game. When I was on the team at Trinity College, he would leave work and drive two hours from Massachusetts to the Connecticut campus to see me play. He always stuck around after the game (no matter how long the coach kept us in the locker room) and then turned around and headed home to start his shift at his second job.

Growing up, I played every sport, but basketball really connected me to my father. He was raised in a rough-and-tumble household with four older brothers and one older sister, and playing basketball with them was something he looked forward to. To this day, he still holds basketball records at the high school we both went to. My dad was the person I could ask for feedback on how I played, and the one I could practice with on the little half-court in our backyard.

When I joined a co-ed AAU (Amateur Athletic Union) team at age twelve, it was the first time I remember him giving me pep talks and telling me that I could hang with the boys and not to be afraid of being small. As I got older, I was always the workhorse of the team and the player who did the dirty work—I had to wear knee pads during my games because I’d scramble so hard for the ball—which earned me a role as captain.

Yes, there is importance in hard work, but it’s also imperative that you’re confident in the work you do.

Whenever I was on the court, I hustled hard, passed the ball, and had tons of assists, but I wasn’t the highest scorer on the team. My dad was the one who would tell me: “Shoot the ball, and be confident in it.” He and my mom used to try and bribe me with $2 for every shot I took and $5 for every shot I made, but I was terrified of being the one to miss in a game-winning situation. They got me a frame with the quote, “You miss 100 percent of the shots you don’t take,” that I kept on my nightstand. Eventually, I was able to connect the dots of what it was trying to teach me, and that’s a lesson I still carry with me today. Yes, there is importance in hard work, but it’s also imperative that you’re confident in the work you do. That’s what I try to convey to people when they’re powering through burpees in my Peloton classes.

I love basketball as a sport, but being a part of a team was always the most important thing to me. When you’re on a team, you know that everyone has your back—it’s like you’re a part of a family. You wear the same uniform and you walk onto the court to the same music, but more than anything, you go through all kinds of the same trials and tribulations. At Peloton, I’ve found my adult team. When I see someone walking around the city with the Peloton logo on their backpack, it immediately gives me a sense of camaraderie. In my classes, there’s nothing better than seeing my teammates support each other—throwing out “congratulations” comments and high fives any time someone hits a milestone—because that’s exactly what teammates do. At the end of the day, you need your team in the same way you need your family.

Playing sports has taught me many lessons in life, and also helped me step into my Blackness. In the last few years, and particularly in 2020, my Peloton family has played a role in helping me to explore my identity as a biracial woman—which isn’t something I was ever comfortable talking to my parents and siblings about. My mom is Italian and my dad is Black and Portuguese, and I heard the term “ethnically ambiguous” a lot when I was younger.

If I reflect back, I realize how much started for me on the basketball court. Not only did it help me develop a close relationship with my father, but it also really helped me learn skills that I preach in my Peloton classes.

There wasn’t a lot of mentorship about how to navigate and be proud of being biracial, and it wasn’t until my AAU coach handed me an article titled “I’m Black and white—and proud to be both” when I was 13 that I ever even had a conversation about being biracial. Even now, I have a lot of imposter syndrome, where I feel like I fit in nowhere. I’m aware that when some people look at me, they see a white person, while others see a Black person.

When George Floyd was killed and the protests began last June, I was really stuck on what to say, but I got on Instagram and invited people into my discomfort. I told my community that my dad is a Black police officer and my mom is white, and I didn’t meet her father until I was in high school because he disagreed with my mom dating a Black man. And I was really vulnerable, and the number of messages I got from biracial teenagers who said, “I finally feel seen,” and from white mothers raising biracial daughters asking me for advice was staggering. I’ve learned that when you open up to people, they’ll open up right back to you, and it’s important for people to know that even in their darkest, most confusing moments, they’re not alone.

In September, I connected with another biracial woman, Lacey Schwartz, who reached out to me after taking my classes on Peloton Tread, and she has since become one of my closest friends. She is an incredible human being and producer who has dedicated her life’s work to the biracial experience, with one of her most recent pieces of work being The Loving Generation. We talk every week or so, and I feel like I have a big sister who is not only showing me the ropes of the biracial experience but is also opening my eyes to perspectives I’ve never even thought about before. My relationship with Lacey is a testament to how instrumental Peloton has been in helping me understand myself, and how powerful the relationships formulated can be.

If I reflect back, I realize how much started for me on the basketball court. Not only did it help me develop a close relationship with my father, but it also really helped me learn skills that I preach in my Peloton classes—like discipline, hard work, and the importance of being a part of a team. It also taught me how meaningful it is to connect with people through sweat. There’s a chemical reaction going on in your body, and you’re experiencing pain and happiness and joy and laughter all at the same time. And when you go through that together, as a community, there’s so much more to it.

As Told To: Zoe Weiner

Oh hi! You look like someone who loves free workouts, discounts for cult-fave wellness brands, and exclusive Well+Good content. Sign up for Well+, our online community of wellness insiders, and unlock your rewards instantly.

High-speed internet access is a new social determinant of health

Heart attack: Persistent sweating despite no exertion could be a symptom