Victorian premier Daniel Andrews has insisted his government’s response to the Covid pandemic was a ‘triumph’ despite forcing millions in Melbourne to endure the world’s longest lockdown.

Speaking to left-wing podcast Socially Democratic last week, Mr Andrews said his political opponents and Victorian federal MPs should have been congratulating him for successfully keeping the virus at bay.

Melbourne has struggled with Covid more than any other Australian state or territory, spending a cumulative total of more than 260 days under stifling restrictions.

Division within the city has steadily increased, with weekly protests – some attended by tens of thousands – over lockdown rules, vaccine mandates, and most recently the Andrews’ Pandemic Management Bill.

‘It’s a triumph in terms of what government in partnership with the community can do,’ Mr Andrews told podcast host Stephen Donnelly, a former Labor campaign official. 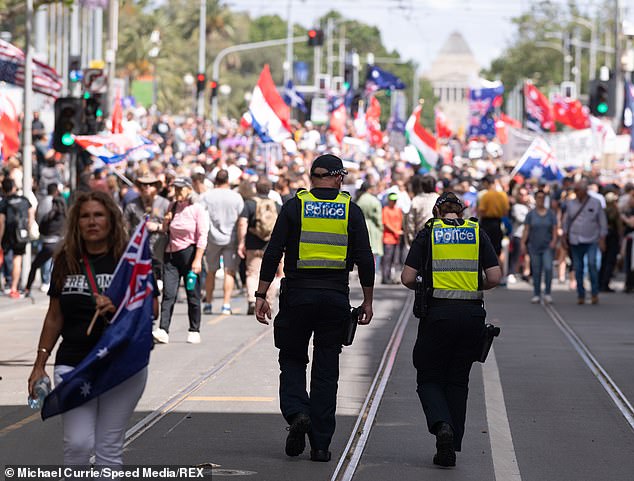 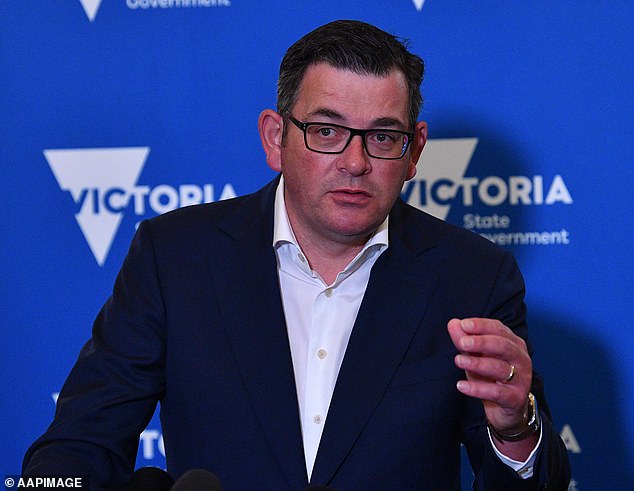 Mr Andrews also made mention of his daily press conferences, saying he ‘wasn’t sure what people would think of him’.

‘They gave me some audience numbers at one point, which is, you know, wonderfully helpful, to know that you’re you know, talking to a million people, live,’ he said.

He said those protesting had ‘understandable’ anger but took aim at federal MPs for attending the rallies and stirring up crowds.

‘We’ve seen some people who were very critical of us standing and sharing a stage, the other side of politics sharing a stage with these people. What is it they want? Do they actually want someone to get hurt?’

Mr Andrews also admitted that mistakes were made by the Victorian government during the peak of the Covid outbreak.

‘I wouldn’t want anyone to think that we regard our pandemic response across the board as having been perfect – of course it wasn’t. There are things that if you could go back and change them, you would,’ he said.

The admission didn’t prompt a follow up question from Mr Donnelly – who was an assistant secretary for the Labor party during the last two elections. 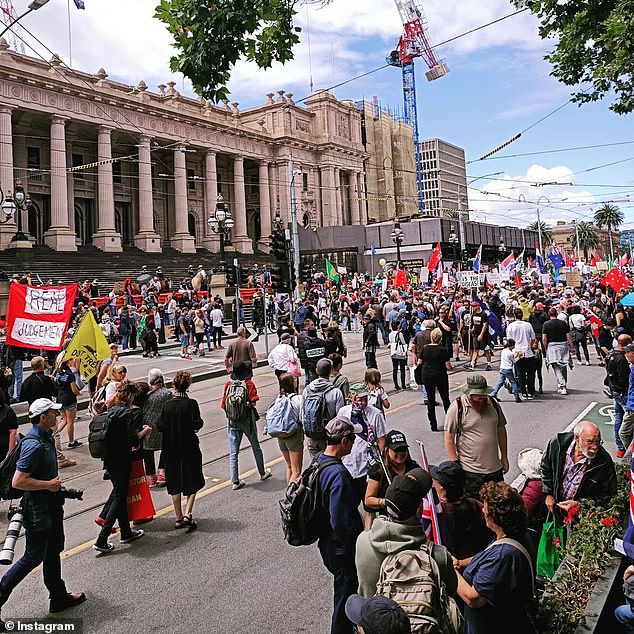 Up to 10,000 people were estimated to be at Saturday’s protests which marched passed Parliament House (pictured)

The Andrews government has been widely criticised over a number of issues during the Covid crises.

The government’s leaky hotel quarantine scheme was partly responsible for Victoria’s ‘second wave’ with then-health minister Jenny Mikakos who had oversight on the system later resigning following an inquiry.

The state also didn’t move to a single, consistent QR check-in system until well into 2021.

And the government and police response to protests – which involved lines of officers in riot gear deploying pepper spray and rubber bullets – was labelled ‘heavy-handed’ by Australia’s former deputy chief medical officer. 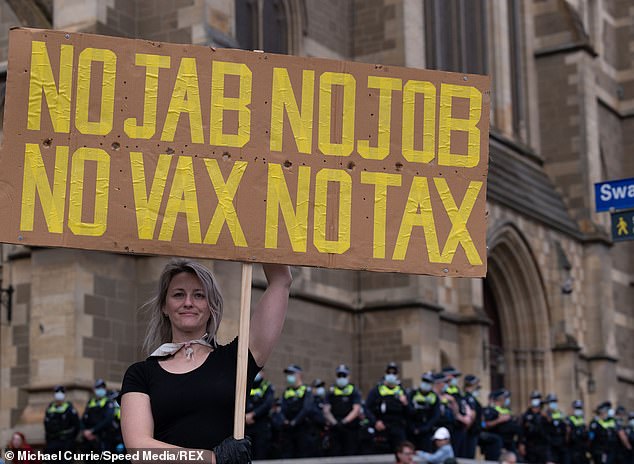 On Saturday, up to 10,000 people protested in Melbourne’s CBD, in the first mass demonstration since the Victorian government passed pandemic laws.

Craig Kelly addressed the crowd and said he was unable to hire a rental car after landing at Melbourne airport because he refused to show his COVID-19 vaccine certificate.

‘I am no longer in a great city, I am here in a fascist medical state,’ the NSW-based MP shouted.

The anti-mandate mob moved to the front of Flinders Street Station, bringing traffic to a standstill at the major intersection.

After more than an hour, some protesters headed for the ABC’s Southbank studios as police formed a line in front of the building, and asked to speak with the public broadcaster’s chair Ita Buttrose, who lives in Sydney.

They then set up outside Government House, the official residence of the state’s governor who will sign off on the pandemic bill.

At the peak of the rally, Victoria Police estimated 8000 to 10,000 people were in attendance.

‘There was a significant police presence throughout the city and no arrests were made as of 5pm,’ a spokesman said.

In nearby Carlton, a counter-rally against far-right elements of the so-called ‘freedom protests’ was also held.

It will replace the existing state of emergency on December 16 and makes Victoria the first state in Australia with pandemic-specific laws. 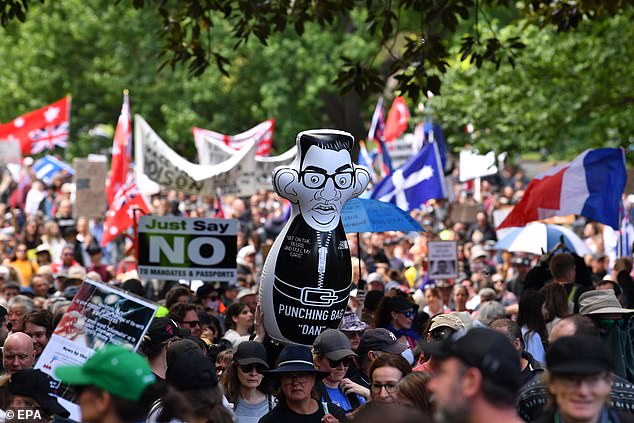 Health Minister Martin Foley suggested demonstrators are complaining about aspects of the pandemic laws that had already been altered.

‘Protests should be peaceful and they should be based on up-to-date information and facts,’ he told reporters on Saturday.

‘What we now have is a set of legislative arrangements that allow a balance between the public health response that keeps us safe and open.’

There are currently 39 COVID-19 cases linked to mass protests in Melbourne last month, with three people hospitalised and one in intensive care.

Fourteen of the largely unvaccinated cases went to the rallies while infectious.

Victoria recorded another 1365 infections, all bar two of which were locally acquired, and a further nine virus-related deaths over its latest reporting period.

‘I’d be encouraging (Premier) Daniel Andrews to seriously consider that,’ he said.

Mr Andrews has previously indicated restrictions on unvaccinated people in Victoria could change depending on the progress of booster shots and rollout of jabs to children aged between five and 11.

Lotion vs. Cream—2 Docs Share When to Use Which

Bella Hadid’s Classic Summer Manicure Is So Easy to…

How to keep youth athletes safe in the heat

Kim Kardashian Breaks the Internet With Pics In Metallic…