Convalescent Plasma For COVID-19 Turns Out To Be A Bust : Shots

Melissa Cruz elevated her arm after donating COVID-19 convalescent plasma in April 2020, as phlebotomist Jenee Wilson shut down the collection equipment at Bloodworks Northwest in Seattle. 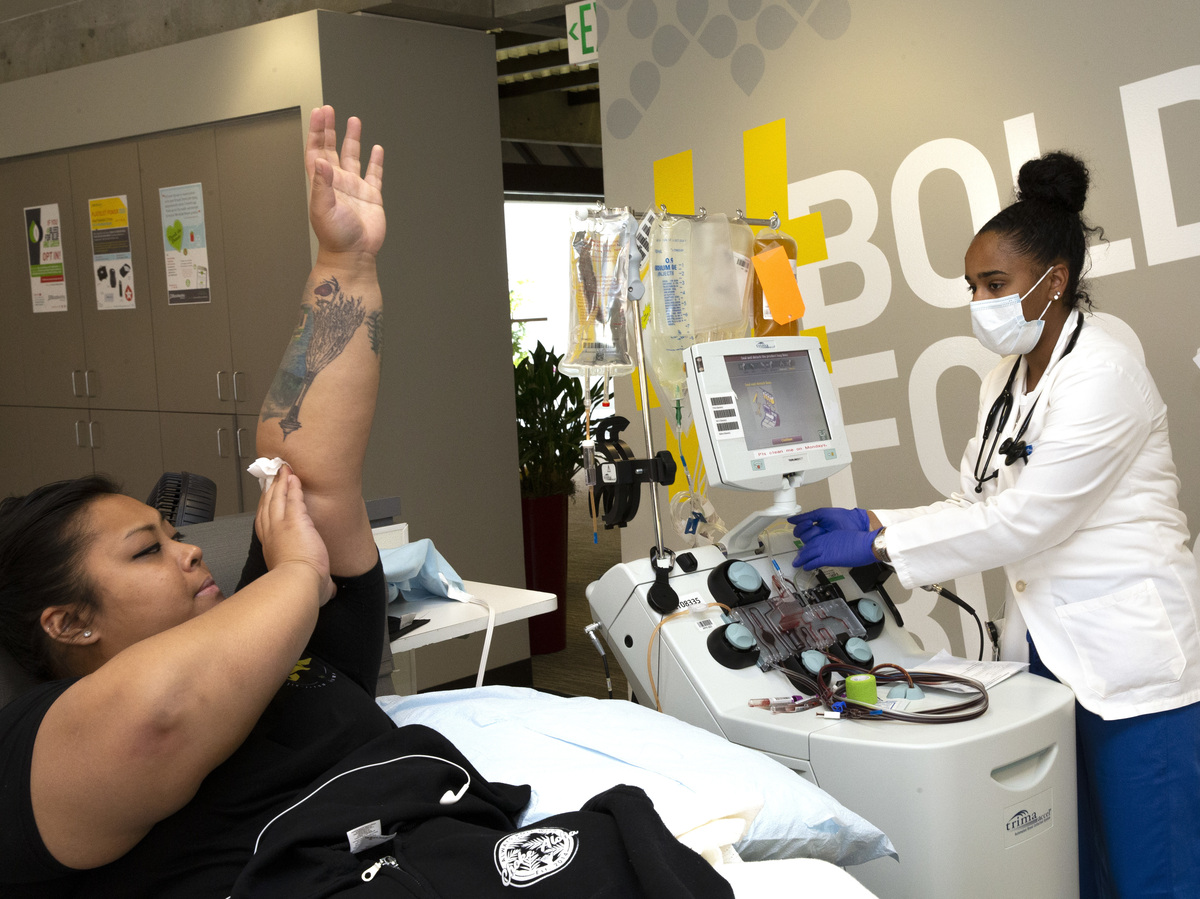 Melissa Cruz elevated her arm after donating COVID-19 convalescent plasma in April 2020, as phlebotomist Jenee Wilson shut down the collection equipment at Bloodworks Northwest in Seattle.

More than half a million Americans have received an experimental treatment for COVID-19 called convalescent plasma. But a year into the pandemic, it’s not clear who, if anyone, benefits from it.

That uncertainty highlights the challenges scientists have faced in their attempts to evaluate COVID-19 drugs.

On paper, treatment with convalescent plasma makes good sense. The idea is to take blood plasma from people who have recovered from COVID-19 and infuse it into patients with active infections. The antibodies in the donated plasma, in theory, would help fight the virus.

Based on that idea, last March Dr. Nicole Bouvier at the Icahn School of Medicine at Mount Sinai Hospital in New York decided to give it a try.

She recalls thinking, “we have this new disease that didn’t have any known therapies, and convalescent plasma has been used in new epidemic and pandemic diseases,” as recently as in an Ebola outbreak in West Africa a few years ago.

She says she was the first doctor to get special permission from the Food and Drug Administration to use it as an experimental treatment.

It was a huge commitment to line up people willing to donate plasma as well as to treat patients themselves, “so it was a big production,” she says. “We ultimately screened over 70,000 people” and identified around 20,000 who had high antibody levels in their blood plasma.

Mount Sinai treated more than 1,400 patients, including throughout the height of New York City’s nightmarish COVID-19 outbreak last spring. But all the while Bouvier had no idea whether the plasma really worked.

Finally, a couple of weeks ago, she had seen enough data from carefully controlled studies — and decided to stop offering the treatment.

“The straw that broke the camel’s back was two very large cohort trials,” she says. The RECOVERY Trial in the United Kingdom had studied more than 10,000 volunteers and found no benefit. Another one called CONCOR-1, run by Canadians, had studied nearly 1,000 patients. It, too, stopped recruiting new patients because doing so would have been futile.

But those studies focused on people sick enough to be in the hospital. Dr. Arturo Casadevall at the Johns Hopkins Bloomberg School of Public Health is one of the prime advocates for convalescent plasma. He says he thinks the treatment needs to be done sooner, in the outpatient setting.

“From the very beginning here at Hopkins we set out to do outpatient trials,” he says. “The trials were set up in March [of 2020], however it took many months to get the money to do it.” With taxpayer money nowhere to be found, the study ultimately went forward with funding from the billionaire Michael Bloomberg, Casadevall says.

A year later, the study at Hopkins still doesn’t have results. And it’s not just a question of funding. The entire U.S. medical research system isn’t set up to do what’s needed to identify new treatments during a pandemic.

Dr. Derek Angus, chair of critical care medicine at the University of Pittsburgh, says in a public health emergency scientists should be able to evaluate new treatments at hundreds of hospitals, in a matter of months.

“People might roll their eyes and say that’s impossible, but that’s largely what the United Kingdom has done,” Angus says. “For all our capacity in the United States, it’s depressing that we can’t do a U.S. version.”

The U.K. was able to launch its vast study quickly because Britain has a national health system that not only provides treatment but can conduct research. Research in the U.S. is balkanized among universities, drug companies and funders.

“We pride ourselves on having a very federated, independent system,” Angus says, “But, gosh, that is very hard to turn on a time to solve national problems.”

To give just one example, a national network of emergency-room physicians got federal funding to treat people with convalescent plasma, in a study named C3PO. Their patients were sick enough to show up in the emergency room, but well enough to go home afterwards.

“We should have been able to get this done as quickly as they did in the U.K.” says Dr. Kevin Schulman at Stanford University. “It was just a much slower process to set up.”

Schulman at Stanford was responsible for some of the logistics. And they were a nightmare, he says.

“I said tongue in cheek at some point when we had five patients in our study that we had at least 500 people touch a paper for the five patients we had recruited. And that’s the opposite in the UK.”

“Some of the contracts for the trial we are still negotiating even today,” he adds. “You know, the U.K. didn’t have any of that.”

The C3PO study recently stopped recruiting patients. It had enrolled about 500 out of a planned 900, but an independent monitoring board concluded that continuing would have been futile.

This further casts doubt on the value of convalescent plasma.

“I don’t see any point in offering plasma outside a clinical trial,” Angus at Pitt says.

Several trials are still ongoing. And there’s still a chance that some of them could identify a group of patients, treated at a particular time with a particular concentration of plasma, who would benefit. So Bouvier at Moun Sinai hasn’t given up on it completely.

In retrospect, it’s understandable why convalescent plasma doesn’t help people hospitalized with significant illness, she says. Serious illness is caused primarily by the body’s reaction. Respiratory viruses like these don’t persist for long. “They’re sort of like, ‘wham, bam, thank you, ma’am’ And then they’re gone,” she says.

“If a study comes along comes along that identifies a population in whom convalescent plasma is useful, we will use it in that population” she says.

And if it does appear to be helpful for people who are early in the course of disease, that raises another question: Would plasma be better than the monoclonal antibody drugs already authorized by the Food and Drug Administration for that purpose and easier to use?

Casadevall at Hopkins argues plasma might be better, especially if new virus variants can evade the antibody drugs. Antibodies in the plasma of people who have recovered have apparently been successful in controlling whatever virus they encountered, so the treatment actually evolves along with the pandemic.

But to figure out whether convalescent plasma is better than monoclonal antibodies could require another large, time-consuming study in a research system not set up to be nimble.

Six Health Hazards of the Addiction

Roadshows for Visit Abu Dhabi in India Highlight the…

Pharma-Funded FDA Gets Drugs Out Faster, But Some Work Only…