Why you should never do push ups from knees 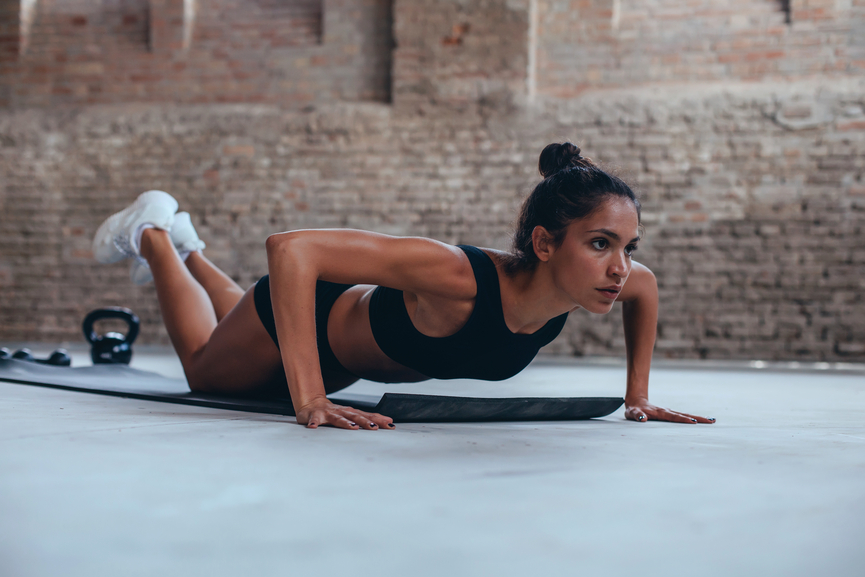 0
Share
If you can’t do a full push-up, the easy fix is to drop to your knees. It still gives your arms, chest, and shoulders a thorough workout, while removing some bodyweight to make things ever-so-slightly easier. While this is fine when you’re in a pinch (aka the middle of a grueling fitness class), according to pros, it’s not a great way to build up to a full-body push-up.

“I never recommend doing push-ups from the knees. In fact, I believe it’s doing you more harm than good,” says trainer Charlee Atkins, founder of Le Sweat TV. When you’re doing the move from your knees, it’s easy to get sort of stuck in that pattern, because it isn’t helping you strengthen the areas you need to in order to progress. “A push-up is not only an upper-body exercise, it’s a total-body exercise.  In order to do a push-up, you have to have enough arm strength to get your body up off the ground, and you also need to have enough core strength to support the lower back and hips. Hip stability is dependent on core and glutes strength. If you don’t have all of those pieces of the body working together, you are at risk of injuring your shoulders and your lower back,” says Atkins. Doing push-ups from your knees prevents you from doing that.

“Nailing the basics and building a solid foundation is always a priority for long-term form,” says Kollins Ezekh, ACE-CPT. “Going on your knees is a good alternative to do on the spot as a quick modification in a class setting, but if you are looking to work toward achieving a standard push-up, I suggest working on progression with incline push-ups.”

There are instead a few simple steps you can take to reach your goal of doing them in full form. First, Atkins says you’ll want to master the art of holding a plank on both your forearms and your hands. Then, you’ll need to train your body to handle its own weight to be able to move from that position. “Instead of dropping to the knees, bring the ground closer to you by elevating your hands on a bench, chair, a counter, or the wall, keeping the knees off the ground and body in a straight line,” says Atkins. “Then, train your body to lower closer to the new surface.” Once you’re able to successfully do 10 to 12 push-ups on the wall, then move to the counter; when you’ve got that down, move to a couch or coffee table; and when that’s mastered, you’ll be ready to hit the floor in full push-up form.

Once you’ve made it that far, be sure to follow along with the video below, and you’ll have a perfect, full-blown pushup in no time at all.

Biden Shifts Vaccination Strategy in Drive to Reopen by July 4