Want to live longer? Drink up to three cups of coffee each day

Drinking up to three cups of coffee every day could help you live longer, a decade-long study suggests.

Regular drinkers of the hot beverage were up to 12 per cent less likely to die.

And they were up to a fifth less likely to get cardiovascular disease or suffer a stroke, results showed.

But experts found the health benefits only come from consuming ground coffee — not instant varieties.

And drinking more than three cups a day doesn’t have any good effects, according to the research of almost 500,000 people. 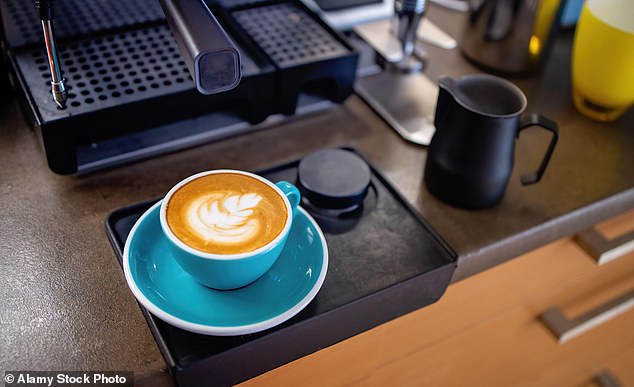 Coffee is one of the most consumed drinks in the world but previous studies have been contradictory on whether it could benefit or harm health. As well as caffeine, the drink also contains minerals and antioxidants. Some studies have linked it with reducing the risk of cancer, obesity, type 2 diabetes and dementia. However, other studies have pointed to an increased risk of having high blood pressure and dying from cardiovascular disease 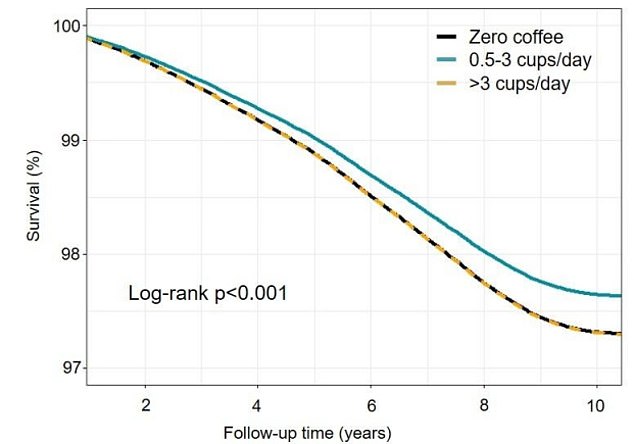 The graph shows the risk of dying from all causes depending on whether study participants drank no coffee (black line), half a cup to three cups per day (blue line) or more than three cups a day (black line). The researchers found that those who drank between 0.5 and three cups per day were 12 per cent less likely to die than non-coffee drinkers by the end of the 11-year study

Coffee is one of the most consumed drinks in the world, although previous studies have been contradictory on whether it could benefit or harm health.

As well as caffeine, the drink also contains minerals and antioxidants. Some studies have linked it with reducing the risk of cancer, type 2 diabetes and dementia.

However, others have pointed to an increased risk of having high blood pressure and dying from cardiovascular disease.

HOW MUCH COFFEE SHOULD I DRINK?

The NHS says it is fine to drink coffee as part of a balanced diet.

Besides caffeine, the drink contains many minerals and antioxidants.

Some studies have found it can reduce the risk of cancer, obesity, type 2 diabetes and dementia.

However, other studies have found it can increase the risk of suffering from high blood pressure.

It advises switching to other non-caffeinated drinks.

The new study, from a team of British and Hungarian academics, suggests the drink does not increase blood pressure and has cardiovascular benefits.

Dr Steffen Petersen, one of the authors from Queen Mary University of London, said the results show moderate coffee consumption ‘is not cardiovascularly harmful and may even be beneficial’.

‘To the best of our knowledge, this is the largest volume of research to date focusing on the cardiovascular effects of coffee consumption,’ he added.

Participants were taken from the UK Biobank, were aged 56 on average, and didn’t have heart disease when the study began.

Volunteers were followed for 11 years, allowing experts to analyse differences between groups.

Among the participants, 22 per cent were non-coffee drinkers and 58 per cent drank between up to three cups a day.

The others confessed to having at least three cups, according to the study published in the European Journal of Preventive Cardiology.

Results showed those who drank between 0.5-3 cups per day were 12 per cent less likely to die than non-coffee drinkers by the end of the study.

Those who drank more than three cups a day were no more likely to have high blood pressure — a concern from previous studies.

But they had similar rates of mortality, cardiovascular disease and stroke to non-coffee drinkers, suggesting three cups a day was the maximum people can consume to gain health benefits.

The researchers did not detect any increase in high blood pressure rates among those who drank coffee daily, quelling concerns that the caffeinated drink triggers the condition.

However, when the group looked at health benefits based on the type of coffee participants drank, those who consumed instant coffee — around a quarter of the group — did not have any health benefits.

The researchers said this was likely down to differences in how the coffee is made.

Instant coffee contains more caffeine and antioxidants, but has twice as much acrylamide — a substance found in some foods that has been linked with increased risk of cancer and nervous system damage.

The team said coffee’s ‘favourable affect’ could be explained by changes in the heart structure among those who consumed the caffeinated drink.

They examined cardiovascular MRI scans, available for 30,000 participants, and saw signs that those who drank coffee had healthier hearts.

Those who consumed a moderate or high amount of the caffeinated drink had larger ventricles, meaning they could pump out more blood.

How to sleep: The drink that could boost sleep time ‘by an average of 85 minutes’ – study

Mint leaves reduce Uric acid and its other benefits

Lisa Marie was ‘back on opioids’ before awards…

WHO: COVID may be nearing ‘inflexion point’