A health care worker from the Medical University of South Carolina administers a coronavirus test this month in Charleston, S.C. U.S. health authorities said Thursday that the first U.S. cases of the variant that emerged from South Africa were detected in South Carolina. 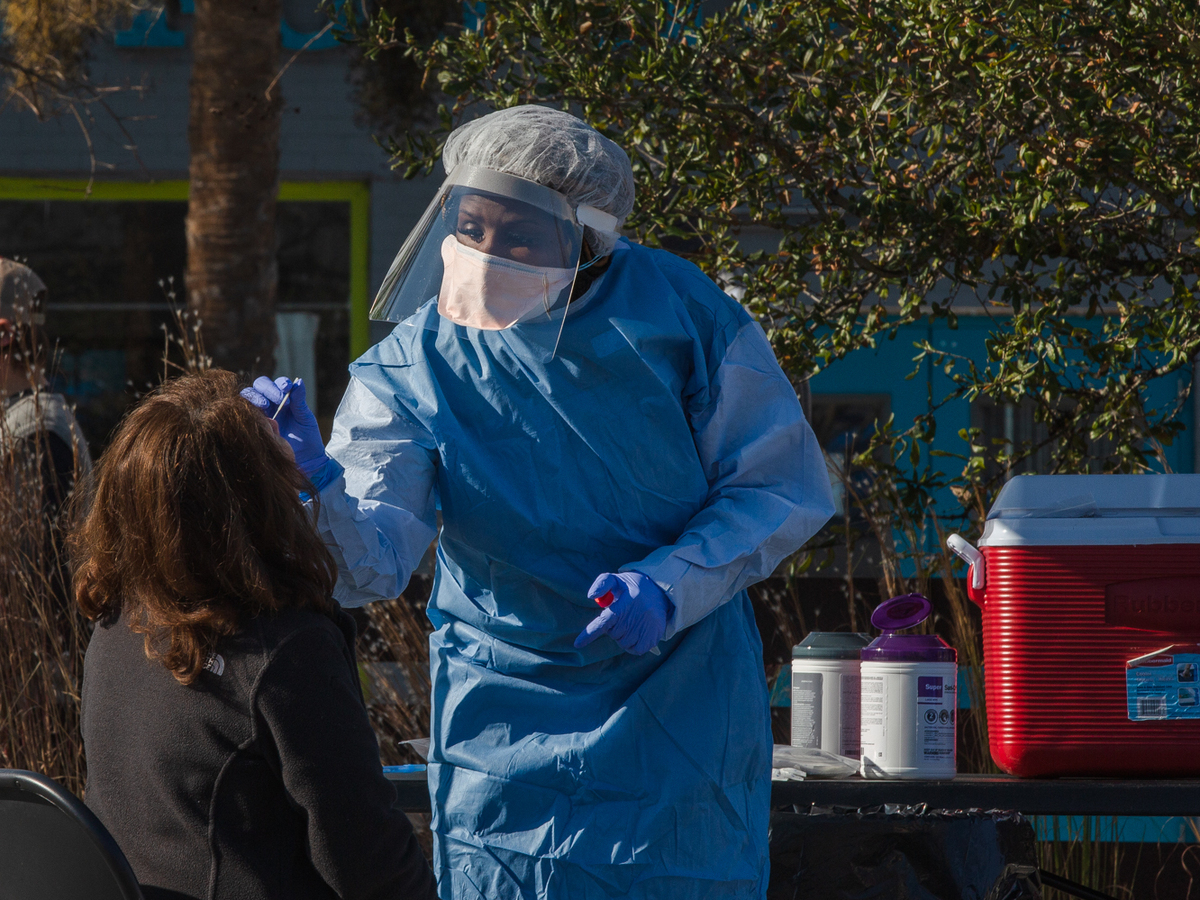 A health care worker from the Medical University of South Carolina administers a coronavirus test this month in Charleston, S.C. U.S. health authorities said Thursday that the first U.S. cases of the variant that emerged from South Africa were detected in South Carolina.

Health officials have identified the first U.S. cases of the coronavirus variant that was initially detected in South Africa. The Centers for Disease Control and Prevention says the variant, known as B 1.351, has been found in South Carolina.

“CDC is early in its efforts to understand this variant and will continue to provide updates as we learn more,” the agency said. “At this time, we have no evidence that infections by this variant cause more severe disease. Like the U.K. and Brazilian variants, preliminary data suggests this variant may spread more easily and quickly than other variants.”

The two cases in South Carolina involve adults in the eastern part of the state, from the Lowcountry and Pee Dee regions, according to the state’s Department of Health and Environmental Control. It did not provide more details about the patients, citing privacy concerns.

“At this point in time, there is no known travel history and no connection between these two cases,” the agency said.

Dr. Brannon Traxler, the department’s interim public health director, said that the variant’s arrival is an important reminder that the fight against COVID-19 is far from over.

Noting the limited supply of vaccines, she added, “Every one of us must recommit to the fight by recognizing that we are all on the front lines now. We are all in this together.”

The coronavirus variants have alarmed public health experts in recent months, posing a new challenge even as vaccines from Moderna and Pfizer-BioNTech have raised hopes in the fight against the COVID-19 pandemic.

The strain of SARS-CoV-2 first detected in South Africa has now been found in at least 20 other countries. Discussing the variants in a briefing Wednesday, White House officials noted that in cases involving the strain, early studies suggest “neutralization by vaccine-induced antibodies may be moderately diminished.”

Noting those findings, Dr. Anthony Fauci said, “However, it still is well within the cushion of protection. So you could diminish the vaccine-induced antibody efficacy by a few-fold and still be well within the protective range of the vaccine. And that’s the reason why you’ve seen announcements that the vaccines we’re using are still effective.”

Earlier this week, Moderna said its COVID-19 vaccine offers protection against new variants of the coronavirus — but that the vaccine is more effective against the strain first identified in the U.K. than the one found in South Africa.

The company said that when its vaccine was used against the variant from South Africa, the vaccine produced levels of virus-fighting antibody titers that were around six times less than when it’s used against other variants.

As a result, Moderna said it will test booster doses of its vaccine, including one that would be tailored to fight strains that have recently emerged.

Both of the variants found in the U.K. and South Africa have mutations that set them apart from the original SARS-CoV-2. But the one first seen in South Africa has more mutations in its spike protein than the one from the United Kingdom. Several of its mutations are also present in a variant that was first identified in Brazil.

Researchers have found growing evidence that both of the variants circulating in South Africa and Brazil may be capable of evading the body’s immune system, heightening the risk of reinfection, as NPR’s Michaeleen Doucleff recently reported.

The first U.S. case of the strain from Brazil was identified earlier this week in the Minneapolis metro area.

A main concern now, Fauci said on Wednesday, is to look at how the coronavirus might continue to change and evolve.

Nutrition Drinks Including Varieties of Oatly and Glucerna…

Thanks to Megan Thee Stallion, I Know What My Halloween…

The TikTok Health at Every Size Influencers Inspiring Me