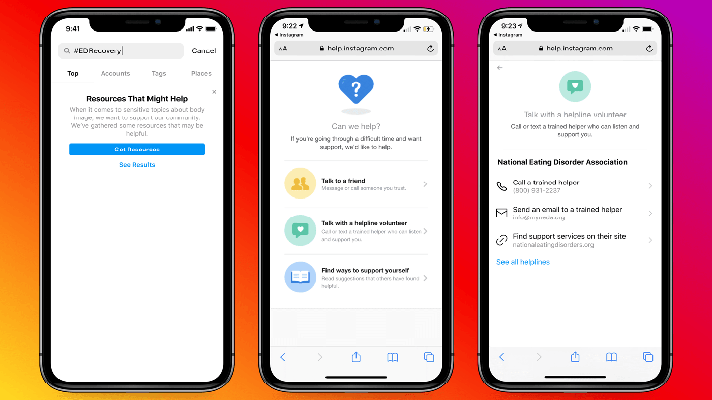 Yesterday TikTok, Instagram and Pinterest each announced collaborations with the National Eating Disorders Association (NEDA) that are focused on highlighting body positivity and surfacing eating disorder support services to their users.

Timed with the start of National Eating Disorders Awareness Week, all three social media networks described new systems in which users who either search for or share content related to eating disorders and body image will be presented with supportive resources.

These range from written tips and suggestions developed in tandem with NEDA to direct contact with national and local eating disorder support hotlines. Other support additions highlighted by the networks were tied to their specific platforms.

TikTok, for instance, said that it would be featuring relevant content on its Discover page and add permanent NEDA-developed public service announcements for specific hashtags.

Instagram said it would be hosting NEDA programming in its Reels section, hosting internal feedback session with leaders in the space to get ahead of emerging issues, and in the coming weeks will give users the ability to directly message friends from the support resources.

Finally, Pinterest said it would include an educational feature on its Today Tab, drive awareness through Story Pins, and donate ad credits to increase awareness among users of different events and discussion roundtables taking place during the awareness week.

Social media on the whole has been highlighted as a contributor to negative body image, with studies describing damaging associations or critical content among both female and male users. Providers have also written about the impact these networks have had on their patients’ mental wellness and self-image.

“Previously, patients would bring images of celebrities to their consultations to emulate their attractive features,” a group of plastic surgeons wrote in a late-2018 JAMA viewpoint.

“A new phenomenon, dubbed ‘Snapchat dysmorphia,’ has patients seeking out cosmetic surgery to look like filtered versions of themselves instead, with fuller lips, bigger eyes, or a thinner nose. This is an alarming trend, because those filtered selfies often present an unattainable look and are blurring the line of reality and fantasy for these patients.”

Body image, personal identity and exposure can all play a role in sparking an eating disorder, according to NEDA, and can lead to long-term health consequences across several of the body’s organs and systems, or potentially death.

These and other social media networks have rolled out a number of public awareness and redirection campaigns over the years focused on physical and behavioral health. These have included systems that surface substance misuse resources, offer stress and anxiety exercises, or scan posts for signs of suicide ideation (although this last area has seen some criticism in regard to ethics and transparency).

Most recently, the focus of many social media networks and their pundits has been squarely on these companies’ roles in limiting the spread of misinformation.

For healthcare, the issue has been in the spotlight for a handful of years – particularly in regard to broader anti-vaccination movements – but peaked last year with COVID-19. As a result, Facebook, Google and others in the online tech realm have detailed their efforts to cut down on the spread of bad information.

How to Use Food to Fight Depression and Boost Mood