“Pfizer is not having any production issues with our COVID-19 vaccine,” CEO Albert Bourla says. But Human Services Secretary Alex Azar says the company has had problems. Many states say their allocations for next week have been cut, without an explanation. 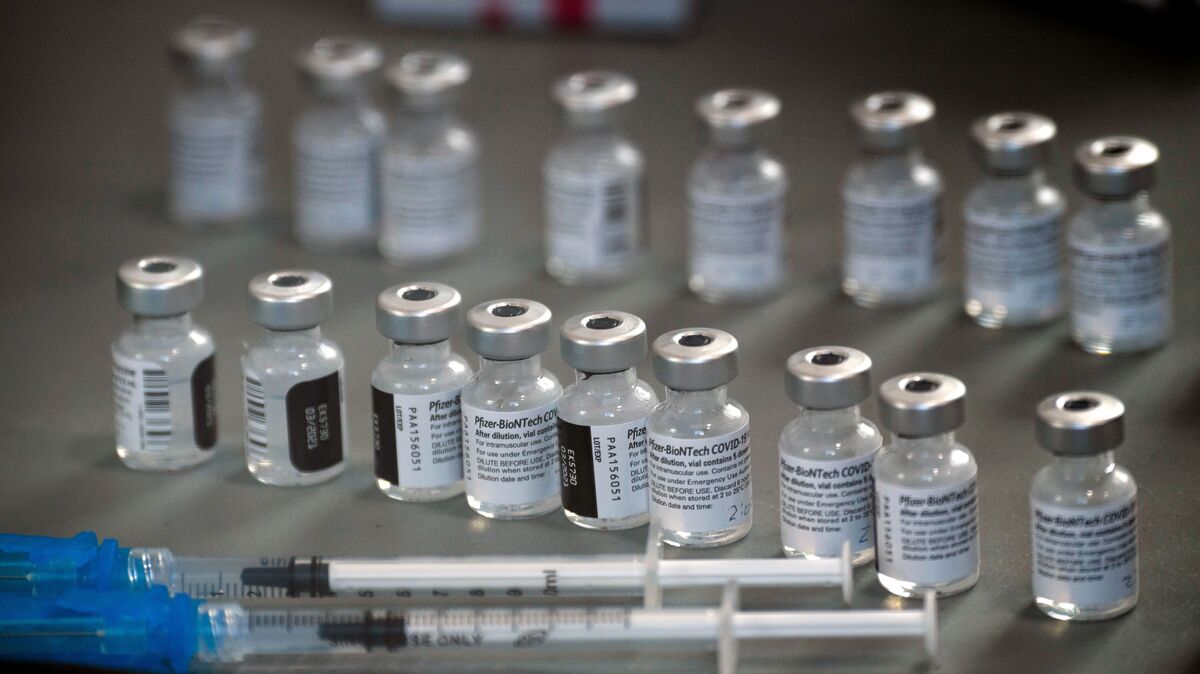 “Pfizer is not having any production issues with our COVID-19 vaccine,” CEO Albert Bourla says. But Human Services Secretary Alex Azar says the company has had problems. Many states say their allocations for next week have been cut, without an explanation.

Pfizer is pushing back on the Trump administration’s suggestion that the company is having trouble producing its COVID-19 vaccine, saying it’s ready to ship millions more doses – once the government asks for them. As the company spoke out, several states said their vaccine allocations for next week have been sharply reduced.

Here’s what the key players are saying about a complicated situation:

“Pfizer is not having any production issues with our COVID-19 vaccine, and no shipments containing the vaccine are on hold or delayed,” CEO Albert Bourla said via Twitter. His company says it has completed every shipment the U.S. government has requested.

“We have millions more doses sitting in our warehouse but, as of now, we have not received any shipment instructions for additional doses,” Pfizer said in a statement.

The company also noted that in the past week, it shipped 2.9 million doses of the vaccine it developed with BioNTech, in what is widely seen as a breakthrough in the nation’s fight against the coronavirus.

The drug maker said it was responding to what it called “public comments” about its production process, after Health and Human Services Secretary Alex Azar said the pharmaceutical giant faced “production challenges” and was uncertain about delivery dates.

Pfizer stated, “We remain confident in our ability to deliver up to 50 million doses globally this year and up to 1.3 billion next year, and we look forward to continuing to work with the U.S. Government to deliver our vaccine to the American people.”

What the states say

Washington Gov. Jay Inslee says the Centers for Disease Control and Prevention has told his state that its vaccine allocation “will be cut by 40 percent next week — and that all states are seeing similar cuts.” The federal government did not give an explanation, he said.

“This is disruptive and frustrating,” Inslee added. “We need accurate, predictable numbers to plan and ensure on-the-ground success.”

The Iowa Department of Public Health said its “initial allotment of coronavirus vaccines could drop by 30 percent,” Iowa Public Radio reported, adding, “but the federal Department of Health and Human Services put out a statement saying otherwise.”

In Idaho, the Department of Health and Welfare said, “Idaho, with many other states, has received word that our allotment of the Pfizer vaccine for next week has been reduced from 17,550 to 9,750 doses. We don’t know why it was reduced. But our focus doesn’t change – healthcare workers will continue to receive the vaccine.”

Florida Gov. Ron DeSantis said on Wednesday that while his state has been preparing to distribute the pending Moderna vaccine, “We have not been as sure about additional Pfizer vaccine for the rest of December.”

DeSantis added that an initial allotment had been sharply cut, citing production issues. After an initial warning that Florida might not receive the vaccine at all next week, he said, the state’s planned shipment of 200,000 doses was later partially restored.

HHS officials have disagreed with claims that states’ allocations are being cut, issuing a statement that calls such reports “incorrect.”

What the U.S. government says

Azar spoke about supplies of Pfizer’s vaccine on Wednesday, responding to a reporter’s request for an update on negotiations to get more doses.

“The core issue … is Pfizer’s ability to manufacture by a date certain,” Azar said. “Now that they have identified some of their production challenges that they’ve got, we’ve been working with them on what assistance is appropriate for us to provide in order for us to secure additional doses.”

Saying that Operation Warp Speed is working to secure more doses, the secretary said of Pfizer, “You know, they’re right now producing at their maximum capacity to deliver on the 100 million that is in the first tranche of the contract with us.”

Azar also said that because of Pfizer’s unique contract with the government, his agency hasn’t had the same level of insight into its manufacturing process that HHS has with other vaccine makers. Pfizer says it has “continuously shared” information at weekly meetings. And it says of HHS and OWS, “They have visited our facilities, walked the production lines and been updated on our production planning as information has become available.”

Pfizer is not as closely associated with Operation Warp Speed as other vaccine makers such as Moderna, AstraZeneca and Johnson & Johnson. While those companies accepted government money to develop and test coronavirus vaccines, Pfizer financed its own process. All of the firms signed purchase contracts to produce and distribute vaccine – Pfizer’s 100 million doses are priced at $1.95 billion.

But experts say the Trump administration’s contracts with the drug makers leave the government in a weak bargaining position. And after Pfizer’s vaccine was the first to head toward emergency use, the government was also criticized when a Pfizer board member said the U.S. passed up multiple chances to secure more doses of the vaccine over the summer. Azar has said that account is inaccurate.

Despite Azar’s comments about Pfizer’s production process, he said the government is moving ahead with plans to distribute millions more doses of its vaccine – and with even more doses of the Moderna vaccine that is expected to be authorized soon.

Allocations for next week’s Pfizer doses were provided to states on December 14 – a week before they were due to arrive. State health officials say they need more reliable estimates in advance, so they can plan ahead.

“To be told that the only thing you can count on is your allocation from the week before – that is not planning,” says Claire Hannan, head of the Association of Immunization Managers.

State officials have said they expect to get shipments of the Moderna vaccine, if it’s authorized as expected, on or around Dec. 21.

Here’s What’s Behind Vaccine Hesitancy in the U.S.

Blood clots: ‘Quick’ exercises you can do at…

Have You Tried Your Hands On Pocket Pizza? Here’s The Recipe