The Culture Secretary, a close ally of the outgoing Prime Minister, used a round of media interviews to attack his decision to quit the government.

Mr Sunak’s decision to resign was second only to that of Sajid Javid among a slew of ministerial departures that eventually forced Mr Johnson to call time on his premiership.

Ms Dorries, who is now supporting his leadership rival Liz Truss, told BBC Radio 4’s Today programme: ‘I am bitterly disappointed that Boris Johnson was removed by a ruthless coup, as he was, led largely by Rishi Sunak.’

But she also played down reports that Mr Johnson is supporting a grassroots Tory effort to keep him in power.

Ms Dorries said he is not backing a campaign to alter party rules and get his name put on the ballot alongside Sunak and Truss.

Tory donor Lord Cruddas has claimed the PM told him he regrets agreeign to leave No10 and wants to stay.

But asked about the petition, she said: ‘The Prime Minister actually spoke to me about this a few days ago and he said, just in passing, ”if you hear anything about these people… tell them to stop, it’s not right”. They were his words, his exact words.’

She also dismissed a Daily Mirror report that she might consider giving up her relatively safe seat so Mr Johnson does not have to defend his more marginal Uxbridge and South Ruislip constituency. Ms Dorries, who is now supporting his leadership rival Liz Truss, told BBC Radio 4’s Today programme: ‘I am bitterly disappointed that Boris Johnson was removed by a ruthless coup, as he was, led largely by Rishi Sunak.’ 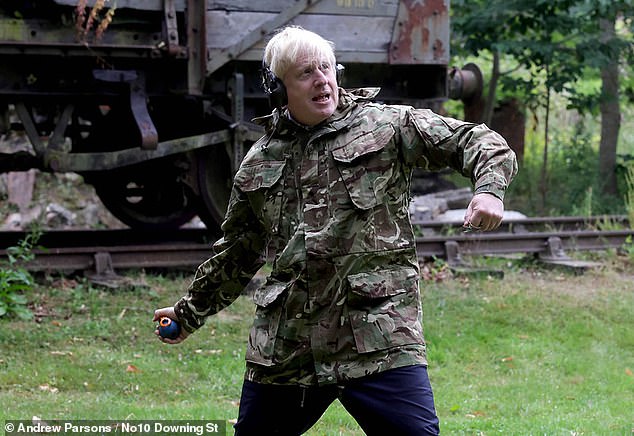 The Culture Secretary, a close ally of the outgoing Prime Minister, used a round of media interviews to attack the former chancellor’s decision to quit the government.

Reports suggested that Mr Johnson’s allies are worried his 7,000 vote majority might not be enough to hold the West London seat. Her Bedfordshire seat has a majority of more than 24,000, but Ms Dorries said the story was ‘100 per cent nuclear grade tosh’.

Some 10,000 people claiming to be Tory members backing a petition calling for him to be allowed to enter the current leadership election.

No10 has insisted that he intends to leave office in September but Lord Cruddas, the Tory donor behind the campaign has said the PM is having second thoughts.

Mr Johnson has personally yet to publicly comment on the claim, first made in the Telegraph.

However his former ally Steve Baker said he must quell any desire to reverse his departure.

Anew poll showed 70 per cent of all voters think he was right to quit – and even Tory voters are evenly split.

Ms Dorries defended her attack on Rishi Sunak’s expensive attire and said she had warned that a contest to replace Boris Johnson would ‘unleash the hounds of hell’.

Asked about her comments on Mr Sunak’s expensive suit and shoes, Ms Dorries said: ‘Judgment is a huge issue. We are facing a cost-of-living crisis.’

Leapfrog to hospitals: here’s how to reduce your diagnostic errors

A Lower Back Strength Workout to Relive Strain

Cardi B Says Having Her Butt Injections Removed Was…