A man who went on hunger strike for almost three days as he waited release from New Zealand‘s strict hotel quarantine was able to hug his father one last time before he died.

Kurt Lehndorf shared an emotional photo of his final embrace with his dad Des Lehndorf who died on Tuesday after a battle with cancer.

Kurt had been released from the country’s managed isolation and quarantine hotel on Monday to be with his ill father he hadn’t seen since July.

The Kiwi had flew into Auckland Airport from Australia on February 2 and following days of no answers to his requests to self-isolate at home to be with his father, Kurt went more than 60 hours without food or drink. 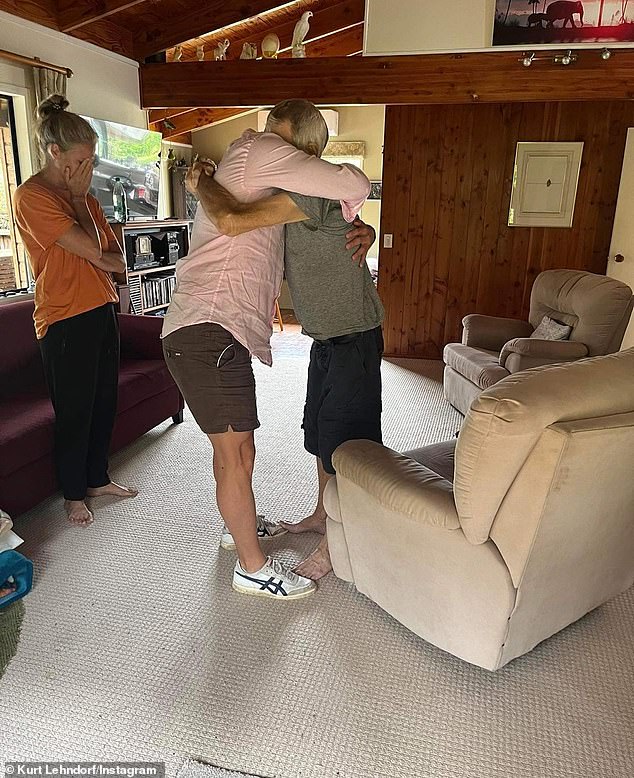 He was eventually released after a negative day three Covid test and after signing an agreement with the authorities to be provided with an exemption and self-isolate with his father at his home.

‘It means everything to be here with my family, we all need each other at this time, and dad needed me to be there for his last hours,’ Kurt told Stuff.

‘My faith in humanity has been well and truly restored. People have been leaving food at the gate, and we have been inundated with support.

Kurt had earlier been told by authorities he could visit his father while supervised but would then have to return to isolation. 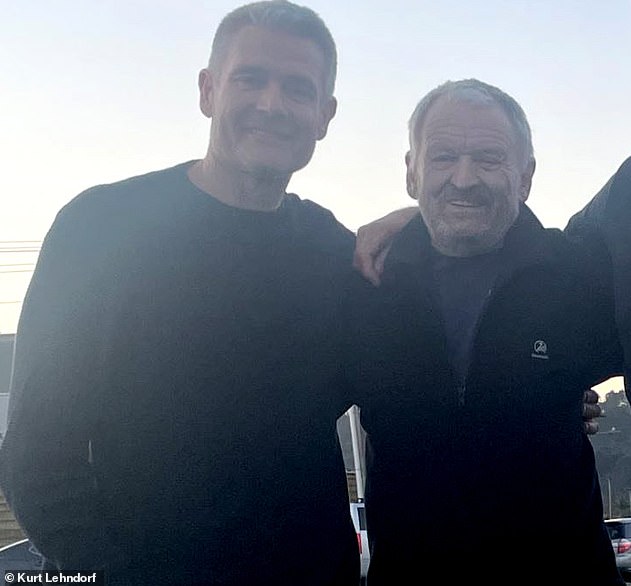 Kurt Lehndorf (left with his father) flew into Sudima Auckland Airport from Australia on February 2 to be with his dying father Des Lehndorf. He was able to be released from managed isolation to self-isolate at home with his family

He was then allowed to enter a family bubble with his relatives to farewell Des and isolate together.

Travellers are usually required to stay in an isolation hotel for a minimum of 10 days and cannot leave unless they provide a negative Covid test on day 8 or 9 and confirmation from a medic that they are at low risk of having or transmitting Covid.

However, applications for exceptional circumstances exemptions can be made under clause 14 of the Covid-19 Public Health Response (Isolation and Quarantine) Order 2020.

If the circumstances are deemed ‘exceptional’, the authorities can release travellers from isolation earlier but very few applications are approved. 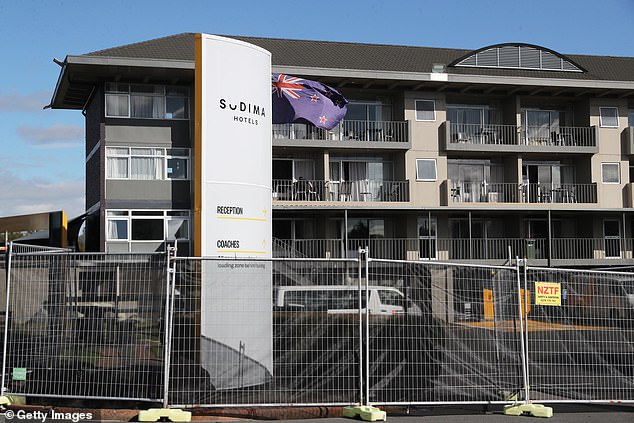 The Kiwi, who now lives in Australia, waited in New Zealand’s managed isolation and quarantine facility in Auckland 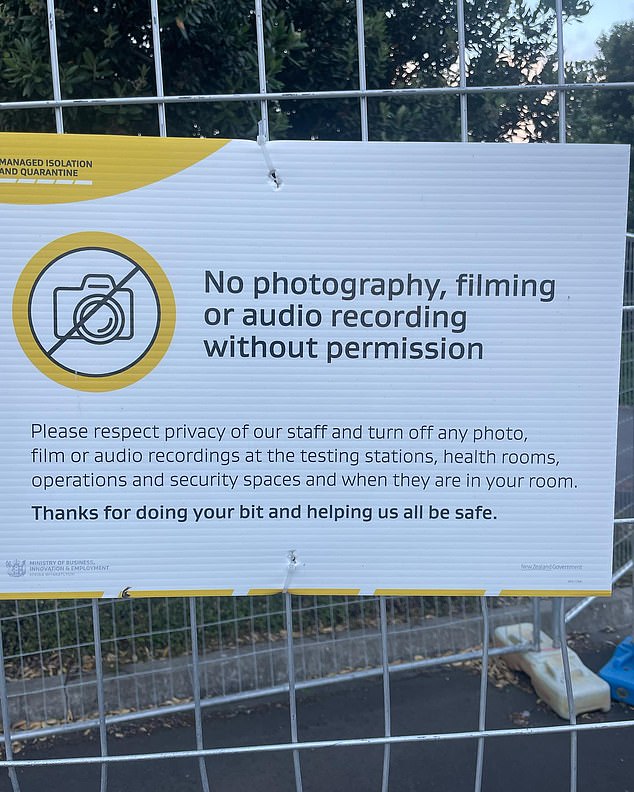 While in isolation Mr Lehndorf, who last saw his father in July, shared images from inside the facility

On Monday night the Ministry of Business, Immigration and Employment said that arrangements would be made for Kurt to see his father.

A spokesperson for the MBIE told 1News: ‘This morning Mr Lehndorf’s exemption from managed isolation application was approved, and he is now able to self-isolate in the community – we are pleased this means he will be able to spend time with his father at this difficult time.

‘A returnee is not eligible to be considered for exemption from managed isolation until they receive a negative day three Covid-19 test.

‘Supporting information is also required in relation to who else will be at the location of self-isolation and confirmation that they too will self-isolate.

‘Information confirming that others at the location will self-isolate was provided to MIQ by Mr Lehndorf early yesterday evening, Sunday 6 February.

‘Mr Lehndorf has been advised that his exemption application was approved this morning, subject to him receiving a negative Rapid Antigen Test prior to his departure from MIQ, and transport to his place of self-isolation is now being organised.’ 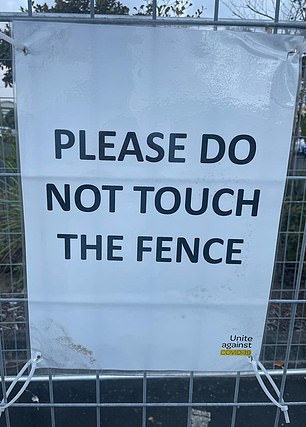 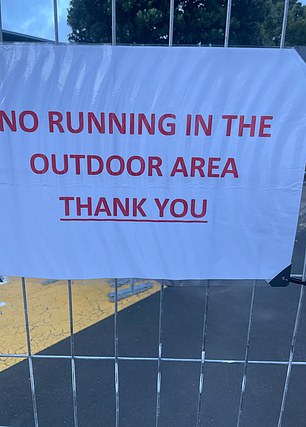 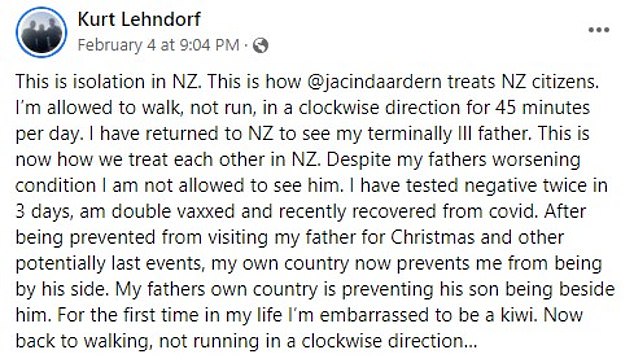 While waiting for the authorities to approve his exemption, Mr Lehndorf said: ‘I have tested negative twice in three days’

A timeline of Kurt Lehndorf’s managed isolation and quarantine saga

February 4 – Mr Lehndorf says he has tested negative twice in 3 days but is still unable to gain exemption to leave quarantine.

February  4 – The Kiwi enters a hunger strike in protest.

February 6 – By 8am on Sunday, Mr Lehndorf has gone past 61 hours of no eating or drinking and describes feeling dizzy with a headache

On the same day MIQ officials claim they are awaiting information from him but Mr Lehndorf says he has already provided them with all the paperwork.

February 7 – At 11.20am Mr Lehndorf says he has signed an agreement with the authorities and will be able to self-isolate with his father.

The Ministry of Business, Immigration and Employment confirms that the Kiwi will be able to go home to see his father.

Kurt received news of his father’s diagnosis shortly after the Delta outbreak hit and borders were slammed shut.

Last week he was able to fly into Sudima Auckland Airport from Australia where he was immediately placed into New Zealand’s managed isolation and quarantine hotel.

While in isolation he wrote on Facebook: ‘This is isolation in NZ. This is how @jacindaardern treats NZ citizens. I’m allowed to walk, not run, in a clockwise direction for 45 minutes per day.

‘I have returned to NZ to see my terminally Ill father. This is now how we treat each other in NZ. Despite my fathers worsening condition I am not allowed to see him.

‘I have tested negative twice in 3 days, am double vaxxed and recently recovered from Covid.

‘After being prevented from visiting my father for Christmas and other potentially last events, my own country now prevents me from being by his side.

‘My father’s own country is preventing his son being beside him. For the first time in my life I’m embarrassed to be a Kiwi. Now back to walking, not running in a clockwise direction.’

However he said he was told by the MIQ Isolation Exemptions Team that they needed more information in order to grant a temporary visit.

Earlier this week Kurt slammed officials after they claimed they were still waiting for him to supply them with all the required information.

It comes after New Zealand journalist Charlotte Bellis, who was forced to turn to the Taliban for help after she was stranded in Afghanistan by Jacinda Ardern’s draconian Covid border rules, was finally told she could return home.

Ms Bellis, 35, a journalist who worked in Qatar, had been stuck in Afghanistan since last year with Belgian partner Jim Huylebroek because it was the only place they had visas to live after she was turned away by the country of her birth.

She previously told how the Taliban offered to help after hearing of her plight, but added that she was still desperate to return to New Zealand because of the lack of medical care in Afghanistan.

After global outcry at her treatment, New Zealand’s deputy prime minister Grant Robertson said last week that she had now been granted a place in the country’s border quarantine system.

Wondering What To Pack For Honeymoon? Take Inspiration From Mouni Roy’s Wardrobe