Losing a Loved One Twice: First to Prison, Then to Covid 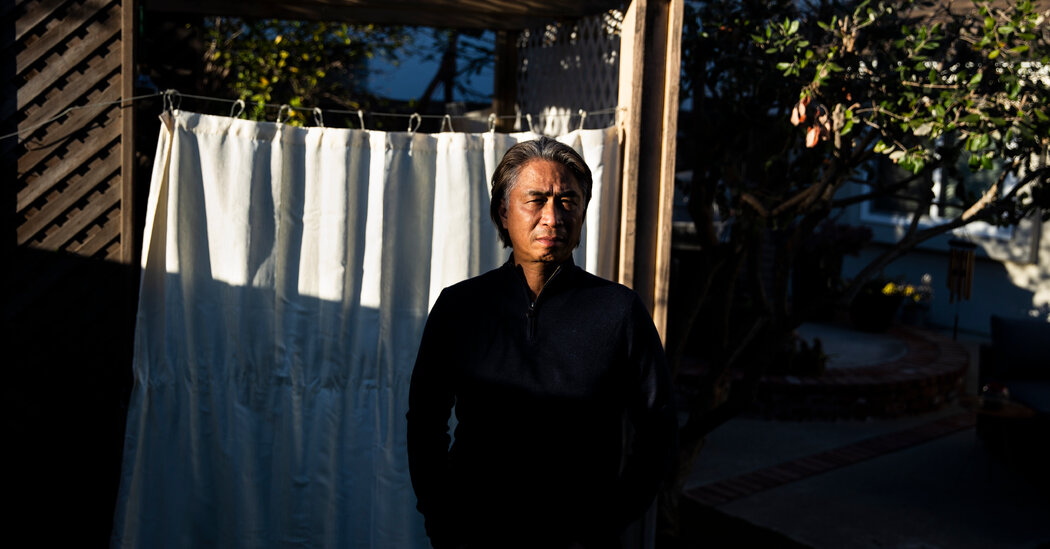 The calls usually came on Sundays.

Hank Warner of Huntington Beach, Calif., would see a familiar area code pop up on his phone, telling him that his younger brother was on the other end of the line.

He would pick up to hear a woman’s voice, asking if Mr. Warner would accept a collect call from San Quentin State Prison, in California. Then the brothers would have 15 minutes to talk about their lives and, if it was football season, the San Francisco 49ers.

When the calls stopped coming in June, Mr. Warner, 59, wondered what had happened. But his calls to the prison kept getting routed to the same dead-end voice mail.

“I knew, by not hearing anything, that something was not good,” he said.

In July, someone at the prison called him back to say that his brother, Eric Warner, had been hospitalized. Later that month, another call from San Quentin brought the news that Eric, 57, had died on July 25, after contracting the coronavirus during the surge of infections that sliced through the prison last year.

For many who have lost someone to Covid-19, the grief has been compounded by constant reminders of a pandemic that is still taking lives at a record pace. And for those whose loved ones were infected in correctional facilities, the loss has been further complicated by the dehumanizing bureaucracy of incarceration, and by the stigma around criminal convictions.

Hank Warner grieved with mixed feelings for Eric, who had been incarcerated on a voluntary-manslaughter conviction.

“I know it’s hard for people to empathize with people who commit the kinds of crimes my brother has committed,” he said. “But I also believe that in all walks of life, and in the relationships that we have, there is a level of forgiveness that we all should exercise.”

‘A lot of survivor’s guilt’

Hank and Eric Warner did not always get along. The elder was strait-laced, and the younger was forever getting into trouble. But they grew closer through regular phone calls during Eric’s incarceration. “I really saw this change in my brother,” Hank said. “He was helping the other prisoners. He was becoming a role model.”

Adamu Chan, an organizer with the #StopSanQuentinOutbreak coalition who was released from the prison in October, knew Eric Warner and called him “one of the elders in the community.” His loss, Mr. Chan said, was difficult to handle.

“When you’re on the inside and you’re experiencing these things, I’m not sure that you have the space to process,” Mr. Chan, 44, said. “Since I’ve been out, I think that a lot of that sadness has come back to me, and I feel a lot of survivor’s guilt.”

Anthony Ehlers, 48, was racked with remorse over the possibility that he had passed the coronavirus to his best friend and cellmate, James Scott, at Stateville Correctional Center in Crest Hill, Ill.

Mr. Scott, 58, had been hospitalized for weeks before Mr. Ehlers learned from a correctional officer that his friend had died on April 20. “I remember I was in the cell by myself, and I just got in my bed, faced the wall and sobbed,” Mr. Ehlers said through a monitored messaging service.

“You have to hide your grief in here,” he added. “This is not a nice place.”

Mr. Chan used poetry and film to memorialize the men who were losing their lives around him.

“Prison is so much about separation — being separated from families, and separated from society,” he said. “Art and imagination can be such powerful tools for you to get out of that place.”

Elisabeth Joyner, 37, who is incarcerated at Arrendale State Prison in Georgia, creates pencil portraits of people who died so they don’t have to be remembered by mug shots.

“A mug shot is one of the most dehumanizing aspects of incarceration,” she said. “It is a photo documentation of error that you will see for the rest of your life. Is it not enough that these people were dehumanized in life? Must I also dehumanize them in death?”

‘The raw end of the stick’

The United States incarcerates more people per capita than any other country. A disproportionate number of them are Black and Hispanic — two groups that have also been hit hard by the pandemic.

Families at this crossroads of personal loss and structural inequity know the heartache of losing someone twice: once to incarceration, and then again, forever, to the virus.

Inez Blue, 65, of Baltimore lost her brother Anthony Blue, 63, in May. He had been incarcerated at Roxbury Correctional Institution in Hagerstown, Md., for a crime he said he didn’t commit.

“It’s hard for me because I was the closest to him,” Ms. Blue said. “We mostly talked about the things we went through as children. It seems that we got the raw end of the stick.”

Mr. Blue had been fighting to clear his name. His lawyer, Stanley Reed, said his conviction was on the verge of being vacated early last year.

Ms. Blue, ready to care for her little brother, who battled mental illness and had blinded himself while incarcerated, set up a room in her home and bought a new quilt and curtain set.

But Mr. Blue got sick in April and was hospitalized. In video chats, Ms. Blue could tell he was in severe pain. She felt guilty for asking him to keep fighting.

“I feel like he got failed so many times,” she said. “He gave up on himself because he felt that he was never going to be free.”

‘We couldn’t talk for long’

The last time Kenosha Hines, 43, hugged her father, Carlos Ridley, it was at Pickaway Correctional Institution in Orient, Ohio, in a white-walled visiting room that smelled like sandwiches.

She used to bring her two sons. Mr. Ridley, 69, would entertain them with stories, jokes and martial arts lessons.

He had been fighting to exonerate himself using DNA evidence. But his health deteriorated suddenly in April, and in a video call, Ms. Hines noticed.

“He could barely keep his head up,” she said. “We couldn’t talk for long. The video was so raggedy, I could barely hear what he was saying.”

On May 5, a corrections officer called to tell her that her father had been taken to a hospital. That night, she watched him take his last breaths over video chat. She wondered why he wasn’t hospitalized sooner.

“It was devastating,” she said. “I can’t even put it into words. He was in that place almost my entire life, and this is how it went?”

JoEllen Smith, a spokeswoman for the Ohio Department of Rehabilitation and Correction, said any medical needs Mr. Ridley had “were identified, assessed and treated promptly.”

She added that “Covid-19 presents unique challenges in a congregate setting such as a prison, and the impact — including the loss of eight staff members and over 100 incarcerated adults — has been difficult for both the staff and inmate population.”

Her repeated calls to the federal prison on Terminal Island in San Pedro, Calif., where he was incarcerated yielded frustratingly little information. So she started a Twitter account and composed her first tweet on May 4.

“He’s in the hospital dying and no one there wants to help us by giving us information on his condition,” she wrote, to nobody in particular. “He went in for a short time for a small crime and now he’s paying with his life.”

Five days later, Mr. Cutting, 70, the man who seemed capable of befriending anyone, often teased his daughter in daily phone calls, and made it a mission to attend as many of her singing performances as he could, died from Covid-19.

The pain of losing him like that was awful, Ms. Fortney said. Grief rippled through the family, and a few months after her father died, Ms. Fortney lost her brother, Scott Cutting Jr., 50, to suicide.

“People look down on the families like we did something wrong,” she said. “We don’t stop loving our family members just because they did something that they shouldn’t have. I wish more people could see that.”

It can be hard to keep track of Covid-19 deaths in correctional facilities. Prisons don’t document fatalities in a uniform way, and obituaries often tiptoe around any mention of incarceration.

That lack of visibility helps the virus spread, Mr. Ehlers said. “More men are going to die from this in here who shouldn’t,” he added. “And the only thing that will change things is if people speak up.”

An online memorial called Mourning Our Losses has been gathering details about people who have died from the virus while incarcerated. So far, the website has remembrances of Eric Warner, Mr. Blue and about 160 others.

“There was just no space for the grief of people who had loved ones dying inside,” said Page Dukes, a writer and activist who works on the project. “That grief has been very much disenfranchised because of this idea that people who were in prison somehow deserved to have Covid — and to die of Covid — more than other people.”

The memorials include officers, health care staff members and others who worked in correctional facilities — a nod to the fact that crowded or unsanitary conditions are dangerous to employees, too, and can hasten the spread of the virus in surrounding communities.

“Crimes and convictions don’t matter to the spread of Covid in this place,” Mr. Ehlers said. “It’s an equal-opportunity killer.”

In an effort to honor the humanity of those who died, the memorials don’t mention criminal convictions.

“People who do not have an intimate familiarity with the penal system oftentimes forget several things about people who are incarcerated,” said Ms. Joyner, who draws portraits for the website. “Namely, that we are people, first and foremost.”

Mr. Ehlers, who wrote a memorial for Mr. Scott, said he knew that his tribute might be shunned because both men were convicted of murder — “huge and terrible mistakes that affect a lot of people.” But he also worried that if he didn’t talk about his grief, and about his friend, no one else would.

“We are all more than our crimes,” Mr. Ehlers said. “We are fathers, brothers, uncles, sons, cousins and friends. We matter to people as well.”

Dementia symptoms: Gene mutations can lead to brain decline and loss of motivation

Why Can’t The State Get It Right? : NPR