A life-extending prostate cancer drug has been rejected for use on the NHS after officials ruled it is not worth the money.

The innovative drug is the first ‘precision treatment’ for the disease, which treats men based on the genetic make-up of their cancer.

It has already been approved for use in Scotland but will not be available to men in England and Wales.

The National Institute for Health and Care Excellence (Nice) said evidence on the benefits of olaparib is uncertain and approving it would not be a good use of NHS funds. 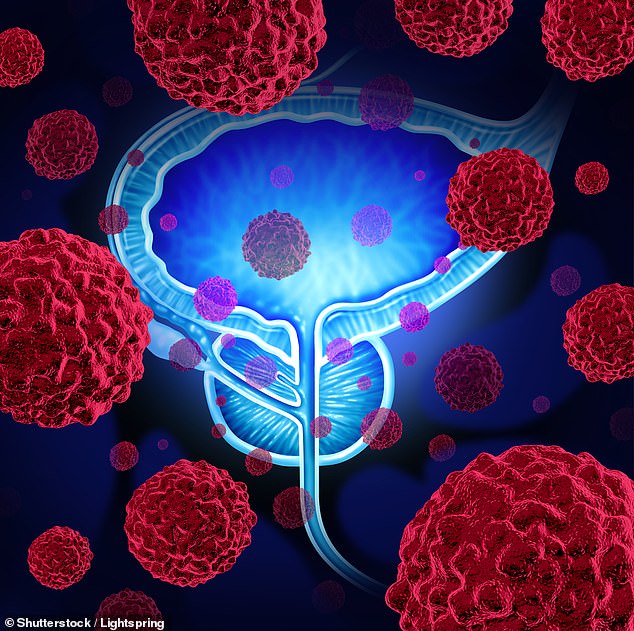 Roughly 50,000 men in the UK each year are diagnosed with cancer of the prostate – a gland found just below the bladder. Eight in ten survive a decade or more. Pictured: Stock image

The 2019 PROfound trial found that men treated with olaparib lived 7.4 months before their cancer progressed, compared with 3.6 months when they received ‘one size fits all’ hormonal treatments.

Dr Matthew Hobbs, of Prostate Cancer UK, said the charity was ‘extremely disappointed’ but was working with Nice on the issues raised.

Johann De Bono, professor of experimental cancer medicine at the ICR and leader of the PROfound trial, said: ‘Olaparib is a precision drug that can extend life for men with some mutations in their tumours while sparing them the side-effects of chemotherapy.

‘I was delighted when olaparib was approved for NHS patients in Scotland earlier this year – and it’s disappointing that this decision means their counterparts in England and Wales will miss out on such a valuable new treatment option.

‘It’s an example of the barriers that exist to making innovative drugs available at prices that the NHS can afford and is going to result in postcode prescribing across the UK.’

Nice looked at people who had already had treatment with the hormone therapies abiraterone or enzalutamide.

The current treatment for prostate cancer that has spread and no longer responds to hormone therapy is chemotherapy with docetaxel, cabazitaxel or radium-223 dichloride.

Nice said that clinical trial evidence shows that people taking olaparib have more time before their disease gets worse and live longer overall than people having retreatment with abiraterone or enzalutamide.

However, it said retreatment with abiraterone or enzalutamide is not considered effective and is not standard care in the NHS.

Nice also said it is uncertain how effective olaparib is compared with docetaxel, cabazitaxel, or radium-223 dichloride because there is no evidence directly comparing the medicines.

An indirect comparison suggests that olaparib increases how long people who have had docetaxel live compared with cabazitaxel, but this is also uncertain, the watchdog said.

Prostate Cancer UK is concerned that Nice has reviewed the same evidence as the Scottish Medicine Consortium, which approved the drug last year, and come to a different decision.

By not taking into account the unavoidable uncertainty involved in developing new treatments like this, there is a risk that other new treatments will also be held back in future, the charity added.

How To Walk More This Year, According to a Cardiologist

Tingle Your Taste Buds with These Simple and Lip-Smacking…

Dishes from Around the Country You Must Try

Here’s How You Can Enjoy August 15 at Home