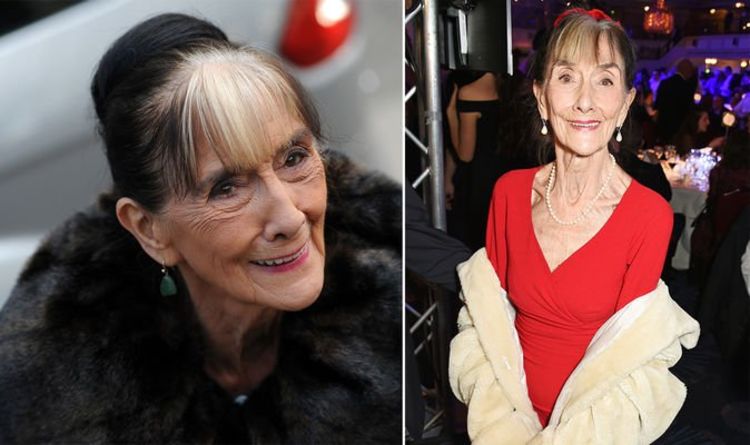 After her retirement, the actress revealed that she finds it “difficult” to tune into the BBC soap, and in more ways than one after being diagnosed with an incurable eye condition that is leading her to go blind. Alongside her deteriorating eyesight the actress has been warned by medical professionals that quitting smoking could cause her to “collapse”.

Controversially in 2017, the star underwent an eye operation in a desperate attempt to save her sight. But the 94-year-old revealed recently that despite the best efforts, her eyesight has once again deteriorated.

She told The Mirror: “I’ve got very poor sight. I’ve got extra lenses inside my eyes to try to help me read better.

“They help with peripheral vision, but I’ve got no central vision. I can’t go out socially.”

As well as not being able to go out socially, the actress has had to give up driving.

READ MORE: Dementia: The ‘first’ symptom may not be memory loss

The star has lived with the condition which is common in people in their 50s and 60s, for 10 years. She added: “I haven’t been watching it [EastEnders] as I find it difficult to see the television very clearly.

“If your sight is poor, there’s very little you can do. I read my Kindle instead. I can see where everything is around the house but nothing’s clear.

“Just pray for your health and strength, hearing and eyesight, and an active mind.”

What is macular degeneration (AMD)?
The condition is relatively common and affects the middle part of your vision.

It does not cause total blindness but can make everyday activities such as driving and watching the television more difficult.

Without treatment vision can also get gradually worse. Depending on the type of condition you have, “dry AMD” or “wet AMD”, this worsening can be either fast or slow.

Dry AMD is where people may find they have yellow deposits called drusen in their macula. These drusen cause changes to your vision and as they get bigger and more blood and fluid gets into your retina, the more distorted and blurred straight lines become. You may also have blind spots in the center of your vision.

Wet AMD occurs when blood vessels grow from underneath your macula. These blood vessels leak blood and fluid into your retina causing the same sort of symptoms. This bleeding eventually forms a scar, leading to permanent loss of central vision.

Only 10 percent of people suffer with wet AMD and symptoms are far more likely to develop quicker for these individuals.

Including making daily activities increasingly difficult, other symptoms include the following:

In order to diagnose AMD you have to go to see an optometrist who will use a magnifying glass to look at the back of your eye and overall check your vision.

The optician may also ask you to look at a pattern of straight lines that resemble a checkerboard. If any of these lines appear wavy or missing to you, this could indicate signs of macular degeneration.

It is important to see your optician in order to catch signs of AMD early and slow down the condition.

Although there is no cure, treatments are able to keep you from losing complete vision.

These treatments can include medications that block the creation of blood vessels that leak into the retina. More high-risk treatments include laser eye surgery which can destroy these abnormal blood vessels growing in the eye.

A large study conducted in the USA found that those with dry AMD could slow the disease by taking supplements of vitamin C and E, zinc and copper.  However it is important to consult your doctor before you start taking all of these supplements.