JJ Valaya’s world is a celebration of crafts and heritage, and you see a glimpse of his signature styles when you watch Black Panther: Wakanda Forever. Dressing up one of the film’s most important characters Queen Ramonda, JJ Valaya’s costumes have received accolades from across the globe.

Associating with Oscar-winning costume designer Ruth E. Carter on Wakanda Forever, this is JJ’s second Hollywood project with Ruth and her team. In conversation with News 18, JJ who is a connoisseur of couture, reminisces about designing for the magnum opus film Blank Panther: Wakanda Forever, bringing his signature styles to life with Queen Ramonda’s costumes and the overall experience of working with renowned costume designer Ruth E. Carter.

Excerpts from the interview:

It’s commendable to see your work travel across borders and also find its presence in a magnum opus like Black Panther: Wakanda Forever. Take us through the process on how it all came together.

The association started a few years ago when Ruth Carter’s team was looking for a partner in India who could work with them on creating clothes for the film Coming to America which was an Eddie Murphy starrer. They finally discovered us and that’s how we got to work together. This [Black Panther: Wakanda Forever] is our second project in Hollywood and with Ruth Carter. This one of course is extremely special in more ways than one.

We started work on this collection pre-covid for nearly eight months, but it involved a lot of to and fro and a lot of R&D. We were working very closely with Ruth’s Studio in Los Angeles and creating specialised fabrics, techniques, design, and prints. We also had to make sure that the palette of the look and feel [of the designs] is very similar to the look and feel Ruth had in mind for the entire film. 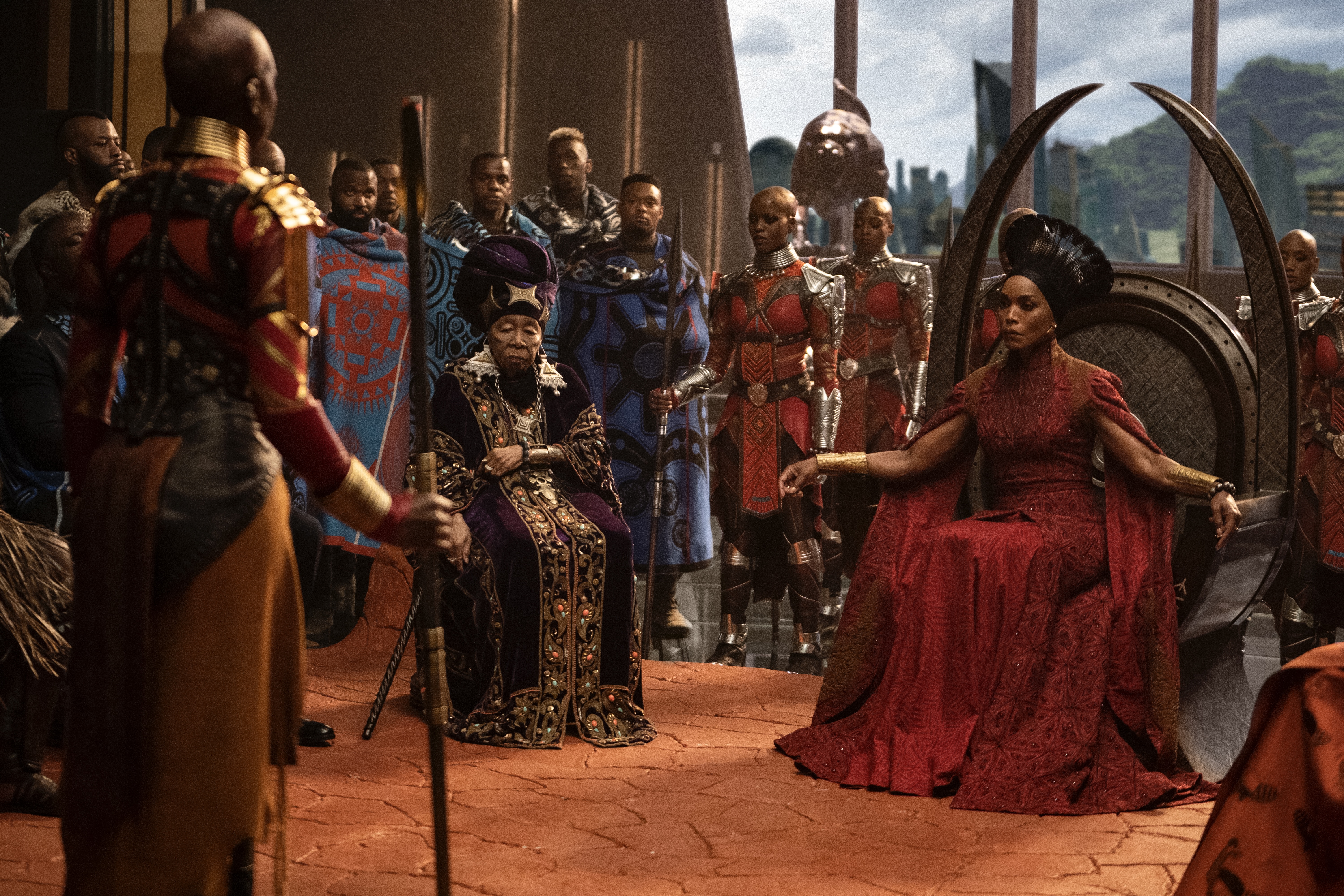 Blending the east and the west, how was collaborating with Ruth E. Carter on this project like?

This was a joint process, the East came from us and West came from Ruth. It was a blissful harmony that the two of us could relate, respond and create something wonderful together. She is an absolutely fabulous costume designer, who has won an Oscar award and has her own star and walk of fame in LA, this itself speaks volume about her talent. But what’s surprising is how respectful she is. For me that makes a very big difference.

She had a clear vision. Clearly, she has to follow the director, producer and the storyline of the film and then visualise everything. I mean putting together the number of costumes as she did is no easy task and then to trust me to kind of deliver on perhaps the most special outfits from the film, that in itself was humbling.

JJ Valaya expresses that he enjoyed creating the ivory ensemble adorned by Queen Ramonda in the film.

Envisioning Queen Ramonda who is a strong personality, how was the experience bringing her to life in JJ Valaya’s signature styles?

Black Panther is a movie where the only opportunity where one really gets to create the kind of clothes we do is for Queen Ramonda. The rest of the look is fairly futuristic or semi casual. When it comes to Queen Ramonda, and especially in Wakanda Forever, where she is now the Queen and she has to appear authoritative and take a stand, it was very important to present the character in that way.

So, we worked on 70 per cent of all of Queen Ramonda’s looks in the film. The simpler pieces, I think there were two or three casual/ simpler pieces, were handled by Ruth herself out of LA. We sat down and worked in detail on how to create the aura that the Queen needs when she’s taking control of her Kingdom.

You had a fierce and powerful actor like Angela Bassett adorn your designs, how was the experience dressing her up in your designs?

Well, we are just happy that the end result came out so beautifully and that everybody noticed and that we got the part. We got the opportunity to sort of dress the Queen and make her look as resplendent as she does. Working with Angela Bassett, of course, who is an accomplished actor, it’s a high. JJ Valaya worked on 70 per cent of all of Queen Ramonda’s looks in the film.

Your designs narrate a tale of your craftsmanship, what crafts have you included in the costumes?

Well yes, we are all about craftsmanship which is why Ruth came to us. She recognised that we have a skill, which is unique and she respected that and honoured that. There’s no place like India when it comes to exquisite craftsmanship. However, in this particular case three processes were involved: (a) Identifying and developing some special fabrics,( b) Working on a wonderful surface through the medium of prints (c) the embellishment process that went on to the garment.

Also, the signature Valaya Ethos was resplendent right from extremely fine thread work using antiquated tones, vintage metals, subtle glitter so that it looks almost museum like and not something which is new and brash.

The difference you noticed when working with a team on an international movie. Is the work culture similar on Indian movie sets?

Well, I think the primary difference that I noticed besides the professionalism, was the humility and the respect. And I think that completely changes the energy of a situation when you are working together on something absolutely wonderful. So, I have often missed that because I’ve noticed in India that success does seem to go to everyone’s head much faster probably than the west and then that starts reflecting in one’s attitude and invariably it affects the energy.

But when it came to working with Hollywood/LA and Ruth for instance, she was humble and respectful. Her team too was forthcoming, helpful, extremely meticulous in their planning and detail oriented.

How Does The Food We Consume Affect Our Quality Of Sleep?

5 Signs of Iron Deficiency on Skin, Hair and Nails

Bluemercury’s Black Friday Sale 2022 Is Here With Up…

Ace the Winter Wedding Look With These Celebrity-Approved…

Four Stressors In A Relationship That You Should Be Aware Of

What is your most-used blush?