Influenza risk: Mask wearing and social distancing could have increased your risk 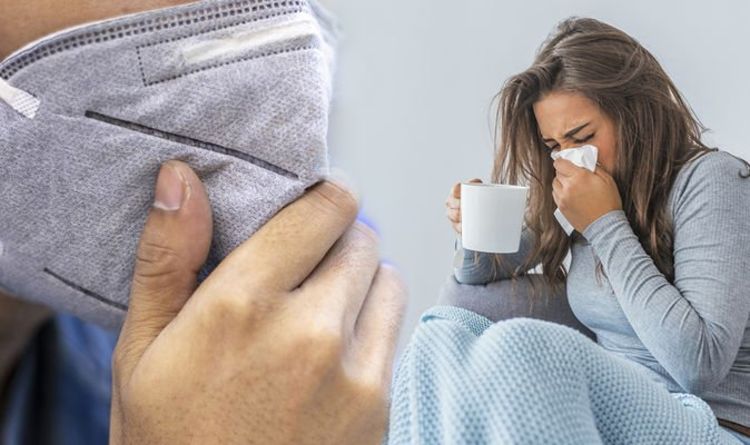 Measures meant to tame the coronavirus pandemic could be increasing a person’s risk of influenza, rhinovirus and RSV after a surge in cases were found in Australia and New Zealand. Experts believe social distancing and mask wearing have weakened people’s immune systems making them more susceptible to other viruses.

Social distancing and mask guidelines put in place to reduce the risk of COVID-19 spreading has inadvertently prevented the spread of germs and bacteria.

As those mitigation measures are lifted now, the flu is starting to spread once again.

Wearing a mask can raise awareness of the infection risk.

“Frequent exposure to various pathogens primes or jazzes up the immune system to be ready to respond to that pathogen,” said Dr Paul Skolnik, an immunovirologist and chair of internal medicine at the Virginia Tech Carilion School of Medicine, to The New York Times.

He continued: “If you’ve not had those exposures, your immune system may be a little slower to respond or doesn’t respond as fully.

“This leads to greater susceptibility to some respiratory infections and sometimes longer or more protracted symptoms.”

Common colds and the flu – which are caused by respiratory viruses – were almost non-existent in 2020 as they had little chance to spread from person-to-person.

Scientists fear that falling immunity levels to influenza – normally sustained by seasonal circulation of the virus – could now pave the way for one of the worst flu outbreaks for years.

Scientists hope this year’s disrupted seasons could reveal new information about the transmission and behaviour of these unwelcome annual guests: how these viruses respond to health measures, how they interact and what that might mean for long-term disease burdens.

Professor John Edmunds, of the London School of Hygiene & Tropical Medicine and a member of the government’s Sage committee of scientific advisors told the Telegraph: “We have effectively missed out on flu this winter, so the levels of immunity are less than would be typical.

“In fact, it is not impossible that we will have an out-of-season epidemic perhaps in the autumn, rather than winter.”

New Zealand and Australia, two countries that were among the most successful at controlling the COVID-19 pandemic, are also seeing surges of RSV, per the Times.

Things are especially dire in New Zealand, where a surge and RSV cases left many children under the age of two hospitalised.

“I haven’t seen anything like this in 20 years of working as a virologist,” said Dr Sue Huang, director of the World Health Organization’s National Influenza Centre, told The Times about the situation in New Zealand.

“There’s usually a degree of pre-existing immunity due to the previous winter. When you don’t have that kind of protection, it’s a bit like a wildfire.

“The fire can just continue, and the chain of transmission keeps going.”

The 30-Day Detox Cleanse Zoë Kravitz Does Every Year

KHN’s ‘What the Health?’: Delta Changes the Covid Conversation