Healthy Dinners for Two That Won’t Leave You With Leftovers 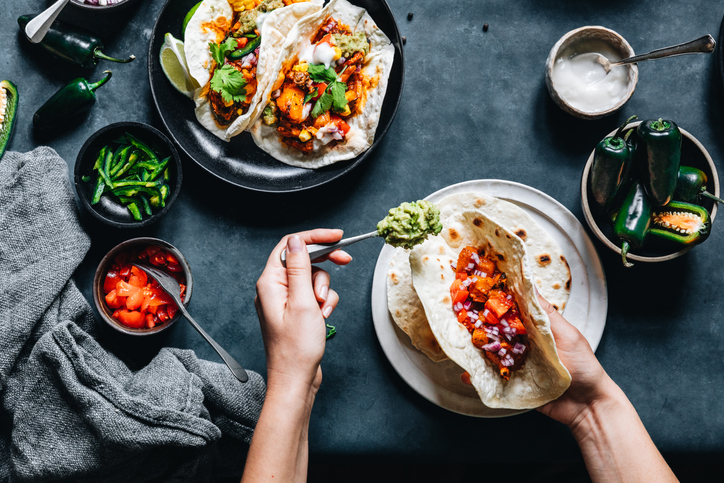 Ask anyone who lives alone or with one other person and they’ll tell you that creating scaled-down dinners can be tricky. First, unless you love cooking, it can be difficult to work up the motivation to spend the better part of the evening making a meal that isn’t going to be enjoyed by very many mouths. Second, most recipes automatically assume you want to make four to six servings. Cool, if you want to have the same meal on repeat all week—but otherwise, at least a portion of it is going to end up in the back of your fridge completely forgotten about.

To that first point, never forget that you and you alone are worthy of a nourishing meal. Cooking and feeding yourself is an act of self-care. As for the second point, that’s where the below recipes come in handy. These ten healthy dinners for two are all nutrient-dense, easy, and created with just two servings in mind so you don’t end up with an excess of leftovers. Oh, and of course they’re all delicious, too.

Ready to get cooking? Scroll down to get the goods.

Bell peppers are straight-up full of vitamin C, so having them as a core ingredient in your meal is already doing your immune system a solid. These ones are stuffed with black beans (full of full of protein and fiber), quinoa (another high-fiber source and also full of iron and folate), and lean turkey. They’re also made with anti-inflammatory spices, like cumin and cayenne pepper that add extra health benefits as well as flavor.

Get the recipe: stuffed peppers

Fish is one of the healthiest protein options you can eat, full of heart- and brain-healthy omega-3 fatty acids. This recipe—which takes less than 30 minutes to follow—cooks white fish with butter, olive oil, garlic, lemon juice, and sherry. The combination makes for a light sauce that complements the fish perfectly and doesn’t overpower it.

Get the recipe: white fish with lemon sherry sauce

If you’re looking for a dinner dish that’s both creamy and comforting, this is it. The rice is cooked in vegetable broth and dairy-free cheese, which give it a stick-to-your-bones texture. Cashews, mushrooms, and onions are all added too.

Get the recipe: risotto with mushrooms

These vegan fish tacos come together in about 20 minutes, making them the perfect weeknight healthy dinner for two. Vegan fish filets are used for the protein source and are paired with a whole bunch of fiber-rich veggies. Add a mixture of vegan mayo and adobo sauce on top to really take them to the next level.

Get the recipe: vegan fish tacos

Quinoa, kale, red cabbage, and bell peppers serve as the core of this salad making it loaded with glorious plant fiber. But the peanut ginger sauce is key, giving the salad a sweet and tangy taste and hits just right.

Get the recipe: cashew Thai salad with peanut ginger sauce

Some nights, you just want soup and nothing else will do. This tomato soup can be made with either fresh tomatoes or canned ones—either way you’ll end up with a vitamin C-rich meal. The recipe calls for garlic and don’t be afraid to incorporate it generously; the herb is linked to reducing inflammation and helping to keep blood sugar levels steady.

Watch the video below to learn more about the health benefits of garlic:

Get the recipe: tomato soup

Thick noodles, ground beef, cheese, tomato sauce loaded with Italian spices…this recipe has everything you want in a lasagna soup. It’s so hearty and nourishing you don’t need to cook anything else to pair with it.

Get the recipe: one-pot lasagna soup

Throwing pasta and frozen veggies together on the stove is one of the easiest healthy dinners for two you can make. This recipe incorporates beans for protein, feta cheese, and a few key spices. Plus, it’s so quick to cook that it’s virtually impossible to mess up.

Get the recipe: lemon veggie pasta

Another pasta dish that doesn’t leave you with enough leftovers to feed a sports team is this Greek-inspired recipe. Made with shrimp, olive oil, feta cheese, spinach, tomatoes, and pine nuts, it’s the embodiment of a Mediterranean diet-approved recipe.

Get the recipe: Greek-inspired shrimp pasta

Watch the video below to learn more about the Mediterranean diet:

Whip up a literal taste of the French Rivera with this Niçoise salad. Can we just agree that green beans are an underrated salad ingredient? They’re put to good use here, paired with leafy greens, hard-boiled eggs, grape tomatoes, garlic, onion, and potatoes. Topping it all off is a homemade anchovy vinaigrette.

Get the recipe: Niçoise salad

Love these healthy dinners for two? Get more recipe ideas in Well+Good’s Cook With Us Facebook group.

Parkinson’s symptoms: How your signature can be an early warning si…