Emergency Rooms Sign Up New Voters Ahead Of Election : NPR

Dr. Madelaine Tully, left, and medical assistant Marshae Love hold up their VotER badges at Progressive Community Health Center in Milwaukee. VotER is an initiative to register new voters at ERs and clinics. 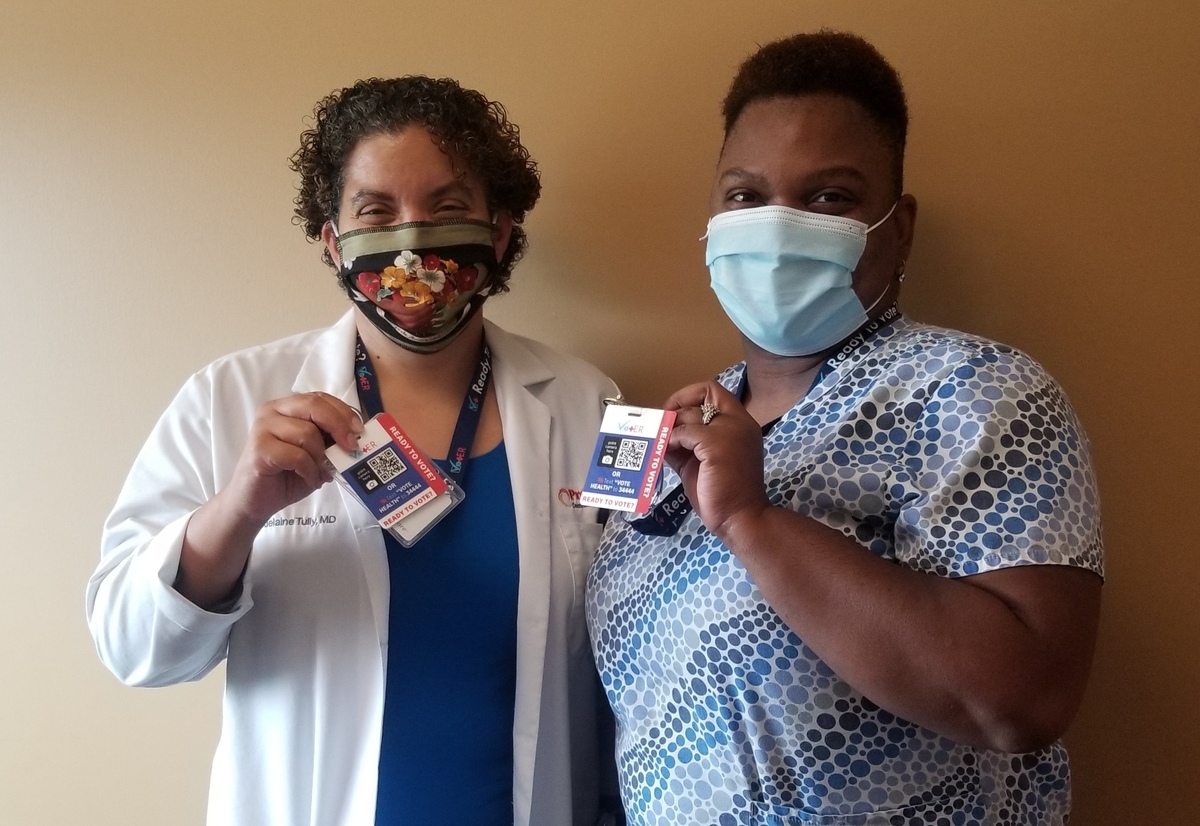 Dr. Madelaine Tully, left, and medical assistant Marshae Love hold up their VotER badges at Progressive Community Health Center in Milwaukee. VotER is an initiative to register new voters at ERs and clinics.

This year, there aren’t as many large public events with volunteers signing people up to vote in the weeks before the election, due to the pandemic.

But doctors’ offices are stepping in to fill the void, through programs like VotER and Vote Health 2020, nonpartisan efforts to register patients in free clinics, community centers and emergency rooms.

In Wisconsin, when patients come in to talk weight loss, high blood pressure or other issues, medical assistant Marshae Love, who works at Progressive Community Health Centers in Milwaukee, has also started chatting with them about getting registered, often spurred on by the badge that dangles from her neck with information from VotER.

“So, when I go in the rooms, just having conversation once I’m checking in the patients, they’ll ask like, ‘Hey, what’s that around your neck?’ So I’ll let them know it’s just a way for them to register to vote,” Love says.

Patients can scan a QR code from the badge with their cellphone, and it takes them to a website about registering to vote and even a live person and helpline if the patient gets stuck.

“Because people are on their phones all the time anyway, it’s just something quick they can do and it’s one more thing they can knock off their to-do list,” Love says.

Progressive also sends out monthly text messages asking about 9,500 patients to register. More than 80% of Progressive’s patients are Black, with a growing population of Hmong and Burmese refugees. About 90% of clinic’s patients are also low-income.

Dr. Madelaine Tully of Progressive says it’s a population that’s been hit hard by the pandemic.

“With people having to move in with family members, people having real issues with their financial security, their food security and all that,” Tully says. “So, you can imagine that registering to vote is not high on that list when you have issues of basic shelter, safety and food.”

There’s a disparity in the registration rates of Black and Latino voters as compared to white voters, in Wisconsin and across the country. To bridge that gap, Dr. Alister Martin, an ER physician at Massachusetts General Hospital, founded VotER, which is being used by more than 300 hospitals nationwide.

Martin’s experience getting health care as a kid was similar to those in low-income communities across the country. His mom worked two jobs and couldn’t always make it to a pediatrician. Sometimes they had good health insurance, sometimes they didn’t.

“What I came to learn from my own experience, which I brought, to me as an emergency room doctor, was this idea that emergency rooms play a very important role in the lives of folks who are coming from low income communities,” he says. “Yes, they address emergency. Yes, they address acute medical issues. But they also address issues that are more to do with the social determinants of health, things like homelessness, access to food, access to good insurance to be able to pay for the medications that you need.”

He also saw an overlap between the millions in the United States who are using emergency rooms for health care and those who are not registered to vote. So he started thinking about ways to offer voter registration in a way that’s nonpartisan and would encourage voter participation among vulnerable groups.

It was also a plus if it could be easy and done while patients wait, he says.

“Registering to vote in this country is like running an obstacle course,” Martin says. “The rules to register vary widely by state and in some places require tracking down disparate pieces of information in order to begin the process.”

Martin says health care professionals are in a good place to start the conversation, because the pandemic has made voting a public health issue.

“Who better than health care workers to be able to advise folks on, ‘Look, you know, this is, this is not the sort of the usual way that this works. And you ought to think about taking extra precautions and voting in a safe way this time around.’ “

It’s a nonpartisan program and health care workers help patients figure out how to vote, but not who to vote for. Another program, called Patient Voting, helps patients who are unexpectedly hospitalized during the days and weeks before the presidential election cast a ballot.

John Curiel of MIT’s Election Data and Science Lab says the programs are a good idea and will almost certainly pay off with more political participation.

“If you look at past American historical trends, participation, politics and registration to vote, usually it was done not by going door to door, but rather by going to a central location where everyone was,” says Curiel. “So, in that sense, the hospital idea, that will be one way to get everybody in one place.”

With the 2016 election having come down to about 100,000 votes in swing states, Curiel says any registration or turnout efforts could be the deciding factor in this year’s election.

Experts worry antibiotic resistance may be worsening during COVID-19

Some Signs of Recovery From Severe Covid Lung Damage

Gum disease could raise your risk of heart failure and…