In a February visit to Pfizer’s Kalamazoo, Mich., manufacturing complex, President Biden said the administration had “used the Defense Production Act to speed up the supply chain for … key equipment, like fill pumps and filters, which has already helped increase vaccine production.” 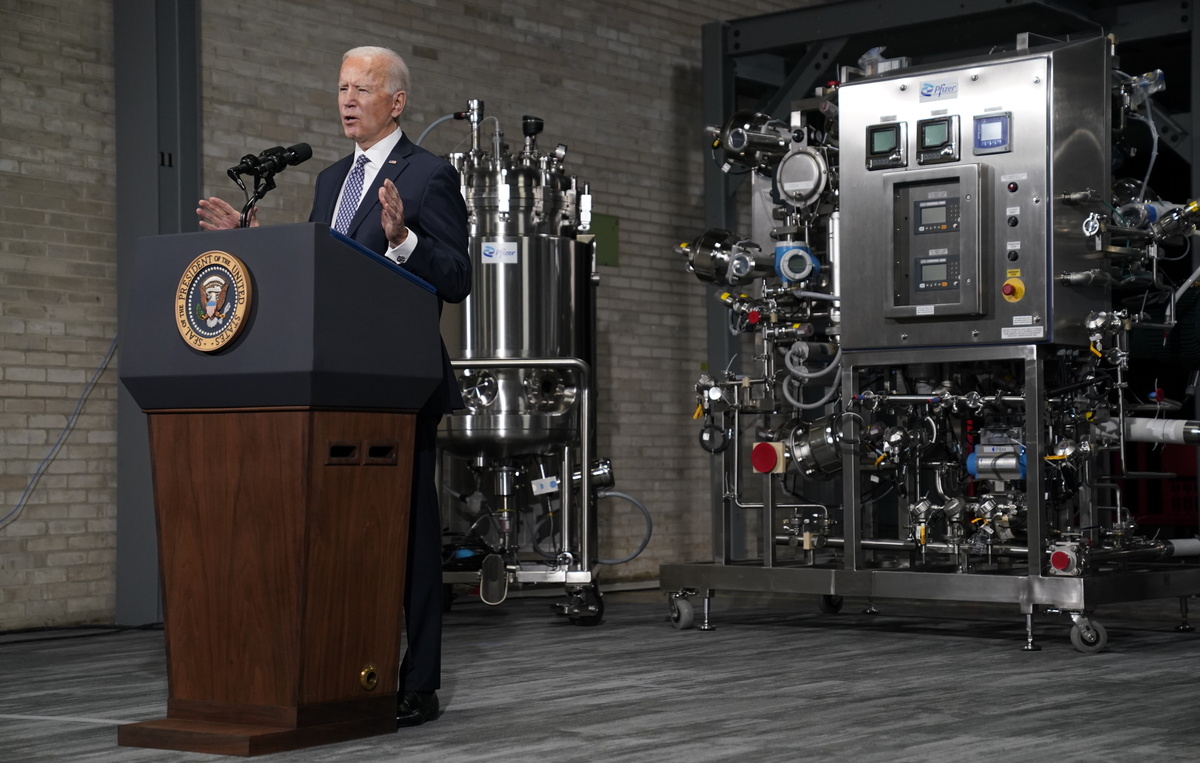 In a February visit to Pfizer’s Kalamazoo, Mich., manufacturing complex, President Biden said the administration had “used the Defense Production Act to speed up the supply chain for … key equipment, like fill pumps and filters, which has already helped increase vaccine production.”

In the run-up to President Biden’s promise Tuesday that there would be enough COVID-19 vaccines for every adult in the United States by the end of May, he talked up a Korean War era law called the Defense Production Act.

Biden mentioned it in his first presidential remarks about the pandemic fight from the White House State Dining Room on Jan. 26. He brought it up again during a Feb. 19 trip to a Pfizer vaccine factory in Kalamazoo, Mich., while he stood in front of gleaming stainless steel production equipment. He brought the law up on Feb. 25 after watching a Washington, D.C., resident get vaccinated in front of cameras at the Eisenhower Executive Office Building for an event to celebrate the 50-millionth shot. Less than two hours later, he talked about the law in the National Governors Association’s winter meeting.

So perhaps it was no surprise Biden brought up the Defense Production Act yet again in his announcement this month that his administration brokered a deal between two pharmaceutical rivals — Merck and Johnson & Johnson — to increase the vaccine supply and help deliver doses earlier than expected.

“We also invoked the Defense Production Act to equip two Merck facilities to the standards necessary to safely manufacture the J&J vaccine,” he said, adding that Johnson & Johnson was getting other government help as well. “In addition, we’ll continue to use the Defense Production Act to expedite critical materials in vaccine production, such as equipment, machinery, and supplies.”

So what is the Defense Production Act and why is it being name-checked so often?

The law was enacted in 1950 law and it gives the president powers to allocate “materials, services, and facilities” and award contracts that take priority over any other contract to “promote the national defense.” In this case, the law is being used to defend the country against the virus.

In extreme situations, the law can also be used to prevent companies from exporting certain goods to keep them within the United States.

Since the start of the pandemic, the federal government has used the law frequently in the crash program to develop COVID-19 vaccines. While the law may seem like a magic wand to help jump start vaccine production, there are limitations to the act’s power and difficulties in tracking how well it actually works.

The power of the law rests in its ability to move the needs of vaccine makers to the front of the supply line by designating their contracts as what are called rated orders.

“There seems to be a belief in society that the leveraging of rated orders is going to, you know, overnight increase significantly the amount of capacity to produce vaccines in the industry,” says Sean Kirk, Emergent BioSolutions’s executive vice president of manufacturing and technical operations. “And the fact of the matter is, it’s just it’s just not that simple.”

Emergent BioSolutions is a contract manufacturing company based in Maryland that is currently making active pharmaceutical ingredients for the AstraZeneca and Johnson & Johnson COVID-19 vaccines. In June 2020, the federal government added a $628 million modification to an existing contract with Emergent. And Emergent was required under the Defense Production Act to put vaccine work first, just like some of its own suppliers.

Biden’s team extended the act’s use in the Pfizer contract, helping the company get equipment to expand its vaccine production, an administration official told NPR. This was a step the Trump administration “deliberately withheld” the official said, adding that the Biden administration is working with vaccine manufacturers to determine whether more actions are needed.

The administration is also looking into Defense Production Act uses for essential vaccine ingredients and manufacturing must-haves that get used up quickly, which aren’t currently in shortage domestically but could be limiting factors in the future.

However, the Biden administration hasn’t always needed the Defense Production Act to compel cooperation. Sometimes, companies are willing to pitch in and prioritize pandemic items without being forced to do so. Even though the administration could have used the act to force Merck to work with Johnson & Johnson, it was able to make that happen without it. Instead, the act was used for equipping the facilities and helping Merck get to the front of the line on orders for ingredients, supplies and other items.

The administration says that getting Merck’s production online will take a few months, however. In the meantime, it’s helping Johnson & Johnson produce vaccines around the clock and bringing in the Department of Defense to provide daily logistical support.

The Trump administration said it used the Defense Production Act often in support of Operation Warp Speed, though the specifics are hard to come by. There’s no central database of how the law was used or how it helped. In fact, the contracts that include it often don’t even say “Defense Production Act.” Instead, they say “rated order.”

To find out how the federal government used the Defense Production Act for things like N95 masks, ventilators and mostly things unrelated to the vaccine race, the Government Accountability Office had to review press announcements and then examine the individual contracts, looking for those magic words: rated order.

Contracts are, of course, something the GAO has access to without needing to wait for public records requests like members of the public and the press. NPR, members of Congress and advocacy groups have sought vaccine contracts to varying degrees of success. Even when they’re released, they’re often obscured by redactions.

Here’s what we do know: All six COVID-19 vaccines that were developed as part of Operation Warp Speed have benefited from the Defense Production Act in some way, according to a press release by Lisa Simunaci, a former spokesperson for the Office of the Secretary of Defense.

The Defense Production Act has also been used to speed the work of contract manufacturers like Emergent, and to facilitate production at companies like Cytiva, a division of Danaher that makes hardware used in biotech manufacturing.

As for Emergent, the vaccine ingredients it’s under contract to make for Johnson & Johnson (and AstraZeneca) are complicated to manufacture. The Defense Production Act helped the company get to the front of the line on its orders for equipment like bioreactors.

Still, the Defense Production Act condensed a process that would normally take two or three years down to six or seven months, he says.

But without a centralized database or study, it’s hard to see from the outside exactly how the act is helping.

Funneling finite resources toward the goal of vaccine development can have unforeseen consequences.

“It’s very much a blunt instrument to be used, when you may need a scalpel,” said Kelly Goldberg, a vice president in the law division of the drug industry trade group, Pharmaceutical Research and Manufacturers of America. “You need to make sure people are really thinking of all the downstream implications.”

Drug shortages related to vaccines have already started to crop up.

Horizon Therapeutics said in December that its thyroid drug, Tepezza, would likely be in short supply because the contract manufacturer tasked with manufacturing it, Catalent, was forced under the Defense Production Act to process and package COVID-19 vaccines instead.

“We’ve heard from many of you. We understand the urgency to resume or start treatment,” Horizon CEO Tim Walbert said in a Feb. 1 video posted on the company’s Facebook page. He said the company is working with the Food and Drug Administration to get alternative manufacturing capabilities approved for the drug.

On Feb. 11, Pfizer sent a letter to hospitals alerting them of “short-term supply interruptions due to increased vaccine production” affecting cleocin phosphate, an antibiotic; Depo-Medrol, a steroid; as well as depo-testosterone and testosterone cypionate, which are used to treat certain hormonal problems and some breast cancers. “These temporary interruptions are solely a result of the prioritization of vaccine production and are not due to any manufacturing delays or issues,” the letter says.

Dr. Luciana Borio, a former acting chief scientist at the FDA, says the United States and the United Kingdom have been doing a good job with due diligence before pushing prioritization orders at vaccine and vaccine-related facilities. As a result, the governments have a “better grasp” of the complex supply chain that’s usually at least somewhat shrouded in trade secrecy, she says.

“But I think there’s a limit to what the DPA [Defense Production Act] can do with respect to actually augmenting supply dramatically because it doesn’t create new atoms,” she said during a media call organized by Georgetown University. “It’s just moving them around … [the ones] that already exist.”

Still, COVID-19 vaccine production faces urgent problems. The White House acknowledges that Johnson & Johnson is behind. Meanwhile, Pfizer and Moderna doses have been slow to roll in throughout the winter as Americans struggled to get access to vaccines, though production has increased lately.

Not only is there a shortage of factories that can fill vials with vaccine and get them ready for distribution, but the supply chain is filled with weak spots exacerbated by the pandemic, according to a February GAO report.

One facility making vaccines told the office it had a hard time getting “disposable reactor bags, reagents and certain chemicals.” Facilities also had issues getting glass vials and prefilled syringes. Things that normally took a week to get before the pandemic, took a month or three months to arrive.

So how could the act be used more aggressively? Attorney Franklin Turner, a partner at McCarter & English who specializes in government contracting, isn’t quite sure.

“It’s being used extensively for the vaccine effort, for every aspect of manufacturing associated with the vaccine effort,” Turner said. “I mean, I see rated orders constantly across my client base. So, I don’t know that there’s anything more the government could be doing in that respect.”

Pharmaceutical executives echoed this assessment during a Feb. 23 congressional hearing, when House lawmakers asked whether the government could do more to help spur faster vaccine production using the Defense Production Act.

“I think the DPA generally is certainly very useful, but I think it’s. . . a targeted piece of legislation and something that should be used to address very specific problems rather than used generally,” said Pfizer Chief Business Officer John Young. “But we’ve certainly found that to be very helpful and very grateful for the government’s continued support.”

Amid Covid-19, a look at Countries that are Welcoming Tourists Back

Lisa Marie Presley was ‘back on opioids before Golden…