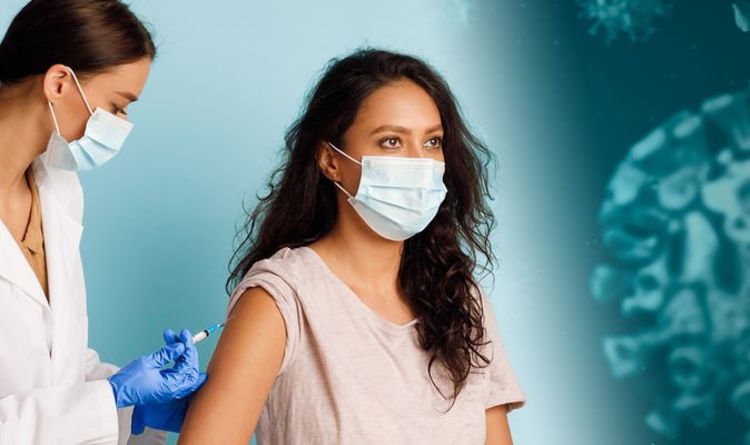 Vaccinations are not 100 percent effective; there are 1,917 new daily symptomatic cases of Covid in the vaccinated population – an increase of 89 percent compared to last week. However, Tim Spector OBE – the Professor of Genetic Epidemiology at King’s College London – said: “It’s clear that this is an epidemic among the unvaccinated and partially vaccinated populations in the UK.” People who’ve only had one jab are only partially protected from the virus.

“The COVID-19 situation in the UK has rapidly changed from one of the best performing nations to a nation again struggling with rising cases,” warned Professor Spector.

In the unvaccinated group, there have been 9,991 new daily symptomatic cases of Covid.

This is a whooping increase of 114 percent since last week, highlighting how contagious this new Delta variant is.

The UK’s “R” number is now 1.3, suggesting that the pandemic is growing in size.

READ MORE: Covid symptoms: Signs in the feet to spot – from skin lesions to Guillain-Barre Syndrome

In the latest Government statistics, this is now translating into hospital admissions and the number of deaths.

In the past seven days, 925 people have been admitted to hospital and, sadly, there have been 55 deaths within the past 28 days following a positive Covid test.

These figures suggest that Freedom Day – marked as June 21 – is less likely to go ahead.

As the Government continued to say, it’s about data not dates, but the official announcement is not due till Monday, June 14.

Professor Spector stated that the official number of cases is now the “highest daily figure since late February”.

He put the rapid increase in cases down to two compounding factors – “increased social interaction and a newly dominant variant that is much more transmissible”.

However, “vaccines are working”, but people need to “exercise caution” if they feel unwell.

“The race is on to fully vaccinate the whole population to save lives and return to normal life,” Professor Spector concluded.

Government figures also reveal that 28,857,102 people have had their second jab.

The Covid Symptom Study demonstrated that the number of Covid cases has mostly increased in the 20-29 age group.

This has been closely followed by the 0-19 age group – again, these statistics show that people not yet offered the vaccine are most at risk of catching the virus.

At present, 25-year-olds are now eligible to have their Covid jab and will be invited by the NHS to do so via text message.

The Government are currently aiming to offer a jab to all over-18s by the end of July.

9 Liquids That Suppress Appetite and Help with Weight Loss

How to get rid of visceral fat: Studies show that cinnamon,…