Boris Johnson will have to wait for weeks to put the Partygate row behind him because Scotland Yard is still contacting suspects.

The Prime Minister has until around 10pm tonight to respond to a police questionnaire on whether he broke lockdown rules at Downing Street parties.

A Metropolitan Police spokesman said the questionnaires are being sent in batches to people they believe attended the gatherings.

They started to go out at the end of last week, but it is not clear how long the process will take.

It raises the nightmare prospect for Mr Johnson that the forms may continue to be handed out over weeks, meaning he is unable to draw a line under the row.

Some officials who attended a ‘bring your own booze’ party in the No 10 garden in May 2020 are yet to be contacted. 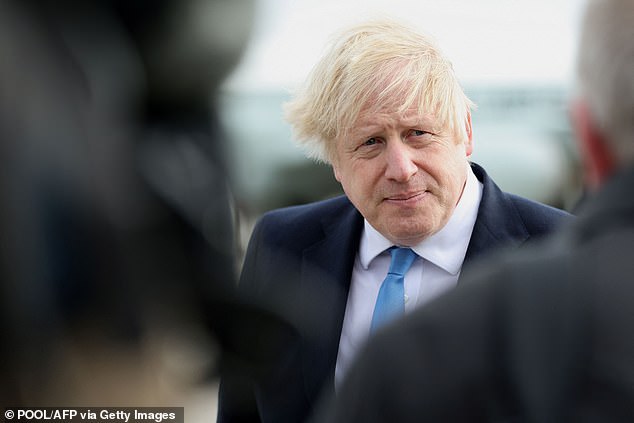 No 10 declined to say whether the PM’s questionnaire covered all the gatherings he attended, or whether he might be contacted about other events.

The Metropolitan Police has not said whether any fines will be issued in one go at the conclusion of its investigation, or whether they could be given in stages.

Scotland Yard has sent emails to more than 50 people demanding to know about their presence at 12 gatherings under investigation.

But some of the suspects say they have been contacted by officers even though they were not at any of the events.

A Whitehall source said: ‘People have received emails asking them about parties they know they did not attend as they had coronavirus and were isolating at home at the time.’

Mr Johnson is expected to face growing calls to resign if he is fined, but his allies have insisted he is going nowhere.

Police are investigating a total of 12 gatherings in Downing Street and next door at the Cabinet Office on eight dates – including Mr Johnson’s 56th birthday and the day before Prince Philip’s funeral.

Scotland Yard says the questionnaires ask for an ‘account and explanation of the recipient’s participation in an event’ and have ‘formal legal status and must be answered truthfully’.

‘It should be noted that being contacted does not mean a fixed penalty notice will necessarily be issued to that person,’ the Metropolitan Police said in a statement last week.

‘Nevertheless, if following an investigation, officers believe it is appropriate because the Covid regulations have been breached without a reasonable excuse, a fixed penalty notice will normally be issued.

‘We understand the interest in and impact of this case, and are progressing the investigation at pace. We are committed to completing our investigations proportionately, fairly and impartially.’

Earlier this week when asked whether he had submitted his reply, the Prime Minister told reporters: ‘All that process has got to be completed before I can say anything more, but I look forward to telling you a lot more in due course.’