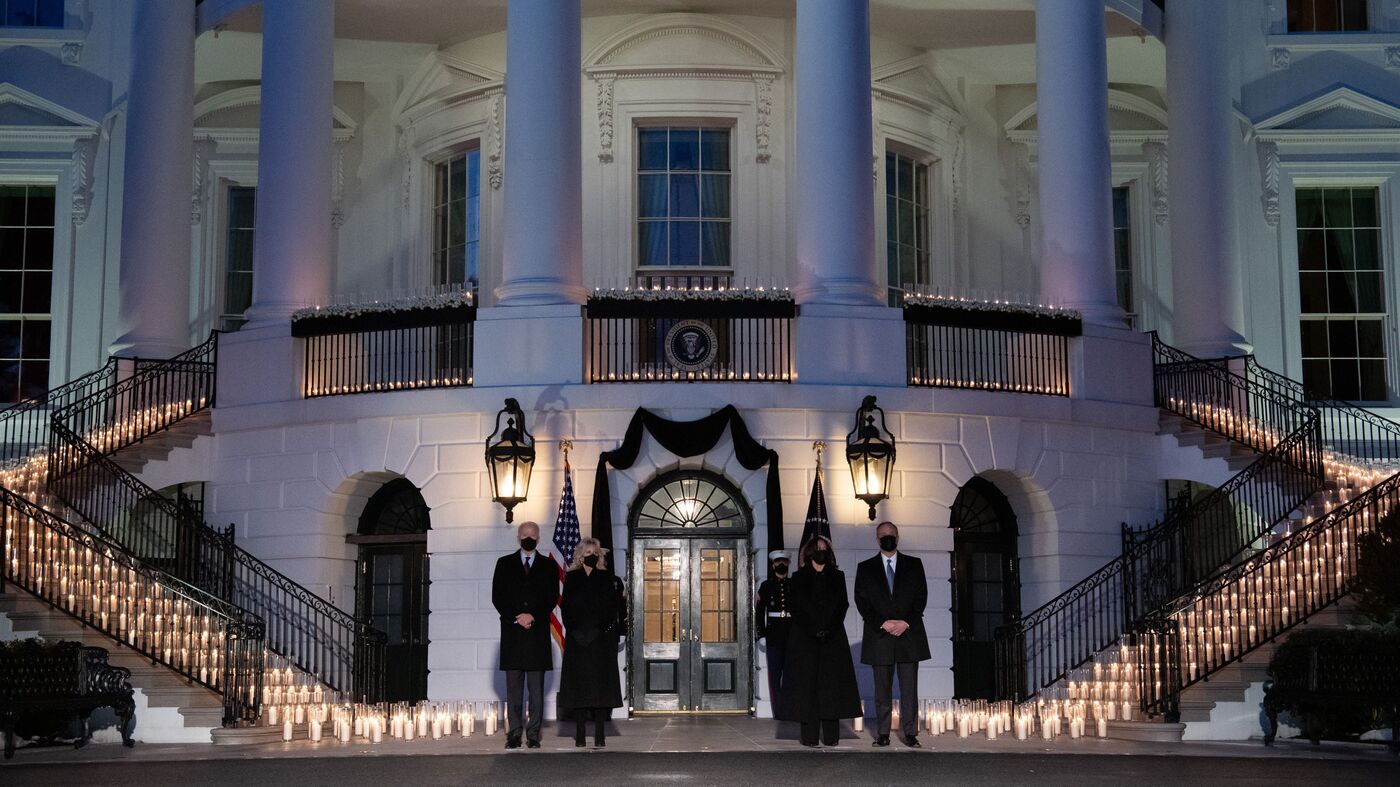 L-R: President Joe Biden, first lady Jill Biden, Vice President Kamala Harris and Doug Emhoff, hold a moment of silence and candelight ceremony in honor of those who lost their lives to the coronavirus outside the White House on Monday evening. 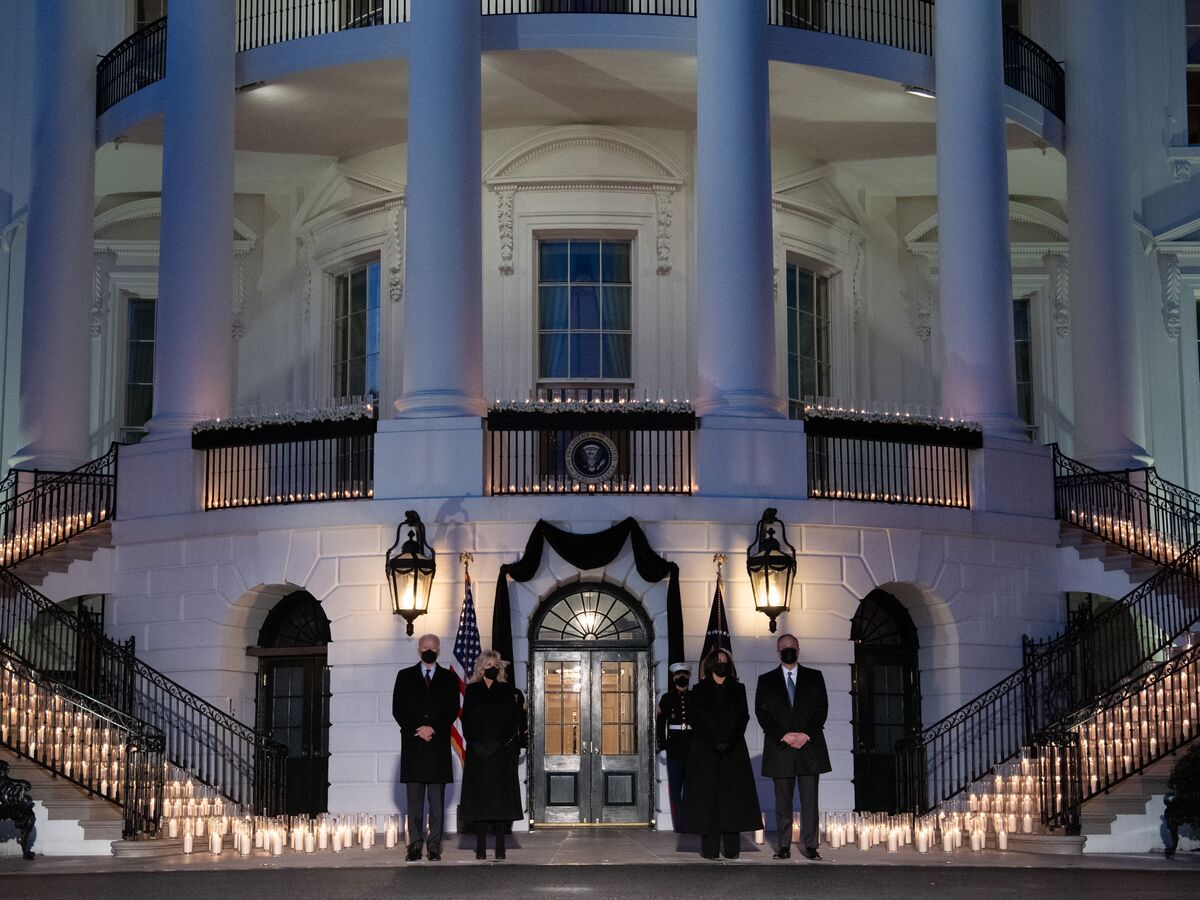 L-R: President Joe Biden, first lady Jill Biden, Vice President Kamala Harris and Doug Emhoff, hold a moment of silence and candelight ceremony in honor of those who lost their lives to the coronavirus outside the White House on Monday evening.

President Biden and Vice President Harris acknowledged and honored a grim milestone Monday: the death of more than 500,000 Americans from COVID-19.

Biden and Harris, along with first lady Jill Biden and second gentleman Doug Emhoff, emerged from the White House at sundown. They stood at the foot of South Portico, covered in 500 candles honoring the dead, and listened to a Marine band play Amazing Grace as they held a moment of silence.

Before the brief ceremony, Biden spoke, emotionally and somberly, from the White House. As he often does in moments of tragedy, Biden spoke directly to people who have lost friends and family members. “I know all too well,” Biden said. “That black hole in your chest. You feel like you’re being sucked into it. The survivor’s remorse. The anger. The questions of faith in your soul.”

Biden’s first wife and daughter were killed in a car crash shortly before he was sworn in as a U.S. senator. His son Beau died from brain cancer when Biden was vice president.

While President Trump repeatedly downplayed and sought to minimize the COVID-19 pandemic, Biden is pushing Americans to acknowledge and directly confront the enormity of the loss the country has experienced over the past year, even if that action brings pain.

“We have to resist viewing each life as a statistic, or a blur,” he said Monday, in the second ceremony he’s held to honor people killed in the ongoing pandemic.

“To heal we must remember. It’s hard, sometimes, to remember,” Biden said on the eve of his inauguration, in a similar ceremony at the steps of the Lincoln Memorial. At that time, the country had just marked 400,000 COVID-19 deaths.

Remembering, he said, is “how we heal. It’s important to do that as a nation.” Biden echoed the sentiment Monday, emphasizing his own experience of loss. “I know it’s hard. I promise you,” he said, “I remember.”

Biden acknowledged how each family touched by death during the pandemic has experienced a personal level of pain. “The birthdays, the anniversaries, the holidays without them. And the everyday things — the small things, the tiny things — that you miss the most: that scent when you open the closet, that park that you go by that you used to stroll in. That movie theater where you met. That morning coffee that you shared together.”

Remarkably, Biden’s inauguration-eve ceremony was the country’s first national collective moment of mourning for a pandemic that has upended life around the world, thrown the economy into a recession, and, at this moment, has now killed a half-million people in the U.S.

On Monday, ahead of the latest grim milestone, Biden ordered flags on federal property to be flown at half-staff for five days.

As grim of a marker as a half million dead — more, Biden said Monday, than the American soldiers killed in both world wars and the Vietnam War combined — it comes at a time of comparative hope: new coronavirus cases, hospitalizations, and deaths are all declining. The vaccination of millions of Americans — and the federal government’s purchase of hundreds of millions of additional doses — has pointed to an end-point that could come sooner, rather than later. But experts caution the progress is fragile.

Still, the equivalent of a large American city’s population has now died from a pandemic lasting a bit more than a year. And no matter how quickly the U.S. achieves herd immunity through vaccination and people who have recovered from COVID-19, there is no doubt that many thousands more will die.

“I promise you,” Biden said Monday night, as he often does delivering eulogies and marking deaths, “the day will come when the memory of the loved one you lost will bring a smile to your lips before a tear to your eye. It will come, I promise you.”