A businessman who was booted off Alan Sugar‘s ‘The Apprentice’ is embroiled in a legal row with his neighbours over three feet of land between their £1m homes.

Alex Britez, 39, who appeared on the seventh series of the BBC show in 2011, is being sued by next-door neighbours David and Isabel O’Brien over a tiny passageway between their homes in Westwood Park, on the border of Dulwich and Forest Hill.

The row was sparked in 2018 when Mr O’Brien’s stepfather Roy Curtis fell into a hole, which Mr Britez’s mother had dug in the passageway alongside the property 15 years earlier.

It has now escalated to court, with the O’Briens claiming the trench is dangerous and that the entire passageway between the properties belongs to them anyway.

But Mr Britez argues that the true boundary between the two homes is the wall of his home, so that all of the passageway belongs to the O’Briens.

They, however, say they have a right of way over the width of it and that Mr Britez is obligated to make the trench safe. 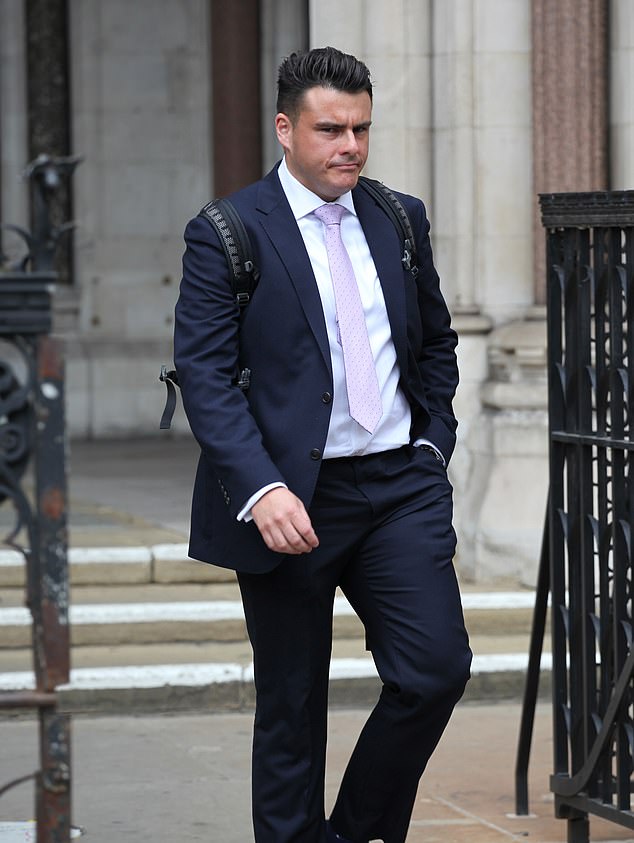 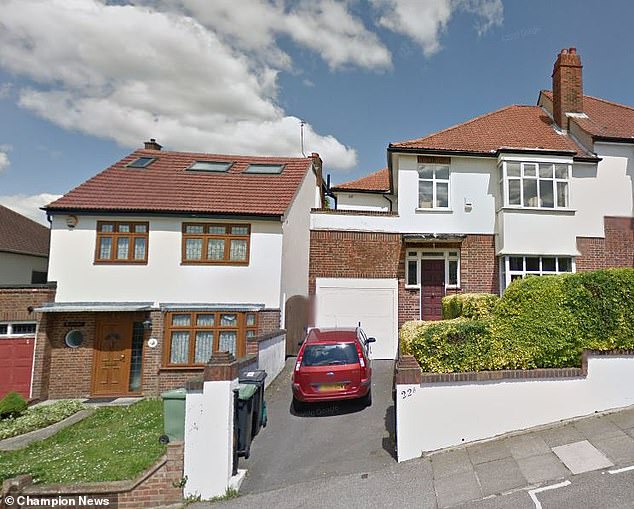 The O’Briens claim the trench is dangerous and that the entire passageway between the properties belongs to them anyway, while Mr Britez argues the true boundary between the homes runs down the middle of it 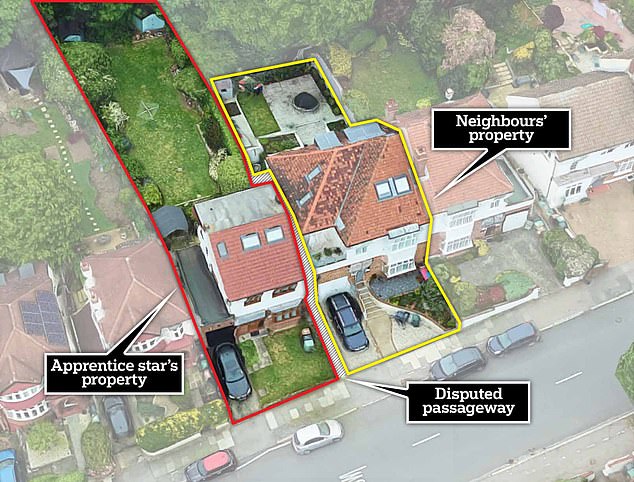 Mr Britez was labelled a ‘good talker’ by business mogul Lord Sugar on the BBC show, and described himself as ‘ambitious, driven and extremely focused’ having started his career as an estate agent’s teaboy and progressing to managerial roles.

He now works as head of sales for a major property development company.

Central London County Court heard that Mr Britez has long lived in the property in the affluent area, which previously belonged to his mother, Mary Britez.

Neighbours 52-year-old Mr O’Brien, a builder, and his wife, a 47-year-old tax director, moved into the four-bedroom semi-detached house next door in 2015.

The properties are separated by a narrow, gated passageway, which gives access to the O’Briens’ garage and back garden, their barrister Howard Smith told the court.

Prior to their move into the property, the surface of the passageway had been dug to a depth of a few inches along the length of Mr Britez’s wall due to damp issues in his home. The work was completed in 2007.

The neighbours were initially on good terms but a row began in 2018 when Mr O’Brien’s stepfather fell into the trench.

The barrister told the court the ‘rather haphazard’ trench narrows the useable width of the passageway and that Mr Britez and his mother, who ordered the work when she owned the house, insisted it remain open.

‘The consequence is that the surface of the passage is now very narrow, and is dangerous,’ he said. ‘Something needs to be done.’

‘Mr and Mrs O’Brien wish to be able to use the passage safely, as it was used for very many years [before the trench was dug].

‘However, they recognise that Mr Britez wishes to avoid a recurrence of the damp.’

He said Mr O’Brien had previously suggested that a metal grate be installed over the trench to make it safer while still preventing damp issues for Mr Britez.

But the proposal was rejected by Mr Britez, resulting in a full-blown court row over who owns the three foot wide passageway.

Giving evidence, Mr O’Brien said he did not think ‘for one second’ that he might not be buying a property which came with possession of the entirety of the passageway alongside it.

He told the court the neighbours were initially friendly towards each other and that there had been no disagreement over the owner of the passageway, and that conversations had been around how to make it safe, not about where the boundary lay.

‘I was led to believe that Britez had a damp problem and could see no problem in fixing it – that’s what I do for a living all of the time,’ he said. 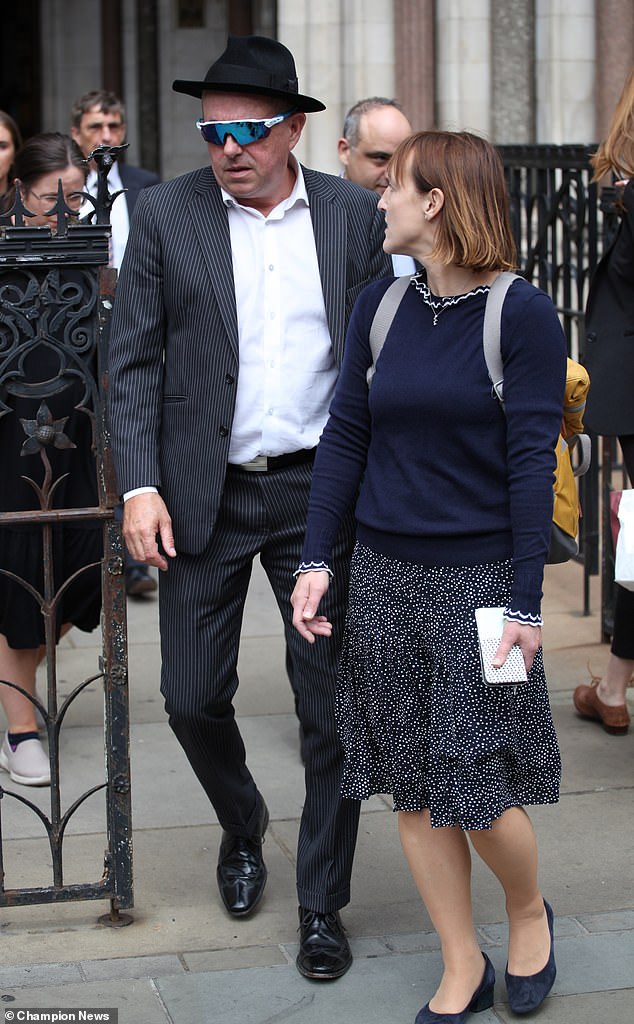 David and Isabel O’Brien (pictured outside court), moved into the four-bedroom semi-detached house next door in 2015 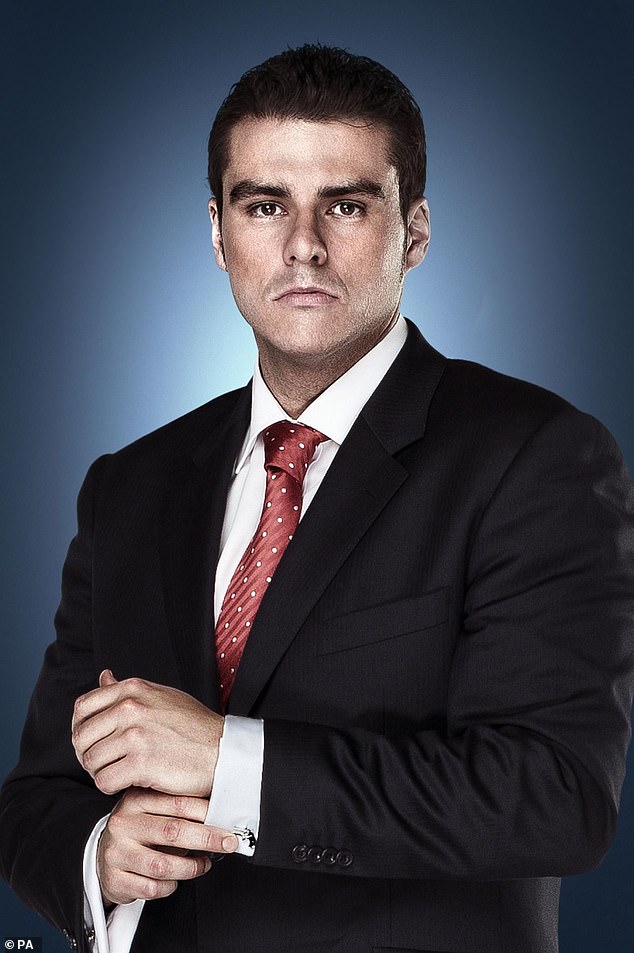 ‘We had a discussion in the garden about how we were going to fix the problem. At the time, Alex was quite happy that my solution was a good solution.

‘There was no talk of a boundary. It was about making it safe.

‘I was talking about filling and making the hole safe right from the off. It just needed to be done faster because I didn’t want anybody else to fall into the hole.’

Mrs O’Brien added that she never thought there was a ‘boundary issue’, adding: ‘We were just trying to make the area safe.

‘It’s totally logical that we own the passageway, given that its sole purpose is to access our garage and rear garden.’

Mr Britez’s barrister Simon Brilliant argues that the boundary between the properties is not along the side of his wall, but somewhere along the middle of the passageway.

An old wall buried below the surface of the passageway, he argues, is the most likely line of the true boundary, meaning part of the width of it belongs to Mr Britez.

The previous owner of the property next-door had agreed to that when allowing the trench to be dug, he told the court.

‘The whole purpose of the excavation was to create a gap…It was intended to be permanent,’ he said.

‘There was no suggestion that anyone at the time envisaged that it would be filled within a short or any time frame.

‘It is regrettable and disappointing that despite having been told in the clearest terms before they purchased that they did not own the disputed land, they have years later now chosen to assert otherwise.

‘They were quite content to live under a regime whereby the excavated land could not be used by them. It was not until summer 2018 that they questioned the ownership of the disputed land.’

He said Mr Britez has previously offered to put up railing down the middle of the passageway to prevent anyone else falling in, but denied that it was dangerous.

‘Given that there was no accident between 2007 and 2018, it is submitted that the disputed land is not unsafe,’ Mr Brilliant added.

‘It is perfectly safe, providing all reasonable care is taken when walking down the passageway.’

Mary Britez also told the court that there had always previously been a gap between the property she previously lived in and the ‘boundary wall’ running down the middle of the passageway.

Tingle Your Taste Buds with These Simple and Lip-Smacking…

Dishes from Around the Country You Must Try

Here’s How You Can Enjoy August 15 at Home