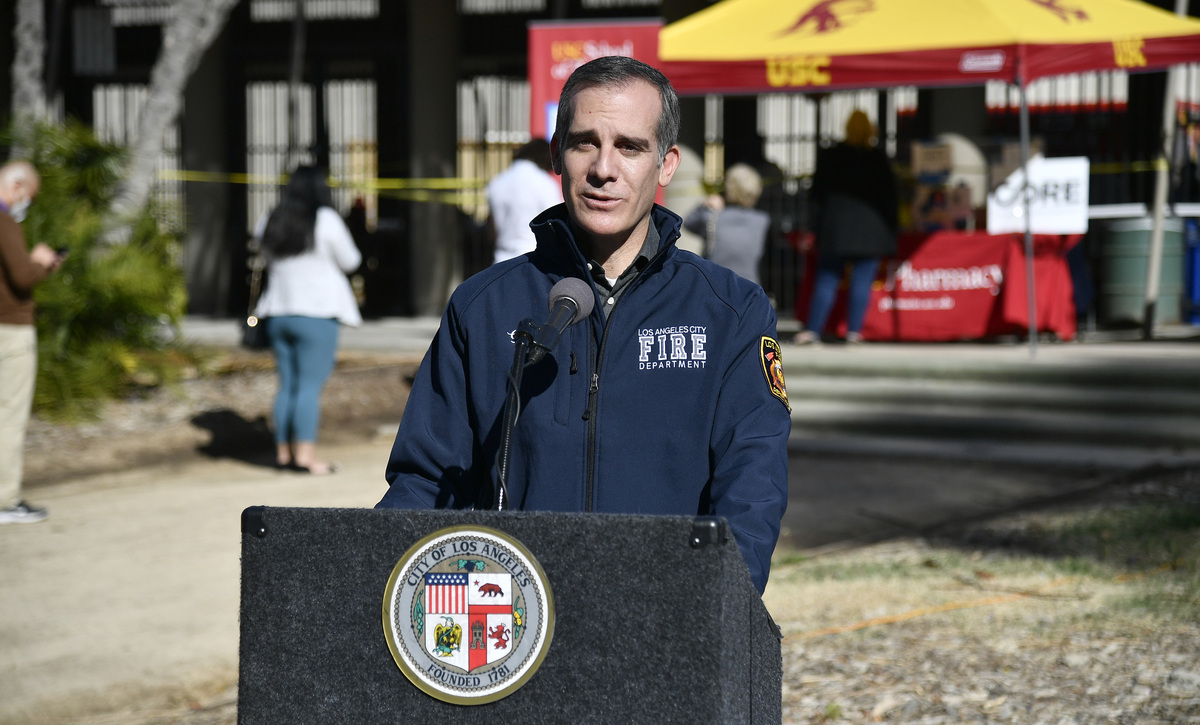 “The toughest thing right now isn’t just space — though it’s pinched — it’s really personnel and getting enough people to be there for the shifts to save lives,” Garcetti tells All Things Considered. “That’s increasingly where we are feeling the crunch.”

A startling 7,613 patients are currently hospitalized with COVID-19 in Los Angeles County, including at least 1,580 of whom are in ICUs as of 4 p.m. ET on Thursday, according to the state Department of Public Health website.

As much as the health system expected a surge in cases, Garcetti says there is only so much staffing available to brace for the influx of patients.

“The plans were there to have surge capacity and that’s what we’re seeing enacted,” he says.

Now, the number of ICU beds available is “very close” to operating at that new surge capacity, says Garcetti.

The staffing crisis is further strained by front-line workers’ daily exposure to the coronavirus. During the second week of December alone, 2,191 health care workers tested positive for the virus — a 25% jump in cases compared to the previous week.

The city’s vaccine distribution efforts give the mayor some sense of hope. He says some 85,000 to 90,000 Angelenos have already received their first dose — largely health care workers, nursing facility residents and firefighters.

But he says Los Angeles has the capacity to inoculate its population at a faster pace — thanks to the infrastructure it set up for testing, Garcetti says — and is pressing the state and federal governments to accelerate its distribution of the Moderna and Pfizer-BioNTech vaccines.

“We’ve got the storage, we’ve got the firefighters, we’ve got the volunteers, we’re bringing together the medics and clinicians,” Garcetti says. “We can go as fast as you give us those vaccines.”

Like most of the state, Los Angeles is under a stay-at-home order. But the virus continues to spread rapidly in the city despite the strict restrictions. Garcetti says that’s because LA is the state’s most densely populated metro area.

Health officials have linked Thanksgiving gatherings to a spike in positive cases. For New Year’s Eve, Garcetti says he’s leaning on the city’s police officers and building safety inspectors to enforce business closures and bans on large gatherings. And he says he is supportive if county health officials decide to implement further restrictions.

For now, though, Garcetti says slowing the spread is “less about what’s open and closed and more about our own individual behaviors.”

Ectopic pregnancy treatments can be pricy and complex, even…

Explore the Land of Enchanting Beauty Roing; All You Need to…