A Vaccine That Protects Against COVID-19 May Be Right Under Our Noses : Shots

The nasal spray version of the flu vaccine contains live but weakened form of the virus. Researchers think there’s a good chance this could help boost the body’s immunity and improve its ability to fight off pathogens such as the coronavirus. 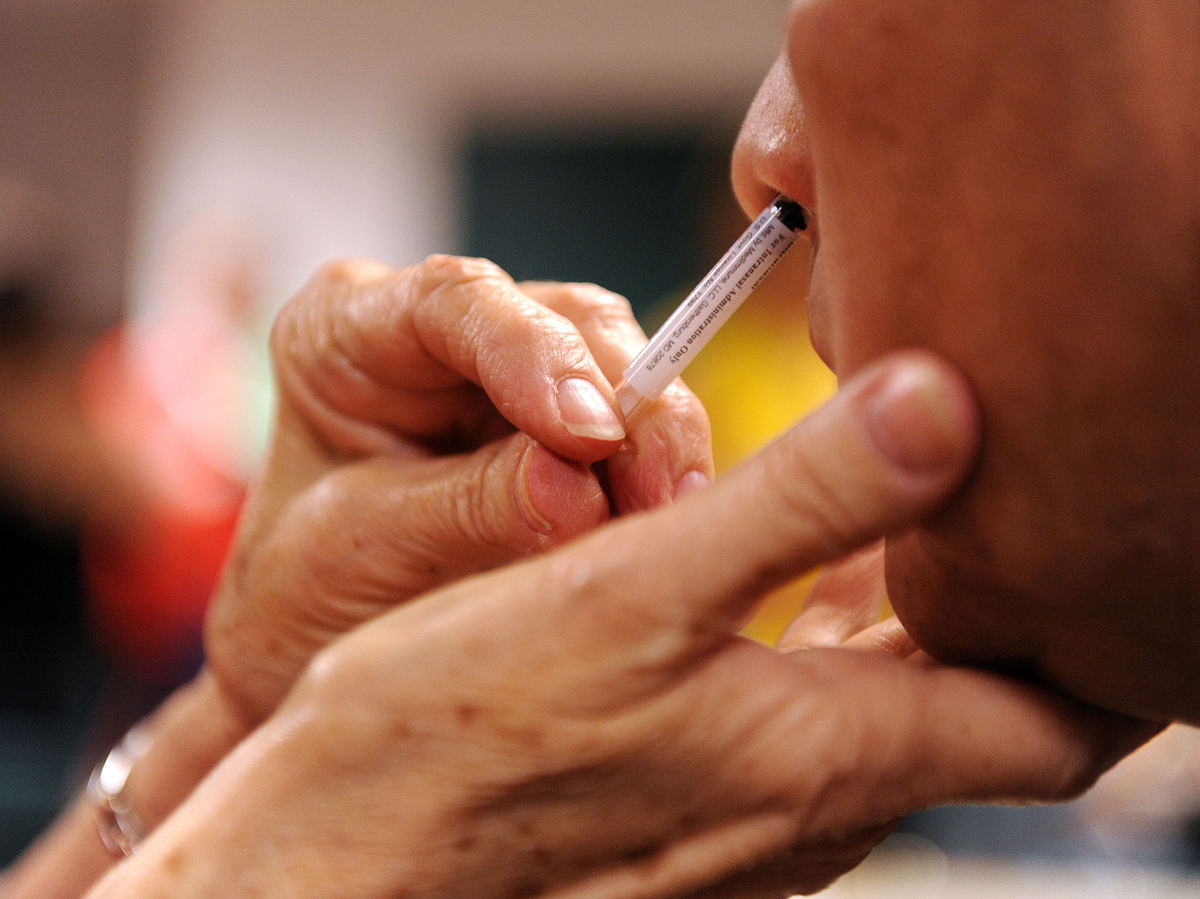 The nasal spray version of the flu vaccine contains live but weakened form of the virus. Researchers think there’s a good chance this could help boost the body’s immunity and improve its ability to fight off pathogens such as the coronavirus.

In case you were still procrastinating getting a flu shot this year, here’s another reason to make it a priority.

There’s a chance the vaccine could offer some protection against COVID-19 itself, says virologist Robert Gallo, who directs the Institute of Human Virology at the University of Maryland School of Medicine and is chairman of the Global Virus Network.

The key is getting the right flu vaccine, says Gallo, who was one of the main scientists credited with discovering HIV. “The vaccine has to have a live virus in it. The virus is attenuated so it doesn’t cause disease, but otherwise the virus is alive.”

A live virus may sound a bit terrifying, but it’s a standard way to make safe and effective vaccines. In fact, you’ve probably already had a few “live, attenuated” vaccines in your lifetime, such as the measles vaccine or oral polio vaccine.

Now scientists are just beginning to learn that these vaccines may offer some unexpected advantages to the immune system.

When developing a vaccine, scientists have a few strategies to try. They can take a piece or component of the bacteria and use that to trigger an immune response in a person. They can kill the pathogen and use its corpse as the vaccine. Or they can take a live pathogen and weaken it in the lab.

The latter are called “live, attenuated vaccines,” and over the past century, scientists have noticed something peculiar about these vaccines: They seem to offer some protection, not just from the targeted disease, but also against many different diseases, including respiratory infections.

“There’s plenty of evidence for it,” Gallo says.”The weakness is we don’t really know the longevity [of the protection]. It will probably work only for months, but we can’t say for sure.”

Take for instance, the vaccine for tuberculosis. It’s called bacille Calmette-Guerin, or BCG, and it contains a live, but weakened, strain of TB from cows.

When doctors in Sweden first started using BCG back in the 1920s, they noticed the vaccine not only reduced a child’s risk from dying of TB, but that children who got it had a mortality rate from all causes that was almost three times lower than unvaccinated children. Since the 1970s, scientists in West Africa have documented a similar pattern with both the BCG vaccine but also the live measles vaccine. In other words, they were doing something to boost the immune system’s response to many kinds of pathogens.

Recently, doctors in the Netherlands directly tested the BCG vaccine against a placebo, to see if it could help volunteers fight off a weakened form of yellow fever. The conclusion? People who received the BCG vaccine mounted a stronger immune response against the virus and cleared out the virus more effectively than those who received the placebo, the study reported.

It’s not just BCG that seems to have this effect. There’s growing evidence that any live vaccines can offer some broad, nonspecific protection, including the oral polio vaccine, measles and the live flu vaccine.

Scientists have had a hard time believing the evidence because the idea goes against the way they thought vaccines work, says immunologist Zhou Xing at McMasters University in Ontario: “It’s a new concept that has emerged in the field of immunology over the past five to 10 years or so.”

In general, vaccines work by tricking the body to produce antibodies. These molecules are very specific. They typically target and neutralize only one type of infection.

Live vaccines also work through antibodies, but they likely do something else, as well. They supercharge our body’s frontline defenders — the cells that first recognize an invader and try to clear it out before the infection gets out of control, Zhou says. Specifically, scientists think live vaccines epigenetically reprogram immune cells in the bone marrow, called myeloid cells.

Unlike antibodies, myeloid cells are nonspecific — they work on many types of invaders. And they work quickly, when the virus first enters a person’s body.

Now the big question is: Will live vaccines help a person clear out the coronavirus from their body before they get sick or before the infection becomes severe?

To figure that out, scientists around the world are currently running more than a dozen clinical trials with both BCG and the live polio vaccine to see if they offer some protection against the virus that causes COVID-19.

No one believes the protection will be as strong — or as long-lived — as that provided by a specific COVID-19 vaccine, says Dr. Moshe Arditi, who leads one of the trials at Cedars Sinai in Los Angeles.

But he says, the BCG vaccine has several advantages to a specific vaccine. It’s cheap. A dose only costs a few dollars. And we already know it’s safe. “More than 130 million kids every year — every year — receive the BCG vaccine so the safety profile has been very strong,” Arditi says.

So the BCG vaccine could be approved — and available — by early next year, he says. “It could be a bridge until we have a safe, effective COVID-19 vaccine.”

In the meantime, virologist Robert Gallo says, why not go get the live flu vaccine, if you can?

“You watch,” Gallo says. “People who get the live flu vaccine will also be protected against the COVID-19. That’s the hypothesis.”

And, no matter what, even if you get a vaccine, you should still exercise all the same cautious you would otherwise: Wear a mask, keep your distance, wash your hands and avoid large, indoor gatherings.

In Need of Mid-Week Inspiration? Watch This…

Make A Fashion Statement This Winter In Neha Dhupia-Inspired…